Because I work for a company that sells Eurail passes, and because I used to do customer service for said company, I often get asked, “Is buying a first class train pass really worth the difference in price?” So I thought I’d throw my two cents on this issue into an article here, as my most recent European train experiences are all on Italian trains.

In general, when I’m asked whether there’s enough of a difference between first class and second class on European trains to justify the added cost, I say no, there isn’t. This is partly due to my overall feeling that the vehicle is the same whether I’m paying for first class or second class, so it’s getting me there at the same speed. (It’s this rationale that will, regardless of how much smaller they keep making coach seats, probably keep me from ever paying for first class airfare – I’m just a cheap airline tickets kind of girl.)

On my last trip to Italy, however, I rode the Eurostar between Milan, Florence, and Rome in first class, because that’s the rail pass I had. I did take note of a few first class perks which I wanted to share with you, but I still don’t think they’re enough to justify the price difference – whether you agree or not is another story! 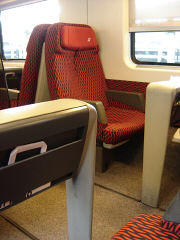 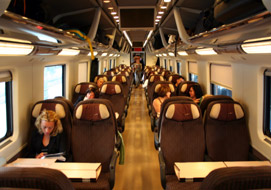 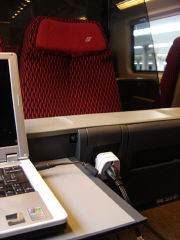 In first class you can expect to share space with Italian business travelers and American tourists for the most part, while second class is more of a mix of all walks of life (including more frugal Italian business travelers and American tourists!). A trend on more and more trains these days is to have electrical outlets at nearly every seat, in both first and second class, so if you’ve got your electrical adapter/converter handy you can recharge your iPod or work on your laptop during your trip. It’s a great way to use the time when you’re moving from one place to another.

Some trains also have a dining car, but even this isn’t limited to just first class passengers – anyone can either get something from the dining car to eat back in their seat, or (if there’s a spot in the dining car available) stay there and eat a meal. And although there is sometimes a cart in first class that comes around (like on airplanes) with free newspapers and little bags of cookies, there are usually carts like that going through the second class cars as well – you’ll just have to pay for the goodies off those carts.

So, the biggest differences between first class trains and second class trains in Italy is going to be space – you’ll get more of it for yourself and for your bags in first class – and if you check out the prices of the different classes and it’s not much, then go for it. In some cases, it’ll be a significant difference, and that’s when you’ll have to decide whether those free crackers and hard candies are worth it.

>>Read more about Italy Railpasses before you go.