How to Use the Milan Metro 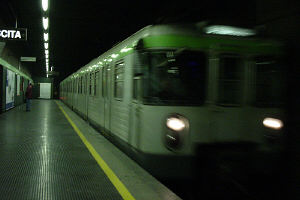 I love subway/metro systems, because they usually represent the cheapest, fastest and generally most efficient way to get around a city. What’s more, they are used by residents even more than tourists, so by riding the metro in a foreign city you get to do some great people-watching as you get from place to place.

Most cities in Italy don’t have metro systems, but one that does is Milan. It’s only got three lines, but an unfamiliar subway system can still be intimidating if you’re not used to riding underground. So, here’s my primer for how to use the Milan Metro system.

>> For more information about how to get around in Milan, see this overview guide to Milan public transportation, including buses, trams, and the Metro.

The first step, of course, is to get yourself a good map of the Metro. My favorite city maps are the Popout Maps I reviewed last year, but any Metro map will do. The best Metro maps will include not just a grid showing the network of rail lines, but also a section that has a city map with the various stops indicated so you can see precisely where in the city you would end up if you exited that station.

Here’s a sample map, but for a bigger one you can download a map from the official website here. 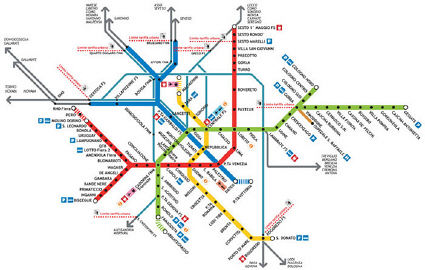 Your first assignment once you have your map is to determine your “home” Metro stop. This is going to be the stop closest to your hostel or hotel, or wherever you are staying. You will become familiar with this Metro station, as it’s where you will end up every time you leave or come back to your room. If you’re lucky, your home station will have more than one Metro line connecting to it, making it easier to access from different parts of the city – but if it’s only got one, don’t worry. Making connections isn’t difficult.

This may sound like a crazy thing to need to write down, but you’ll need to know where you’re going not just on the street level but also underground – not every station is thoughtfully named for the benefit of tourists and out-of-towners. Yes, one station is called “Duomo,” but that’s about the only one. The “Gorgonzola” stop, for instance, doesn’t put you in the center of a big block of oozy cheese. So, for any sights other than the famous Duomo, you’ll need to know which station is closest to the attraction you want to see. Most good tour guidebooks will include this information, but a city map that includes Metro stops will also be a good resource to figure this out.

There are machines in every Metro station that will dispense individual Metro tickets when you insert money, and these are available 24 hours a day (except when they’re not working!) – but if you’re unsure of the language and would rather deal with a human being, every newspaper stand I’ve ever seen in every Metro station sells individual Metro tickets. You just need to ask for “un biglietto” (pronounced, “oon bee-lee-ETT-toh”) and you’ll get a ticket good for one journey (if you want to avoid the ticket vending machines, buy extra tickets for after-hours when the newstands are closed). 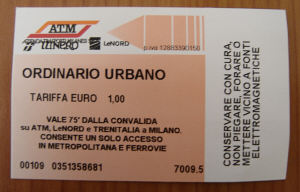 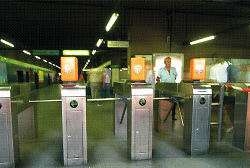 On your way toward your Metro line, you’ll see machines that you need to pass through – you can watch other travelers put their tickets in to make sure you’re doing it right, but just make sure you’re going to a machine that has a green arrow lit up on the front. A red X means it’s either not working or for those coming out of the station, not in. You’ll put your ticket in on the front of the machine, it will get a time and date stamp marked on the back and spit your ticket back out on the top of the machine. When you take the ticket, you’ll be able to pass through the gate.

While each Milan Metro line has a different color, which makes figuring out which line you want to ride easier, each Metro line goes in two directions – so your next step is to determine which direction you want to go in from where you currently are. The directions aren’t named things like “North” or “East,” but rather carry the name of the last station in that direction. For example, if your hotel is closest to the Wagner station on Linea 1 (the red line) and you want to go to the Duomo, here are the steps you’d take. (Note that all of the scenarios listed assume you’ve already bought the necessary Metro ticket for the journey!)

Yes, it’s that simple. Here’s a more complicated one – getting from your Wagner station hotel to the main train station at the stop called Centrale FS. Centrale FS is on both Linea Metro 2 (the green line) and Linea Metro 3 (the yellow line), but not your red line. Never fear, however, the trip isn’t that much more difficult to figure out.

Can you see another way to get to Stazione Centrale from the Wagner stop? If you noticed you could take the red line toward Sesto FS, change to the yellow line (direction Maciachini) at Duomo and then get off at Centrale FNM, you’d be right. And if you really have an affection for the red line you could always ride it toward Sesto FS all the way to the Loreto station, then switch to the green line (direction Abbiategrasso) for a quick two stops.

Are you seeing how it works now?

The important thing to keep in mind every time you’re figuring out the exact train you want to jump on is the name of direction you’re going. Once you get the hang of thinking of directions in terms of specific names rather than compass pointers, you’ll be able to map out your routes quickly and easily. And if you already have experience using metro systems like the one in Paris, then the Milan Metro will be a piece of cake to you – or, as the Italians would say if “piece of cake” was actually an Italian saying, un pezzo di torta.

Make the Most of the Metro

The Milan Metro is a great way to get around the city, and at only €1 per journey it’s a great deal as well. An even better deal is if you plan to use the Metro enough times during a one-day or two-day visit, you can buy a one-day or two-day Metro pass that allows you unlimited rides during that particular period. The one-day pass is €3 and the two-day pass is €5.50.

If you won’t be riding the Metro enough to make a day pass worthwhile, you can also buy a 10-journey ticket (called a “carnet,” pronounced kar-NAY) for €9.20. You can just keep that 10-journey ticket and keep re-using it in the entry gate machines until you count 10 time/datestamps on the back. At that point, you’ll need a new ticket for your next journey. 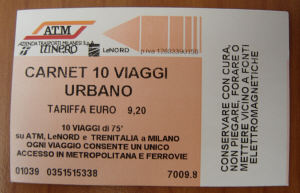 And if you’re a student, your student ID card will get you discounts on Metro travel as well, so be sure to bring it along when you’re buying tickets.

Finally, each time/datestamp permits you to make only one Metro journey in a 75-minute period, but you can make unlimited bus and tram trips within that period once you get the time/datestamp. So that one ticket really gets you quite a bit of public transportation access!

Here’s the back of a stamped metro ticket: 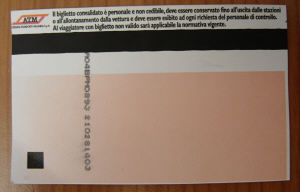 For more info, here’s the official ATM website (that’s the company that runs public transit in Milan), and read up on the colors of the Milan Metro system, too.