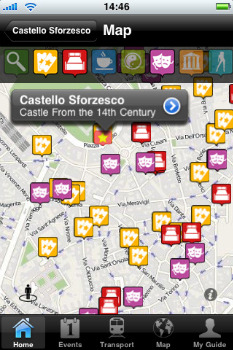 Milan may not be the most touristy city in Italy, but it hosts countless visitors each year – many of them business travelers. And with more travelers – both those who travel for pleasure and for business – bringing tech tools along on their trips, it only makes sense that there are quite a few Milan iPhone apps that are handy for travelers to have with them.
Some of the apps listed below are going to be more useful if you’re living in Milan for a period of time rather than just visiting for a few days (especially apps like the one charting traffic cameras), but even a brief trip to Milan can be enhanced with the Milan apps listed here. I’m lumping most of the apps into a general “travel” category, but there were enough that were specific to getting around in Milan that those are grouped together in the second section.
>> This is part of a series on Italy iPhone apps – so this Milan-specific article doesn’t include things like Italian language apps or apps that are useful throughout the country. For those more general apps, see my list of Italy iPhone travel apps. And for other city/region-specific lists of apps, here are the lists of Rome iPhone apps, Venice iPhone apps, and Florence/Tuscany iPhone apps.

Marvelous Milan & More
$3.99
This is a city guide for Milan, but it’s more than that. All the big sights are included, plus plenty of other things to see and do (Museum of Razors? What?), and several nearby cities are also part of the app in case you’re in the area for awhile and need some day trip options. The app even includes helpful tips like ways to get in to see The Last Supper even if you haven’t made advance reservations and it’s sold out. I genuinely love Milan, and it’s pretty clear that the author of this app likes the city, too. It’s very easy to navigate, sort-able by category, cost, and district (among other things), and lays every place discussed on a Milan map.
Note: I was given a code to try this app for free, but my opinions are my own.
Milan City Travel Guide
$4.99
The Milan City Travel Guide from eTips has a few things going for it. For one, it’s completely offline – so you won’t rack up roaming charges and it works on an iPod Touch just as well as an iPhone. For another, in addition to information you’d expect from any city guide (attractions, hotels, restaurants, tips), it also offers ideas for itineraries of specific amounts of time – and those kinds of suggestions can be really helpful. The app also includes some Italian phrases with audio, and zoomable maps of not just Milan but also nearby cities like Como, Bellagio, and Bergamo.
Milan Travel Guide Offline
$3.99
The cityscouter Milan Travel Guide Offline app includes attractions, transportation lines, hotels, restaurants, bars, and more – and if you update it whenever you have an internet connection it will also give you a calendar of events going on while you’re in town. The app works entirely offline – you can use the app without incurring roaming charges and then simply get the event updates when you’ve got an internet connection.
Milan: Wallpaper* City Guide
$3.99
The Milan version of the Wallpaper* City Guides is, like the other Wallpaper* guides, put together by the magazine’s experts. It’s a guide for – as the developers put it – “the design conscious traveler.” They’re not talking about fashion here, although there are shopping tips included. Instead, this app focuses in on what the Wallpaper* experts think are Milan’s best hotels, bars, and restaurants, with an eye toward finding the “most enticing architecture and design” in the city.
Tour4D Milan
$3.99
For a fun twist on the usual travel guides, there’s Tour4D Milan – as you can probably guess, it offers 3D images of the city’s major landmarks so you can see them from all angles as well as read details about them. The landmarks included in the app are included on a Milan map, and you can use the iPhone’s GPS feature to figure out exactly where you are in the city.
Domus Architecture Selections: Milan
$4.99
Like the Wallpaper* guide, this Domus Architecture Selections: Milan app is meant for people who are interested in architecture and design. This isn’t a travel guide to Milan, but rather a guide to 60 architectural points of interest in the city, four walking tours with an architecture focus, six bookstores architecture enthusiasts will enjoy, and more.
Eventi Milano
FREE
For an app that gives you updated information about just what’s going on in Milan, there’s the Eventi Milano app. You can search based on specific categories to find just the things you’re interested in, or hunt by date to find out what’s going on on a given day or night. The listings come from the tourism.milan.it website, and the information is available in English and Italian.
Ristoranti di ViviMilano
$4.99
Are you primarily interested in finding out where to eat in Milan? Then that’s where the Ristoranti di ViviMilano app can help. The app includes listings for more than 1,000 places to eat and drink, including nightlife hotspots, and it allows you to find the closest ones to your current location as well as look up places by price or type of cuisine. The app is entirely in Italian, but even with a minimal understanding of the language you should be able to get some use out of it.

MuoviMi
FREE
For one all-encompassing app that covers all public transportation options in Milan, look no further than MuoviMi. You’ll get real-time updates about the wait time at 3,000+ bus stops, information about 50+ bus and tram lines, and all the city’s Metro lines. To get the wait updates you will need an internet connection, so if you’re planning to switch your non-Italian iPhone into airplane mode while you’re in Milan that aspect of the app won’t work for you – but if you’ve got a good international data plan or an Italian iPhone you’re all set. And the rest of the app, showing stops and routes for all the transit lines, will work whether the phone is in airplane mode or not.
Milano Metro
$2.99
I think Milan’s Metro is super easy to use, and with only three lines it’s hard to get too lost – but having the Milano Metro app certainly does take the guesswork out of it. With this app, you can use your iPhone’s GPS feature to locate the Metro station closest to you, and also to determine the best route from where you are to where you want to go. You can also pick stations based on a list, if you’ve got all the GPS and whatnot of your phone turned off or you’re using an iPod Touch.
Milano Metro AR
$1.99
To make your Milan Metro map even cooler, download Milano Metro AR and use augmented reality to see the closest Metro stops. Hold your iPhone 3G up (it doesn’t work with other versions of the phone) and view the city through the iPhone’s camera – the app will point out the Metro stations around you. There’s also a map of the city with Metro stations marked.
iBikeMi
$0.99
Milan is one of the cities in Italy that has a bike sharing program, and this is the app associated with the program. With iBikeMi, you’ll be able to find the closest bike station to your current location (either to pick up a bike or find a place to drop one off), and you’ll also know whether there are any available bikes or docking slots at the station you’re going to. Because of the real-time updates, this app does require a data or internet connection to work.
Traffic Milano
$1.99
For those of you unfortunate enough to have to drive in and around Milan on a regular basis, you’ll know the city’s traffic is a force to be reckoned with. If you want to see what your commute will be like before you hit the road, the Traffic Milano app may help – it shows you traffic cameras in Milan and you can choose whichever camera you want to see. Make a list of “favorites” for the routes you use often. An internet/data connection is required for this app.
Milano Ecopass
$1.99
Milan is one of the cities that has implemented an “Ecopass” system where anyone driving into the city must pay a fee, and people who drive more fuel-efficient cars pay less, etc. But unless you know the city well, you could easily drive past the boundary of the Ecopass zone and not know it – and then be fined for not paying the fee. With the Milano Ecopass app, your iPhone will alert you when you’re near the zone and let you pay the Ecopass fee via text message or phone.