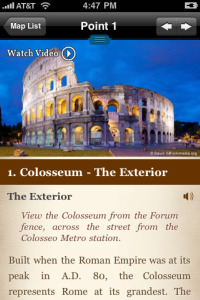 The whole world, it seems, is on the “apps” bandwagon. Whether you love the iPhone apps commercials or hate them, there really does seem to be an app for everything – and with new apps being added to the iTunes store every day, it’s hard to sort through them. Still, I’m attempting to find the best iPhone apps for traveling in Italy that I can to make it easier for you to use these fun tools for your trip.
In this article, you’ll find iPhone apps for Rome travel. And just as it’s called the “Eternal City,” it seems like it would take an eternity to list all of the Rome-related apps that exist. So I’m going to stick to the ones I think are most comprehensive, most useful, or just fun (and as you’ll see, that’s still a pretty long list). I’m not the only one who’s covered iPhone apps for Rome, either, so check the links at the bottom of this article for the apps other Italophile travelers love.
>> Also note that I’m not including any Italian language apps or phrasebooks here, so you’ll have to click over to the main iPhone apps for Italy travel article I wrote to find those.

Lonely Planet Rome City Guide
$5.99 (current sale price)
Lonely Planet’s City Guide apps are crammed with information, though a little cumbersome to navigate. It does allow you to leave the heavy guidebook at home, however, and it works completely offline – including the Rome maps. You can use your phone’s GPS to use the navigation feature so you don’t get lost.
DK Top 10 Rome
$7.99
While I’ve long been a fan of the DK books for their graphics and pictures, I almost never carry them with me when I travel because they’re so bloody heavy. DK iPhone apps to the rescue! Don’t be fooled by the “top 10” name – this isn’t just a list of one person’s 10 favorite places in Rome, it’s a collection of DK “best of” lists for things like top attractions, shopping, restaurants, etc. The app also includes bus routes, a currency converter, and more than 50 maps – and it’s available offline.
Rome: A Frommer’s Complete Guide
$4.99 (current sale price)
More of a Frommer’s fan? Here’s their Rome guide app, which has everything you’d find in their printed guidebook. There’s information on attractions, suggested itineraries, walking tours, restaurants, shopping, hotels, nightlife, and more – and it’s all available offline.
Rick Steves’ Ancient Rome Tour
Rick Steves’ St. Peter’s Basilica Tour
$1.99 each (current sale price)
Anyone who’s a Rick Steves fan will appreciate these two audio-guide tours of Rome. You can use them without the audio feature (handy if you’ve got one iPhone and multiple travelers) and just read the explanations at each point of interest, or you can plug in your headphones and let Rick talk you through what you’re seeing.
SmarthistoryTravel: Rome, a First Look
$4.99
Since the majority of the people who visit Rome each year aren’t art historians (and we don’t typically travel with them), it’s easy to walk past some of the city’s amazing art and artifact without understanding its importance. Now with this SmarthistoryTravel app it’s like you’ve got a pocket-sized art historian with you at all times. The app covers Rome’s great art, from the Ancient, Renaissance, and Baroque periods, in museums and churches throughout the city. It’s an excellent travel guide for the art in Rome.
LUXE Rome
$9.99
If you like LUXE guides, then you need their Rome guide for your iPhone. Some of the categories covered in this app are accommodation, spas, shopping, dining, and activities. The app has maps available online or offline, and everything is searchable. Plus, you get free updates anytime the information changes.
Rome2Go
$0.99
This app contains more than 500 articles about traveling in Rome, and a zoomable map of the whole city that you can use to search for street names. The information all comes from Wikipedia (so it may not be 100% accurate or complete), but it is available completely offline, which is a perk.
Free Rome
$0.99
Look past the irony of an app detailing all the free stuff to do and see in Rome not actually being free itself, because at $0.99 it’s a great deal for anyone who’s on a serious travel budget. There are more than 80 things featured in the app, including free museums, and brief write-ups about each one.
Touring Rome
$5.99
This app is produced by Touring Club Italia (sort of Italy’s AAA), and includes 14 Rome travel itineraries, a detailed map, and listings for more than 800 points of interest.
When in Rome
$4.99
This app includes 140+ listings broken down into a few categories – but you won’t find any attractions here. This is about things Romans like. You’ll find recommendations for coffee, pizza, gelato, views, shopping, etc.
ItalyGuides: Vatican Museums Tour
$4.99 (current sale price)
I’m a fan of a guided tour at the Vatican Museums, because they’re massive and it’s easy to overlook the “important” stuff if you don’t know what you’re supposed to look for. But if you prefer a self-guided tour, this is a good option. It’s an all-audio guided walk through the Vatican Museums, and if you’d like you can test the “lite” version for free before buying the full app.
Rome: Ancient City
$4.99
This app is by Walki-talki.com, and it’s an audio-guided walking tour of ancient Rome. It’s a 1.5-hour tour that covers the Roman Forum and Colosseum, along with a few other sights right around that area.
Rome Walking Tours and Map
$4.99
This collection of audio-guided walking tours includes eight different tours of different aspects of the city, from ancient Rome to the Vatican to Roman parks to a theater walk. If you enable the GPS feature on your iPhone, the app will indicate on the map whether you’re going in the right direction, too. There’s a free “lite” version you can test before you buy the full app.

Rome’s Leonardo da Vinci Airport Guide
Rome’s Ciampino Airport Guide
Leonardo da Vinci Airport app – $0.99; Ciampino Airport app – FREE
For those who are regular travelers through either of Rome’s airports – or those who just like to know the lay of the land before they arrive – there are apps covering both the big Leonardo da Vinci Airport (AKA Fiumicino) and Ciampino, Rome’s secondary airport. Both apps have information about the terminals and what’s available for ground transportation.
Rome Bus Guide
FREE
There are a few drawbacks to this app, especially for travelers who have iPhones in “airplane mode” and aren’t on some rogue WiFi signal, but it’s a favorite of many people who spend time in Rome so I had to include it here. When you walk up to a bus stop in Rome, look for the number on the bus stop’s yellow sign in the lower left corner. Type that number into this app, and you’ll be told when the next bus is coming. That’s the brilliant part, there’s no denying it. There’s no map included, so you’ll still need to have a good map of Rome’s bus lines if you’re not familiar with the city, and you should also note this app only works from 06:30 until 22:00 Rome time.
Rome Metro 10
$2.99
This app doesn’t give itself enough credit in the name, because it’s not just about the Metro in Rome – the app also covers the tram, urban, and regional train systems in the city. Rome Metro 10 works completely offline, letting you choose a whatever station you’re close to, but it also has a GPS location feature so you can let the app figure out what stations you’re close to and where you are. The maps in this app include both transit markers and also indicators for attractions, restaurants, hotels, parks, shops, etc.
Rome Metro
$2.99
This is another Metro app for Rome, although this one is just about the Metro, and it’ll help you plot out the best route for wherever you’re going. You can use it offline or let it tell you which stations you’re near using GPS.
Ndrive Rome
$4.99
Should you be daring enough to drive in Rome, the last thing you want to do is fight with a paper map. And if your rental car doesn’t have a GPS system in it, you can turn your iPhone into a GPS navigator with Ndrive Rome. What’s more, you can use this app to get around the city while you’re walking, too. The app includes both Rome’s city center and Vatican City, and the maps are aerial photos so they’re realistic to what you’re seeing.
>> Note: There’s an iPhone app for Rome’s bike-sharing program, too, but it’s not available in the US iTunes store. If you have access to iTunes Italia, the app you’re looking for is called “iBike.”

Visual Rome
$5.99
I don’t know about you, but I have a hard time picturing what Roman ruins looked like when they weren’t, well, ruins. With Visual Rome, you don’t have to do it alone. The images in the app fly over the city, and when you get to a building you want to know more about you tap it – voila, there’s a 3D reconstruction of what it once looked like. There are 27 “landing spots” in the app, and information on more than 100 buildings.
Drinking Water
$0.99
Rome has hundreds of drinking fountains throughout the city that are exceptionally handy for refilling water bottles or just taking a quick sip (especially during the hot Roman summers). This app has markers on a map for more than 400 of the fountains in Rome. It does require a cell data or internet connection to work, however.
Aperitivo
FREE
Aperitivo is one of my favorite ways to spend an evening in Italy, and the Aperitivo app for Rome is an excellent guide to the city’s “happy hour” spots. You can find out which ones are close to you, what the price range is, and there’s a map as well.
Rome!!!
$2.99
Can’t get enough of looking at Rome? Want to daydream about what you’ll see before you get there? This app is all photos of Rome, with hundreds of images that you can browse through – and you can use them for the wallpaper on your iPhone, too. (Note that the app’s name includes three exclamation points. I wouldn’t write that otherwise, I promise.)
Roman Emperors Pocket Book
$0.99
Keep track of who built what monument with this app, listing biographies and background information for more than 200 Roman Emperors.
Popes Pocket Book
$0.99
While you’re into keeping track of stuff, this app will help you keep track of who commissioned what artwork. It contains biographies on more than 490 Popes.
Radio Vaticana
$3.99
If reading about Popes isn’t enough for you, then use this app to tune into Radio Vaticana in your native language.
Roman Mythology
$0.99
For a better understanding of who and what the ancient Romans were worshipping and attempting to placate with those big temples and whatnot, brush up on your Roman mythology with this app. There’s information on more than 200 gods, heroes, and places.
iQuoteRome
$3.99
There are so many apps that fall into the “this will help me annoy my friends” category, and I kind of think this is one of them. But it amuses me anyway. The app delivers a random Latin quote with every tap/swipe/shake, along with its English translation.
The History of Rome: Audio Podcast App
$1.99
I’ve been told by two podcast aficionados that this is one of their favorite podcasts out there – and neither of them is an Italophile. So if it’s good enough for them, then it’s surely good enough for anyone who’s interested in Roman history. This app lets you stream the latest episodes of the podcast through your iPhone.

Other Articles on iPhone Apps for Rome

As I mentioned above, there are other lists of Rome travel apps for the iPhone out there, some of them written by Italophile pals. So here are links to those articles in case you’ve got extra room on your iPhone after downloading the ones listed above.