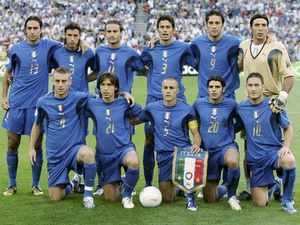 As I’ve mentioned in the past, I wouldn’t ordinarily describe myself as a sports fan. I mean, I like to watch a few sports now, but before marrying a sports fan I was pretty much indifferent. And the sports I’ve found myself most interested in now, of course, are some of the ones the husband follows most closely. (Although I can’t get into motorsports, no matter how much he loves it.) It is with this background that I bring my own relatively uninformed but no less enthusiastic introduction to the upcoming Euro 2008 soccer tournament.

Euro 2008 is shorthand for what is technically called the 2008 UEFA European Football Championship. The UEFA European Football Championship is a tournament that takes place every four years, between World Cup competitions. So, we had the last World Cup in 2006 (which Italy won, of course), we’ve got a Euro championship this year, the World Cup will happen again in 2010, and then another Euro competition in 2012. It’s a clever way to keep people who mainline international soccer tourneys from slitting their wrists during the lull between World Cups.

More importantly for those of us who are Italophiles first and sports fans second, it’s a great opportunity to get enthusiastic about a national Italian team without having to get bogged down by the politics associated with choosing a Serie A team to root for. See, there are connotations for being a fan of Lazio as opposed to Roma, and if you’re not familiar with them picking your favorite team can be a daunting task. With the Italian national soccer team, however, it’s easy – you just cheer for the Italians and everyone’s happy.

Euro 2008 is taking place this June, and although it’s being held in stadiums in both Austria and Switzerland, you can bet if you’re traveling to Italy in June you’ll have plenty of opportunities to cheer on the home team. I don’t pretend to fully understand the tournament system for the Euro Championships, but I know that in the first round Italy is in a tough group (with Romania, France and the Netherlands) – and they’ve got to end up either first or second in that group to advance to the next stage.

So, if you’re anywhere near an Italian bar or cafe on the 9th, 13th or 17th and they’ve got the game on TV, prepare to grab a drink and join the crowd. It’s an experience you’re not likely to forget, and with stiff competition like this for the Italian team, they’ll need all the extra cheering they can get.

(As an aside, you’ll notice that instead of the Italian flag’s colors, the national team wears blue – which is why they’re called the “Azzurri,” or “the blues.” The color is a reference to the Savoy family, which once ruled northern Italy and helped to unify the country in 1860. Their family color was the azure blue which eventually became the color associated with every Italian national sports team.)

To keep up with what’s going on in Euro 2008, you may want to check out the Euro 2008 blog – it’ll have previews and analysis leading up to the tournament, and then during the tournament you’ll find videos, photos, and more analysis from folks who are way more informed about this stuff than I am. If you’re only really interested in the Italian team (and I don’t blame you), there’s the Italian national team’s blog, which is unabashedly biased toward the Azzurri.