I’ve written before about my experience visiting the Leaning Tower of Pisa, and even about how to avoid the lines by buying tickets to climb the tower in advance. But what I haven’t done is posted the most useful visitor’s information. So, without further ado… 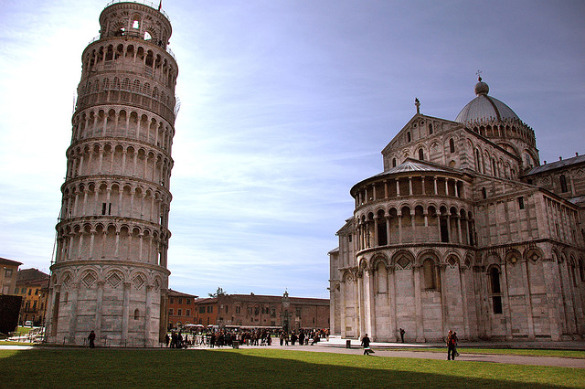 Pisa‘s famous Leaning Tower is simply the bell tower for the adjacent cathedral – cathedrals all over Italy have bell towers, and many of them are also leaning for one reason or another. This is one little fact the folks in Pisa would rather you don’t know, but it’s true. Of course, if you try to convince your friends that you’ve seen plenty of leaning towers in Italy, if you haven’t seen the one in Pisa they’re not going to be all that impressed. Besides, you’ve seen everyone else’s pictures of themselves “propping up” the Leaning Tower, why not have one of your own?
Construction on the Tower of Pisa, called “La Torre di Pisa” in Italian, began in 1173 and went on more or less for about two hundred years. The ground beneath the tower was soft, and so even before the building was near completion it had already started to tilt. It was noticeable enough that the builders even tried to compensate for it by angling the new construction differently than the old construction – if you look at the tower from the appropriate direction you’ll see it’s not perfectly straight on one angle. The Leaning Tower has been closed to visitors at various times as engineers worked to shore up the base, fearful it would eventually topple completely. If a visit to Pisa won’t be complete for you without climbing the tower, check in advance to make sure it’ll be open when you go.
>> Book a tour of Pisa before you go so you don’t miss anything
>> Spending more than a couple hours in the city? Browse and book these Pisa hotels and cheap hostels in Pisa. 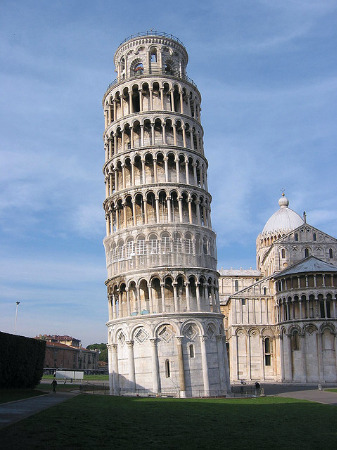 The opening hours for the Leaning Tower of Pisa are:

The last entry to the Tower of Pisa is a half-hour before closing time.
>> It’s been pointed out to me that there are a few days in June not accounted for according to the above list of opening hours. I’ve taken them directly from the website of the governing body which organizes tourism in the Piazza dei Miracoli, and I’ve checked several times – they have, indeed, left a few June days out of their schedule. Another website indicates that the later opening hours, from 08:30-23:00, are from June 14 through September 15, so it’s probably safe to assume that the later opening hours begin on June 14 rather than June 17 – but it doesn’t hurt to double-check with the ticket office in Pisa.

Getting to the Leaning Tower of Pisa 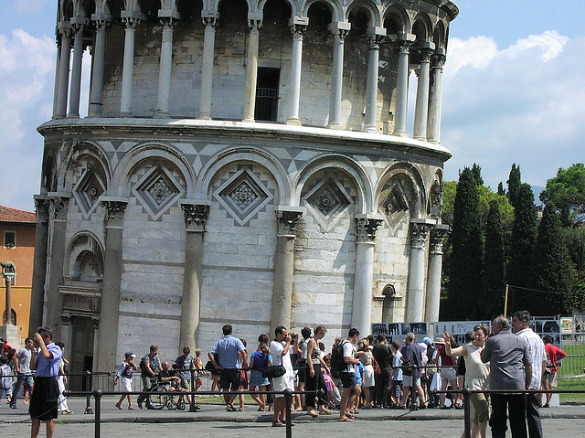 It’s easy to reach the Leaning Tower from the Pisa train station, either by walking or by taking the bus or a taxi. Bus lines 3 and 4 run from Pisa Centrale, the main station, as does Shuttle Bus A – all of these will drop you near the Tower. Taxis are plentiful as well, and the ride isn’t very long. The buses and taxis are all available across from the train station’s main entrance.
If you’re in the mood for a walk, leave Pisa Centrale’s main entrance and go toward Piazza Vittorio Emanuele. Turn onto Via Crispi and go as far as Ponte Solferino. Cross the bridge and continue until you read Via Roma. Turn onto Via Roma and continue until you reach Piazza dei Miracoli – the home of the Leaning Tower. The walk will take you just under a half-hour.
If you’ve come into Pisa’s San Rossore train station, however, it’s only a five minute walk from where the subway stops. Take the subway from the train station and get out through Piazza Fancelli. Walk to Via Andrea Pisano, turn left and continue until you reach the Piazza dei Miracoli.

Tickets to the Leaning Tower

Tickets to climb the Leaning Tower of Pisa cost €15 (€17 if you book online in advance), and the proceeds go to the preservation of the monuments themselves. 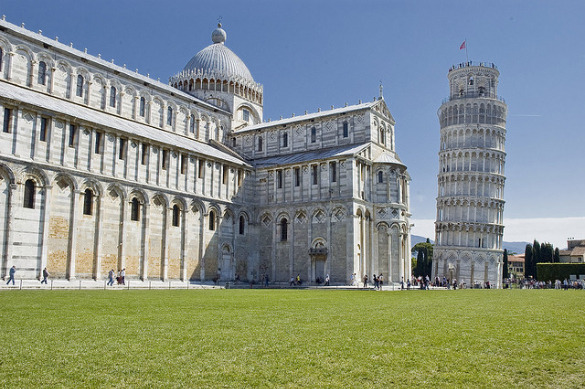 With any extra time, a visit to Pisa’s Cathedral and Baptistery are highly recommended as well. Neither is as famous as the Tower, so the lines are shorter, and both are lovely. The Baptistery is also the largest in Christendom.

The opening hours for Pisa’s Cathedral and Baptistery are:

Prices for the Cathedral and Baptistery are markedly lower than the Leaning Tower, which makes them even more enticing. It’s only €2 to get into the Cathedral, and the Bapistery will cost you €5. Or, you can get a combo ticket which includes both the Cathedral and Baptistery for €6. But if you happen to be visiting during the low season, take advantage of the fact that from November 1 through March 1 it doesn’t cost a thing to get into the Cathedral.
>> The official website for the leaning tower as well as the other sights of the Piazza dei Miracoli is here.
photos, top to bottom, by: McPig, Paul Mannix, tiseb, JackVersloot