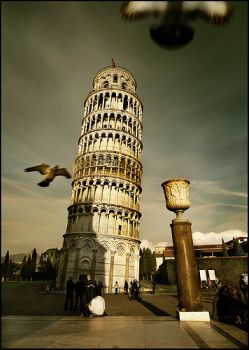 Pisa is one of those cities that every traveler who sets foot in Italy must see at one point or another. The city’s famous leaning tower is one of the most recognized symbols of Italy, so it makes sense that it’s so high on most visitors’ to-do lists.

The only trouble is that for most people, Pisa is little more than a two-hour lunch break en route from one city to another, where you dump your bags at the train station and head straight for the tower, climb to the top, take your photos, and leave (I know – I’ve done this). Consequently, the area right around the tower can be incredibly crowded, and the shops and cafes that line the beautiful piazza are usually really overpriced. But if you dig beneath the surface a bit, you’ll find that Pisa is actually a pretty average – and pretty nice – Italian town.

In addition to the enormous and pretty piazza that surrounds the leaning tower and adjacent cathedral, Pisa is also known for its university. Having a large student population gives the city a vibrant quality, and means that if you’re anywhere near the university you’ll be surrounded by activity whether you run into big crowds of students or not.

Plus, students need affordable accommodation and food options, so once again – get away from the tourist crowds around the leaning tower and you stand a much better chance of finding some downright bargains in the dining and sleeping departments.

Where to Stay in Pisa

As mentioned, most people visiting Pisa do so for a few hours and then high-tail it onto their next destination. But as is the case with every other popular day trip location in Italy, Pisa improves if you stay the night. You’ll get to see the city without the tourist crowds, both later in the evening and early in the morning, and will be able to appreciate that it’s more than just a few hunderd square meters of flawless grass and a cock-eyed tower.

Things to Do in Pisa

Okay, yes – I know that most of you are just going to make a beeline for the tower and then leave, and I don’t blame you. I’ve done the same thing. But on the off-chance that you’re spending a night in Pisa, or even just staying more than an hour or two, there are a few other things you might consider adding to the itinerary.

>> Gloria of At Home in Tuscany has a great post all about transportation in Pisa, including what buses to take to/from the Leaning Tower.