Search here for great deals on cheap airfare to Pisa 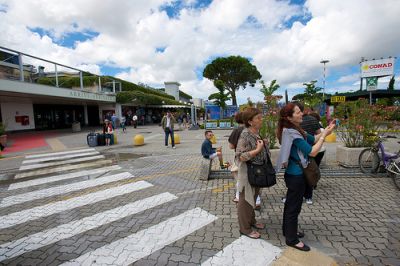 Whether you’re planning an Italy trip that starts in Tuscany or one that has you staying in Tuscany the entire time, it makes sense to try to get a flight that requires as little ground transportation as possible to get where you want to go. For many people, that means looking up flights to Florence, Tuscany’s capital – but while Florence has an airport, it’s not the biggest or busiest airport in the region.

The primary international airport in Tuscany is actually in nearby Pisa. The city with the most famous leaning tower in Italy is 42 miles as the crow flies from Florence, and train trips between the two cities take roughly one hour. Those planning a vacation in the Tuscan countryside will likely be better off renting a car to get around the region, but if you’re sticking to the main cities and towns you can get around easily by train and bus.

The airport in Pisa is called Galileo Galilei Airport (PSA), although it’s also sometimes called the Pisa-San Giusto Airport after the name of the part of Pisa where the airport is physically located. It lies less than one mile from the city center, so it’s very easy to get in and out of Pisa easily from the airport.

Transportation options to and from Pisa’s airport include buses and trains – in fact, there’s a train station at the airport that connects with not only Pisa’s central station but also the central station in Florence. There are buses from the Pisa airport that will get you to all the big Tuscan cities, including Florence, Lucca, and Siena, as well as into central Pisa. There are also several car rental companies at the airport.

Among the big airlines that serve Pisa are Air France, Alitalia, British Airways, and Delta. Most of the airlines that fly in and out of Pisa are smaller carriers and budget airlines. If your itinerary will include a layover in Europe en route to Pisa, you might look into switching to a budget airline for the last part of the trip.

>> Find out what budget airlines fly to Pisa

How to Find Cheap Airfare to Pisa

Finding cheap flights to Italy is a challenge most of the year, but it’s even more challenging if you’re trying to fly directly into a smaller airport – in other words, an airport other than the big ones in Rome and Milan. If your trip is going to be concentrated in Tuscany or central Italy in general, however, it’s worth trying to see if you can fly into Pisa to get to where you want to be more quickly.

Here are some tips to help you find cheap flights to Pisa: