Milan for the Blind 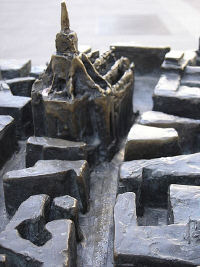 Although I was based in Milan during my last trip to Italy, I was gallivanting around the country for roughly half of the entire trip. So, although I do know Milan quite a bit better than I did before, I still feel like there are surprises waiting for me around every corner. One of those surprises was actually discovered by the husband, who pointed it out to me later. It’s a little surprise I completely fell in love with, even more so because it’s unassuming and looks like almost no one pays attention to it. It’s Milan in braille.

Tucked to one side of the grand pedestrian walkway that is the Corso Vittorio Emanuale II, leading from the Duomo to the Piazza San Babila, is a small pedestal with what looks like a miniature representation of central Milan on the top. It looks crudely done at first glance – you can recognize the Duomo, for instance, but you might think it’s a pretty half-hearted attempt at making it realistic-looking. The reason for this is clear once you get closer. Central Milan’s streets and major monuments are all marked in braille, as the whole thing is meant for blind visitors to get an “overview,” if you will, of the city. 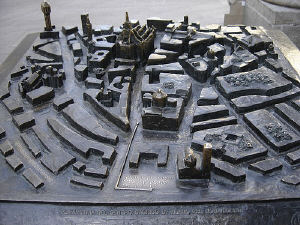 I particularly loved noticing that there are certain parts of the braille Milan which have been rubbed to a polish – including the top of the Duomo – while the rest of the cityscape is a much darker color. Some of the braille appears more “read” than others, as some of it is darker and looks untouched while others are a bright coppery color. That made me wonder what those brighter notes said. 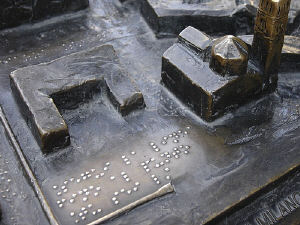 While you could walk along the Corso Vittorio Emanuele II and never see Milan for the blind – even if the street were nearly empty – it’s a fun little treat while you’re out and about.

And check out more of the weird & wonderful Milan sights I’ve written about, too!

If anyone knows anything more about the Milan in braille, I’m very curious! Email me or post a comment below!

How to Find Milan for the Blind 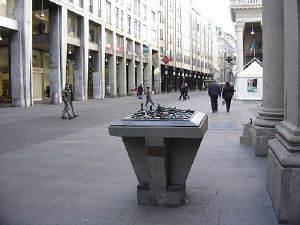 If you’re in Duomo Square, walk down the left-hand side of the cathedral (as you’re facing it). At the back of the cathedral a big pedestrian avenue veers slightly off to the left – that’s Corso Vittorio Emanuele II. It’s lined with shops and cafes (with lots of outdoor tables, great for people-watching), and is often very busy with tourists and locals alike. Watch out for bicycles.

Continue on Corso Vittorio Emanuele II until you’ve almost reached the Piazza San Babila – you’ll be able to see the modern water feature (it’s kind of conical in shape, like an upside-down ice cream cone, with a ball at the top) at the end of the Corso. Before you reach the piazza, walk along the left-hand side of the Corso and you should see the pedestal with the mini-Milan on top. It’s not quite under the covered area in front of the shops, but it’s right next to it.

If you’re starting from Piazza San Babila (or coming out of the San Babila Metro stop right there), head for Duomo Square along the Corso. Walking along the right-hand side, but not underneath the covered area, you should run into the braille Milan.