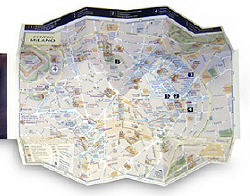 When I travel, I try as hard as humanly possible to not stand out like a tourist. I’m well aware that I’m usually instantly recognizable as an outsider, but if I can pass for at least semi-local-looking some of the time, that makes me happy. Toward that end, I don’t carry big, unwieldy folding city maps when I’m walking around an unfamiliar place. But I also don’t go map-free. Instead, I opt for maps that fold themselves and tuck in and out of a pocket in a flash – they’re pop-up maps.

My favorite maps are made by the Map Group, a British company, who I’ve decided are geniuses when it comes to design. They’ve created a series of maps that are smaller than an average postcard and yet usually contain four or five maps of a city or region. In the folds of the map, there are directories to help you find major streets and monuments, and there’s usually either a map of the bus and metro lines or indications on the city map where the stops are. If the touristy parts of the city aren’t that big, there may also be a map of the region surrounding the city you’re in, too.

I have the Popout Milan and Popout Rome, and I’m quite sure I once had the Popout Florence at one point (I can’t put my hands on it at the moment). There’s also a Popout Venice, although I tend to think any map of Venice is more a hindrance than a help, and a Popout Naples. What’s utterly brilliant about these little maps is that they fold out to reveal several different maps of the city and the surrounding area, including detailed maps of the most touristy areas and usually a map of the public transportation network. When you want to find your way somewhere, you pull out your little pop-up map and open it at the hinge. Open each side one more time to reveal different sections of the city. There’s no fussing with folds, and within seconds you’re on your way and your map is tucked discreetly back in your purse or pocket.

The Map Group’s website is being redesigned as I write this, so there isn’t an easy way to check out their products without going to an online retailer (like the ones I’ve linked to in the paragraph above), but check back with their official site later to see all the products they offer. And if you’re looking for other cities around the world, they have popout maps for most of the world’s major tourist destinations. Who said pop-ups were just for kids?

Find more information about good Italy driving maps if you’re planning to do any of your own motoring around the country.