Naples at a Discount: Campania Artecard 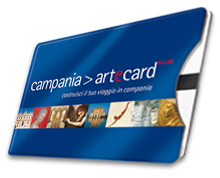 Naples has long been a less expensive destination to visit than the more popular cities in Italy, even during its busiest season – but what budget traveler would turn down an opportunity to save even more money on a trip to Naples? Depending on how long you’re planning to stay and what’s on your itinerary, you can save quite a bundle simply by picking up a Campania Artecard, Naples’ tourist discount pass.
The up-front cost of a Campania Artecard may make some shoestring travelers balk, but the pass more than pays for itself if you’re visiting some of the many not-so-cheap attractions in and around Naples in the Campania region (I’m lookin’ at you, Pompeii) and if you’re using public transportation to get around.
Here’s a breakdown of what’s covered by the Campania Artecard, how it works, what it costs, whether it’s worth it, and how to get one.

What the Campania Artecard Covers

Quite frankly, it would almost be easier to make a list of what the Artecard does not cover in and around Naples. It’s an astonishingly long list of museums, churches, archaeological sites, and historic monuments. Which ones your card covers will vary slightly depending on which card you purchase (see more about your options below), and the different cards can be a bit confusing – but the variety of cards also means there’s more likely to be one that suits your itinerary exactly. In other words, you’re not stuck paying a high price for one Naples pass that includes a bunch of extras you won’t use.
Again, this will vary depending on the card you get, but in some cases the Artecard will grant you free access to the first 2 or 3 sites you visit, followed by a 50% discount on all sites after that. In other cases, the Artecard will grant you free access to all the sites included on that particular card. And most cards also include free access to public transportation as well.
The Artecards come with a handy booklet (in both Italian and English) detailing how to use the card, what’s covered, and a bit of tourist information about each of the sights included on the card. With each listing, there’s both the regular entry price and what the price is at the Artecard reduced rate. There are also a few maps in the back indicating popular tourist routes that make good use of the Artecard.
The different Artecards you can get are:

Some of the major attractions included on the Artecards are:

How to use the Campania Artecard

Each Artecard has a unique bar code on it which each attraction will scan when you present it. When you purchase your card, it comes in a clever little card protector/case, which helps make sure it doesn’t get damaged before you’re done using it. Just as you would fill out an Italy Rail Pass before you could use it, you’ll fill out your Artecard with your name and the start date for its validity.
If you’ve purchased a card that grants you free access to 2-3 sites, that’s logged in the system so the person at the ticket counter will know simply by scanning your card’s bar code when you’ve used up your free entries and they’ll then give you a reduced rate. You may be asked to show ID with the card, since you’re not allowed to share one Artecard among several people, so be prepared with some form of photo ID just in case. The Artecard becomes activated upon first use, whether that’s at an attraction or on public transportation.
Note that having an Artecard doesn’t mean you can bypass a ticket line in most cases. You’ll still need to present your card at the ticket window, where they’ll give you a ticket for that attraction (either a free entry or a reduced entry, depending on your Artecard). And even if you don’t see a particular attraction listed in your Artecard booklet, it doesn’t hurt to ask at every ticket window in and around Naples whether they honor the Artecard – I found one popular church in the historic center of the city that’s not listed, but offers a discount to Artecard-holders. They mark your card with a rubber stamp instead of scanning the bar code, but it’s a discount either way.
If the Artecard you choose also gives you access to public transportation for free, you only need to insert the card into a validation machine once in order to get it into the system. After that, you just need to have the card with you in case a ticket checker asks to see it. The validation machines cleverly print both the start date and the end date of how long your pass is good for right on the ticket itself.

How Much the Campania Artecard Costs

I’ve said a few times in this article that there are several different Artecards, and each of them comes with a different pricetag. Here are a few of the options (check the official website for the rest):

Also note that there are cheaper cards for anyone aged 18-25 (so don’t forget your International Student ID!).

Is the Campania Artecard worth the cost?

It’s fairly easy to figure out whether you’ll save money with an Artecard rather than buying tickets regularly at the attractions you want to visit, and luckily the places that sell the Artecard have knowledgeable people on hand to help you figure out which card makes the most sense for your itinerary. If you want to do some estimating before you go to purchase the card, however, here are some things to know.
Because there are several options for Artecards, they don’t all offer the same discounts. There’s a link below to the official Artecard site so you can read all about the various cards and see which one seems right for you, but to give you an example of what the cards can save you budget-wise here’s one example Artecard experience.
The Tutta la Regione (all region) 3-day Artecard includes free access to the first two sites, a roughly 50% discount to all remaining sites, and free public transport in the region. The pass costs €27, and here are some samples of the cost difference between a full-price ticket (what you’d pay without an Artecard) to some of the included attractions and a reduced-price ticket using your Artecard.

As you can see, by visiting the most expensive sites on this itinerary first (Pompeii and Herculaneum), you save the most money because those two sites are free using this Artecard. The remainder of the sites visited during your three days of using this card are offered at a nice discount. This chart doesn’t even include the savings on transportation, either – which is especially great if you get a regional card that covers more than just the city of Naples, since the Artecard then includes the Circumvesuviana for getting to/from Pompeii (a €2.40 ticket one-way), Herculaneum (a €1.80 ticket one-way), and even Sorrento (a €3.40 ticket one-way).
You’ll obviously need to look up the admission fees of other attractions that aren’t included on the chart above if you want to get the most accurate picture of how much the Artecard could save you on your specific itinerary, but at least now you have an idea of what potential savings are available.

Where to Get a Campania Artecard

You can buy your Artecard at Naples’ Capodichino Airport, in any of the train stations in Naples, at the port of Molo Beverello in Naples and the port of Salerno, in many of the major hotels in the city, from some of the newsstands in Naples, and at the ticket windows of all the sites included on the Artecard. You can also purchase the card online via the official website or by phone (from outside Italy the number to call is +39 06 3996 7650).
Official Artecard website: https://www.artecard.it/