Italy Travel Tips for the Portland-Bologna Sister City Association Event (and for you, too!)

If you follow me on Twitter, it’s likely you know that the affection I feel for Italy is rivalled only by the affection I feel for the city in which I currently live – Portland, Oregon. What you may not know if you don’t live here (and even if you do) is that there’s a pretty vibrant community of Italians as well as Italian-Americans in Portland – and in fact, since 2003 Portland is a sister city with Bologna. When the Portland-Bologna Sister City Association asked me to speak at one of their monthly meetups, then, it was easy to respond with an enthusiastic yes.
Tomorrow night I’ll be talking about Italy travel tips at the May PBSCA meetup (they’re known as Know Bo! events) – it’s not just about Bologna, and it’s not just for PBSCA members. If you live in the Portland area and you’re interested in traveling to Italy (whether you’ve been before or not), I’d love to see you there.
If, however, you (like many of my readers) don’t live in the Portland area, here are some of the things I’m going to be talking about.
>> Want to come hear me talk about all this stuff live and in person – and even ask me some questions? Come to Caffe Umbria on May 10th at 6pm. Here’s more information about the Know Bo! event. 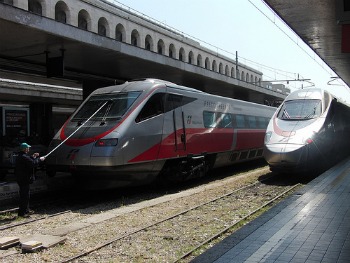 I’m a big fan of train travel in Italy. When I was first traveling in Italy, there was one big piece of popular travel wisdom that, to a certain extent, isn’t as wise as it once was: Buying train tickets as you go is cheaper than getting a Rail Pass.
This used to be quite true. And, depending on your itinerary, it can still be true. But for most Americans with our paltry two weeks to spend on vacation, we’d do well to take the fastest train possible to get between cities so we don’t spend our whole holiday in transit.
There were fast trains in Italy before, and there are even newer (and faster) trains on some of the busiest routes – and these quick trains come with a hefty pricetag. It only takes a few journeys on Italy’s high-speed trains to make the cost of an Italy Rail Pass well worth it.
If slow trains are the only ones on your itinerary, city-to-city tickets purchase as you travel through the country are probably still the cheaper option – but no matter what your itinerary looks like, you’d be smart to look up ticket prices online and compare the cost with that of a Rail Pass just to be absolutely sure.
>> Find out more about when to buy an Italy Rail Pass and when to buy Italy train tickets
It’s also important to note that although purchasing train tickets in advance on the Trenitalia site has long been a problem for anyone without an Italian credit card, WhyGo Italy now has a partnership that lets people book tickets online in advance – which usually means much cheaper prices – no matter what credit card you have. You can book tickets about two months in advance, and can get up to 30% off your tickets using the service.
Booking tickets in advance also means you don’t have to wait in line at the station, which is especially nice if you’re visiting during the high season. And if you’ve decided a Rail Pass is the way to go, you can buy reservations using this service, too, for any train trips that require them.
>> Find out more about booking Italy train tickets in advance online at a discount 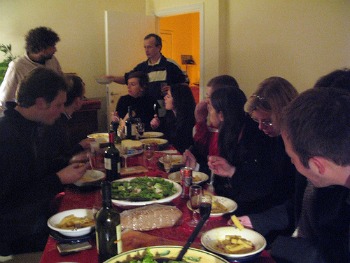 There are few things in Italy rhapsodized about more often than the food – and with good reason. Eating in Italy is a pleasure that goes well beyond plain old sustenance, and if you’re paying attention you can learn quite a bit about Italian culture by noting what’s on your plate in different parts of the country.
One of the things I always hear from Italian friends is that eating in nice restaurants in Italy is all well and good, but there’s nothing like eating a meal in someone’s home. Of course I believe them, but most people don’t have Italian friends inviting them in for supper. If you’re like the vast majority of people for whom the idea of dining in an Italian home is appealing, then, you’ll be pleased to know about Home Food.
The Home Food organization has a network of individually-approved home cooks who open their homes to visitors and prepare meals that include traditional dishes from that area. You’ll pay to attend a Home Food dinner, of course, but after paying a small monthly fee to join the organization (for whatever month or months you’ll be in Italy) it’s usually not more than €30-50 per person – and that usually includes several courses plus wine.
Home Food dinners can be small, with 2-4 guests in addition to the hosts, or large 20+ person affairs in the grand dining hall of an Italian palazzo – it varies widely, as does the regional cuisine throughout the country. Any foodie traveling in Italy would do well to check out Home Food, but even if you’re not a foodie these dinners can be incredibly fun cultural experiences – you get to see a real Italian home, for one, and meet the Italians who live there. Sometimes the guests are other Italians, too, so it’s a great opportunity to meet and mingle with the locals without having to worry about making the first move in a conversation. Oh, and if you don’t speak Italian, don’t worry – most Home Food hosts speak English.
Bonus note for the Portland-Bologna Sister City Association? Home Food started in Bologna in 2004. Maybe we should return the favor in Portland with a Home Food program of our own…
>> Find out more about going to a Home Food dinner in Italy 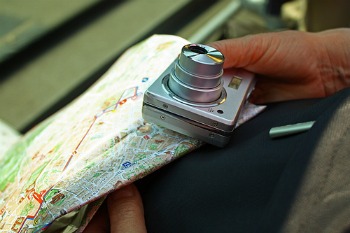 This remains, by far, the question I’m most often asked – by WhyGo Italy readers, by friends and family, by anyone who finds out I’m an Italy travel writer. Since I’m not an Italy travel consultant, however, I don’t create custom itineraries for people based on an email of the things they like to do or places they’d like to go. Instead, I send them a link to my article about how to plan an Italy trip.
The main problems people have when trying to figure out an Italy itinerary are: