Rome Cruise Terminal: Where It Is & How to Get There 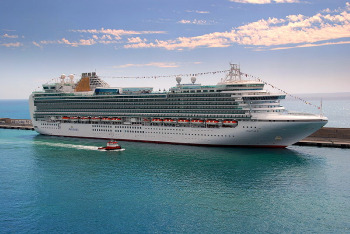 Rome is one of the popular ports of call on many cruises in the Mediterranean. But a quick glance at a map of Italy is enough to see that Rome itself isn’t on the water. So where, exactly is the cruise port in Rome? Do they sail giant cruise ships right up the Tiber River?
(Hint: the answer is no.)
The Rome cruise port is actually in the city of Civitavecchia (pronounced chee|vee|tah|VEHK|kyah), which is on the coast. And whether Rome is a port of call on your cruise or it’s the start/end point of your cruise, you’re going to need to know how to get from the Rome cruise terminal into Rome itself – because although Civitavecchia is, I’m sure, a perfectly nice place, you really don’t want to spend time there when you can be in Rome.
Here, then, is what you need to know about the Rome cruise port – including where it is and how to get there and back.

More useful links for visiting Rome on a cruise:

Location of the Rome Cruise Terminal/Port of Rome

First things first, let’s get acquainted with where Civitavecchia is in relation to a couple other places where you’re likely to go during your trip to Italy. Here’s a map of the region: 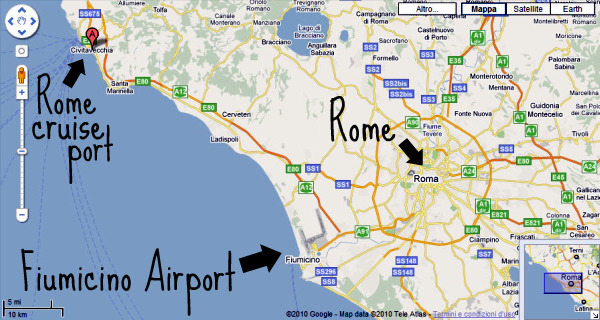 As you’ll notice, the so-called “Rome Cruise Terminal” is quite a distance from the city itself. The Fiumicino Airport, which people already complain is too far from the city center, is closer to Rome than Civitavecchia. But because so many visitors come to Rome via cruises, the two destinations are well-connected. 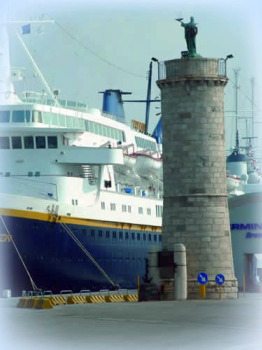 Now that we’ve got our bearings, let’s look at the various transportation methods you have available for getting back and forth from Rome to Civitavecchia and the Rome cruise port.
>> And if you’re looking for things to do in Rome on a shore excursion, here’s a list of my suggestions for the top 10 things to do in Rome.
Rome – Rome Cruise Terminal by Train
There are two trains every hour that run between Civitavecchia and central Rome, and you don’t even have to go to Rome’s main Termini Station to catch them. All of Rome’s train stations – Termini, Ostiense, Tiburtina, Tuscolana, Trastevere, and San Pietro – connect with Civitavecchia. The trip takes can take up to 1 hour and 20 minutes one-way, so if you’re in more of a hurry look for trains that are closer to the hour-long journey mark.
Getting to and from one of Rome’s train stations is easy enough using Rome’s city transportation, but to connect the Civitavecchia train station with the actual cruise port you’ll need to use one of the port’s shuttle buses. The shuttles run from the entrance to the port itself to a stop about four blocks from the Civitavecchia train station at the Michelangelo Fortress. You can see the fortress (marked “Forte Michelangelo”) on this map of Civitavecchia, and the station (marked “Stazione”), and this satellite picture map shows the route you would walk from one to the other.
Ticket prices for a train trip between Civitavecchia and Roma Termini station are really inexpensive – even first class tickets are in the €11-17 range, while second class tickets can be as little as €4.50 one-way. The more expensive trains are, as is generally the case, the faster ones.
This quick video shows you, step by step, how to get from the cruise terminal at Civitavecchia to the train station so you can get into Rome easily.

Rome – Rome Cruise Terminal by Bus
There are buses that have regular service between Rome and the port entrance at Civitavecchia. There are two bus companies that operate on the Rome-Civitavecchia route – CO.TRA.L., which runs what are called “extra urban” buses (meaning they’re not just limited to one city center), and a more localized service.
The CO.TRA.L. company’s route includes several Civitavecchia stops, but the one you want is at the Piazza Vittorio Emanuele. It’s not far from the Forte Michelangelo, near the southern entrance to the port itself (it’s closer to the port than the train station). This is the terminus for the bus that then proceeds to Rome, and on this PDF of the CO.TRA.L. schedule (which you can use to find departure times) it’s listed as “CIVITAVECCHIA Dep. COTRAL.”
The bus stop in Rome is called Roma Cornelia, which is right on a Metro stop for line A (which is a good thing, because the stop itself isn’t very close to central Rome). The Cornelia stop is actually only four stops from the Vatican Metro stop, so if you’re planning a trip to see St. Peter’s you may be able to do that first.
The trip between Civitavecchia and Rome by CO.TRA.L. bus is about 1 hour and 45 minutes, and a one-way ticket (which is priced based on the distance you’re covering) is in the €3-4 range.
As mentioned, there are more localized city buses you can take to get from Civitavecchia into Rome – or Rome into Civitavecchia – but it’s going to be much slower and a little more complicated to figure out. If you’re working on a novel about writing buses in Italy, however, it may be ideal. You’ll find the bus timetable for six different bus lines to choose from on this page.
Rome – Rome Cruise Terminal by Private Shuttle or Taxi
You can hire a private shuttle van or a taxi to get back and forth between the Rome cruise port in Civitavecchia and central Rome, but it’s an expensive proposition. Private vans can be €450-500 or more, and even if you pack it with people it’s still more expensive than if you took a train. Not only that, traffic in and out of Rome is often quite bad, which can make what should be a one-hour one-way trip much longer (thereby robbing you of time in Rome). If you’d still like to hire a private shuttle I’d recommend talking to the cruise director on your ship. 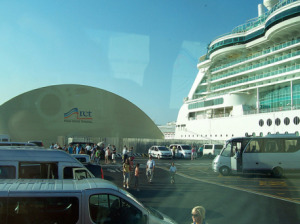 If Rome isn’t just a port of call on your cruise but is actually the starting or ending point, then it’s not the city of Rome you’re likely to be heading for but the airport instead. The nearest airport to the cruise port is Fiumicino (officially called Leonardo da Vinci Airport), which is 60 miles from Civitavecchia (see the map at the top of this article).
Here’s what you need to know in order to get from Fiumicino Airport to the Civitavecchia cruise port, or to get from the Civitavecchia cruise port to Fiumicino Airport.
Fiumicino Airport – Rome Cruise Terminal by Train
There aren’t direct trains connecting Fiumicino Airport to Rome’s cruise terminal in Civitavecchia, but to make the trip by train only requires one transfer. From Fiumicino you’ll take a metro train to Rome’s Ostiense station (a journey of roughly 15-20 minutes), and then a train from Ostiense station to Civitavecchia’s train station (a journey of roughly 50-60 minutes, plus time spent at Ostiense between trains).
The Fiumicino-Ostiense train is on Rome’s FM1 metro line, and a ticket costs €8 one-way, and the regular Ostiense-Civitavecchia Trenitalia train costs €4-6 one-way (depending on whether you buy a second class or first class ticket).
Fiumicino Airport – Rome Cruise Terminal by Car
I’m not one to recommend driving in Italy when there’s a suitable transportation alternative, but for those of you who want to make the trip from the Rome cruise terminal in Civitavecchia to Fiumicino Airport (or vice versa) by car, that’s an option, too. With no traffic issues, it should be a 45-60 minute trip one-way – but there’s no accounting for traffic in and around Rome.
The Rome cruise terminal’s own website links to a Google map referencing how to get between Fiumicino and the cruise port, but for more detailed driving directions in Europe I prefer the Via Michelin site. You’ll need to plug in more complete addresses for your starting and ending points to correspond with exactly where you’re going, but just by putting in the general “Civitavecchia” on one end and “Fiumicino” on the other I’m told that the Michelin-recommended route is 66km, will take (with no traffic) 47 minutes, and cost about €3 in highway tolls.
Fiumicino Airport – Rome Cruise Terminal by Private Shuttle or Taxi
There are companies that operate private shuttles and taxis back and forth between the Civitavecchia port and the Fiumicino Airport, but as you can imagine it’s not a cheap trip.
With one company, a taxi for up to four people with a total of two big suitcases or four small suitcases is €115. With another, a mini-van is €105 for two people ($52.50 each). With another, up to two passengers can go for €90, with additional passengers (up to 8 total) €15 each. You’ll need to look at your options to see which makes the most sense to you.
There are also taxis that line up outside the cruise port and at the airport, but some cruise passengers report long waits for taxis at the cruise port when ships are arriving because the Civitavecchia taxi supply can’t keep up. You’re not as likely to find the same problem at Fiumicino Airport’s taxi queue.

Homeport Cruise Ships at the Rome Cruise Terminal/Port of Rome