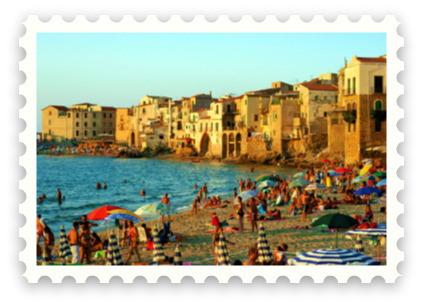 If there’s one thing you can count on, it’s that no matter how many times travel professionals will tell people to visit Italy in the off-season, the vast majority of tourists will still go in the summer.
This is partly because the idea of a “summer vacation” is ingrained in our psyche, and partly because that’s when the kids are out of school – so it’s the biggest block of time when everyone can plan to take a trip.
In general, I’d say that if you can avoid taking your Italy vacation during the summer, you should. Yes, you’ll miss some summer-only events, but you’ll also miss out on the highest concentration of other travelers – not to mention the higher prices.
Still, a summer visit to Italy doesn’t have to break the bank or drive you crazy. Just remember that there’s a part of each summer in Italy when even the Italians would rather be someplace else.

Although spring in Italy used to be reliably mild weather-wise, temperatures have soared in recent years starting in mid-to-late May, so even the month of June can no longer be counted on for nice weather that’s not too hot. Once you get into July and – gasp – August, of course, all bets are off.
June’s Big Holiday, Parades, & Concerts
In June, summer starts with a bang in the form of a national Italian holiday – Festa della Repubblica, or the Festival of the Republic, on June 2nd. It’s celebrated all over the country, but the place to be is Rome, where there’s a huge military parade through the city center and a fly-over of military jets trailing the Italian flag’s colors behind them. In other cities there are sometimes free concerts in public squares, so ask at the tourism office or your hotel’s front desk to find out what’s going on. Some things will be closed for this holiday, so be sure to check for that on museum websites before you plan out your itineraries.
Heat Rising in July
By July, the mercury is rising even more and yet the crowds just seem to be growing. (The photos you’ve seen and horror stories you’ve heard about people waiting in 8-hour lines to get into the Vatican Museums? Those are from summer trips.) The first of the famous Palio races in Siena is in July (the second is in August), and later on in the month you’ll start seeing “closed” signs going up in storefronts as places begin to shutter for the August holiday.
August is Holiday Month for Italians
August is the month when Italians (and other Europeans, for that matter) go on holiday if they can – they get out of the stifling cities and head for the coasts and mountains. In other words, in Italy’s most popular cities you’ll find an even higher concentration of outsiders and fewer residents – and on Italy’s beaches you’ll be hard-pressed to find an available beach chair!
For residents who can’t get out of town for August, some cities do have special events planned – in Milan, for instance, a small-town atmosphere was created in the Parco Sempione in 2009 with vendors selling carnival-style treats and a big tent with a band and dancing. It’s fun to get into the act, even if you’re only in town for a few days, so ask at the tourism office to find out what special things are on the calendar in August.
It’s important to note that August 15th is another national holiday – this one is Ferragosto, and it’s one of the country’s most important holidays. Be on the lookout for fireworks.
Things to Know about Summer Travel in Italy
Italy in the summer doesn’t sound so bad now, does it? Well, if you were reading this in a million percent humidity and no air conditioning, you might think differently. Again, if you can plan your Italy trip for the spring or fall – or even winter – I’d suggest that’s a better alternative to a summer trip. Take the kids out of school for a couple weeks, I promise they’ll learn something in Italy. Of course, if you absolutely can’t manage anything but a vacation in Italy in the summer, then remember these things:

And if you want to hit the beach like the Italians themselves to get away from the heat of the city, here are another couple things to remember:

Here are some more summer travel tips for Italy so you stay cool in the heat!
For More Information About Travel in Italy in Summer

photo by Simon Welsh, modified in Picnik by me