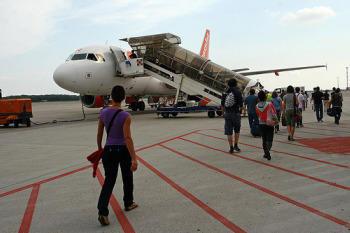 One of the biggest expenses of any trip is the cost of an airline ticket – and, unfortunately, for many people visiting Italy from outside Europe, the cost is higher than you’d think it should be. You may have seen great bargain fares listed for flights to major European cities like Paris, London, or Amsterdam and assumed that flights to Rome or Milan would be similarly priced – but they’re usually not. For whatever reason (and there are many theories), flights to Italy from outside Europe almost always cost more than flights to other European cities.

But that doesn’t mean you have to give up on your Italy trip. I mean, France and England are perfectly nice and all, but you won’t find Venice or the Roman Colosseum or The Last Supper anywhere else but Italy. You’ll just need to do a little more legwork to find the best prices on airfare to Italy.

And that’s where WhyGo Italy comes in.

There are many articles on WhyGo Italy that offer tips to finding cheap airfare to Italy, but unless you’ve been following along from the very beginning you may have missed some of them. So I’m going to keep this page updated with links to all the articles on the site that are designed to help you save money on your Italy airfare. You’ll also find some general tips for getting cheap airfare to Italy at the bottom of this article, underneath the links.

Before I get to the overall tips, let me also point out a few other articles you might find useful if you’re in the planning stages of a trip to Italy (which I’m assuming you are, since you’re looking at a page about airfare to Italy!).

To get the best tips for finding cheap flights to Italy, your best bet is probably to look at the individual articles linked above for the specific city or cities you’re thinking of flying into. But these general tips will definitely help when you’re just starting to look at airline tickets to Italy, and they can also help you save money almost anywhere you go in the world.

High prices clearly don’t keep people from visiting Italy, because as the strength of the euro increases the pace of tourists has hardly slowed – but that doesn’t mean you need to be one of the people paying a fortune for your vacation in Italy. Besides, every couple of euros you save means another scoop of gelato.

If you do your homework, use the tips listed above, read through the articles linked at the top of this article, and use the search engine at the top of this page, you stand a much better chance of coming up with a good deal on airfare to Italy. And if you think there’s a critical piece of information missing here, please let me know!