Things You Should Know About the Cinque Terre 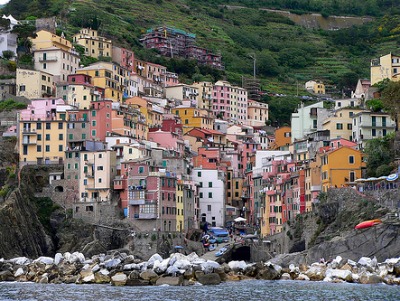 Once upon a time, the Cinque Terre actually was a collection of “sleepy fishing villages” – unlike today, when that phrase is still used to describe what has become one of Italy’s most popular tourist destinations.
Thanks to a combination of spectacular views, great weather, and Rick Steves, the Cinque Terre is no longer “off the beaten path.” In fact, although it remains a little more difficult to reach than Italy’s big cities and hasn’t been overrun by mega-hotels, the Cinque Terre is well-equipped to handle the huge influx of travelers who make their way to the Ligurian coast each year.
Despite the popularity of the Cinque Terre, there are still misconceptions about the region that it’s important to clear up before you visit. You would find out some of these things upon arrival, but learning about them beforehand will help make sure the trip you plan is the best it can be.
With that in mind, here are some things you should know about the Cinque Terre. 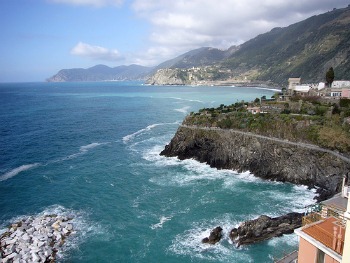 The word “cinque” means five in Italian, and “terra” in the singular is land or earth. “Terre” is just the plural form of “terra.” So “Cinque Terre” is “five lands,” referring to the five towns that make up this area collectively. You’ll often see it misspelled as Cinque Terra, but that’s like saying “five land.” It just doesn’t work.
And here’s your quick Italian pronunciation lesson. In Italian, a C followed by either an I or an E has a “ch” sound, not an “s” sound. “Cinque,” therefore, is pronounced CHEEN|kweh. “Terre” is easy, since the E sounds the same both before and after the Rs – it’s TEHR|reh. Oh, and roll those Rs if you can.

There are only five towns in the Cinque Terre proper. 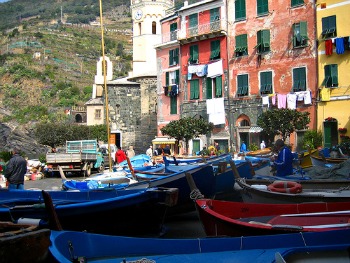 Every town in the Cinque Terre has a train station. 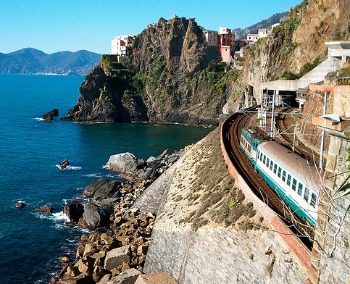 For an area as vertical and cliff-tastic as the Cinque Terre, it’s astonishingly accessible. Yes, I said in the introduction that it’s “a little more difficult to reach” – and it is. But that has more to do with time than with transportation methods.
There are train stations in every one of the Cinque Terre towns, and in many of the nearby towns as well. The trains that run between the Cinque Terre towns are slow – they putter from station to station, stopping at each one – but there are faster trains that connect with the towns at either end of the five and speed through the others.
The point here is that while some destinations on the former “off the beaten path” list in Italy remain more challenging to reach in that you’ll need to rent a car or negotiate local bus schedules, the Cinque Terre is blissfully easy to reach via the good old trains we all know and love in Italy.
>> Here’s more information about getting around in the Cinque Terre once you’re there.

You should avoid driving in the Cinque Terre. 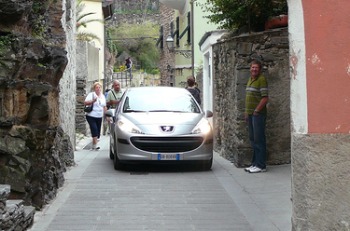 Now that I’ve talked about how wonderfully accessible the Cinque Terre is by train, this section may not be necessary… But because some of you will undoubtedly look at the twisted road that snakes along the coast connecting all five towns with lust, I’ll mention it just in case.
There’s a similarly winding road along the Amalfi Coast that’s well-loved by drivers, despite its reputation for being too crowded during the summer with buses and scooters – and though I wouldn’t personally want to drive that coast, either, it doesn’t present the same problems for drivers as the coast along the Cinque Terre.
Driving into the region may be fun, but there are no cars allowed in the tiny town centers of the Cinque Terre and the towns’ sole parking lots are often high above the town centers (not to mention expensive). If you are traveling around Italy with a rental car and the Cinque Terre is on your list, then I highly recommend you park the car wherever your homebase will be and plan on getting from town to town during your stay using the trains, the boats, or your own two feet.

The Cinque Terre trails between villages are a national park. 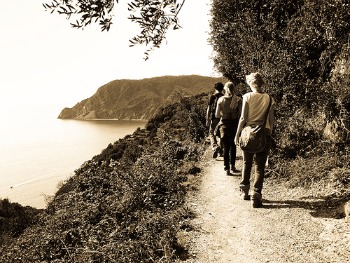 Hiking in the Cinque Terre is one of the biggest draws to the region itself, and it has been for many years. More recently, however, the trails that link the five towns have become a national park. The trails themselves haven’t changed much (although some argue they’re better maintained now), so the biggest changes since the introduction of the national park is that there are now open/closed hours for the trail and it’s no longer free to do the hike.
There are passes you can buy for 1-7 days that allow for access to the trails as well as train trips and boat trips between the towns (depending on the pass you buy). They’re a good bargain, especially if you plan to do the whole hike between the five towns and take the train around a bit on top of that.
>> Learn more about hiking in the Cinque Terre.

The local wine grown in the Cinque Terre is white (& often sweet). 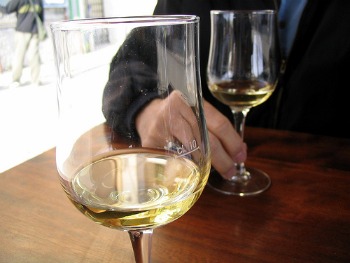 Even if you’re not a foodie traveler you might still want to enjoy the local specialties no matter where you go in Italy. And in many cases, that means ordering the house red wine to go with your meal. Unlike in some parts of the world, getting a carafe of the inexpensive house wine isn’t a mistake – in Italy, the house wine is typically great.
But in the Cinque Terre, the local wine isn’t red.
There are vineyards planted in neat rows up and down the hills of the Cinque Terre, and if you hike between the towns you might even see the nifty trolly/train contraptions the locals use to harvest the grapes – but those grapes produce white wines, not red.
By all means, order a local wine with your meal in the Cinque Terre – but don’t expect it to be red. The local whites go well with the region’s seafood, and there’s a delightful sweet dessert white wine called Sciacchetrà that goes brilliantly with biscotti.

Anchovies are a common menu item in the Cinque Terre. 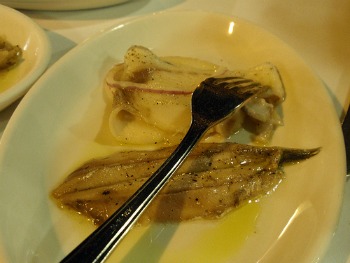 Tourism is the #1 industry in the Cinque Terre these days, but there’s still plenty of fishing going on off the coast – and much of what the local fisherman catch ends up on dinner plates throughout the region every day.
Perhaps the biggest seafood surprise for visitors to the Cinque Terre is how often they see acciughe on menus. Acciughe are anchovies, and you’d be forgiven if your knee-jerk reaction to anchovies was an unpleasant one. Many of us are used to anchovies being canned, salty, and oily. In the Cinque Terre, however, they’re eaten fresh.
You’ll find acciughe incorporated into pasta sauces, but I encourage you to try them served simply on a plate – heads and all – with olive oil and lemon. You can eat the whole thing, and there’s nothing overly oily or salty about them.

The Cinque Terre is cat heaven. 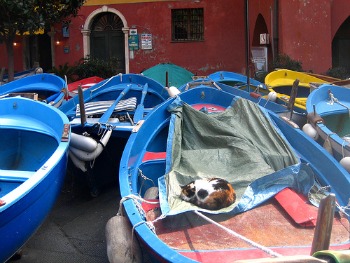 Many cities around the world seem to be dominated by a certain kind of pet – usually either cats or dogs – and it’s often only one. In Paris, tiny dogs abound. In the Cinque Terre, it’s all about the cat.
Each town center has a collection of semi-stray cats lounging around by the seafront (when it’s sunny, anyway), and every seafood shop has a cat or two that hangs around outside as the fishmonger is cleaning the day’s catch.
Not only that, there are a couple points along the trail connecting the five towns of the Cinque Terre that are sort of meeting points for some of the strays – local cat lovers leave dry cat food in covered bins with signs asking passers by to refill dishes if they find them empty, and there are usually a few cats hovering around. I’ve never run into any cats in the Cinque Terre that were unfriendly, but you’d be wise to wash your hands after petting any of them.

Not all villages in the Cinque Terre are right on the water. 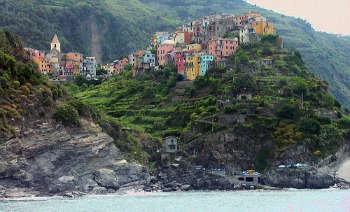 Four of the five Cinque Terre towns tumble down the cliffs right into the water, with local fishing boats anchored a few feet from the rocks that make up the base of each town. But one of the towns is nowhere near the water.
Corniglia, the middle town of the five, sits high above the water on top of the cliff. The town’s train station is further down the hill, which means anyone arriving by train has a bit of an uphill hike ahead of them – as does anyone doing the hike between the villages. From Manarola or the train station, it’s a set of switchback stairs, whereas from Vernazza it’s a gradual uphill climb. 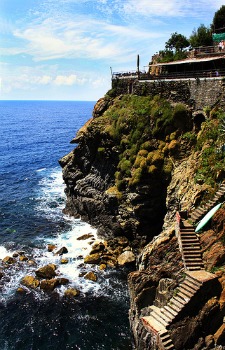 The Cinque Terre is along the coast, and the sea is lovely, and there are beaches… But if you’re a serious beach lover and that’s why you want to visit the Cinque Terre, you might want to think again.
Of the five Cinque Terre towns, only Monterosso al Mare has one that you might recognize as an Italian seaside beach. It’s the largest beach in the area, right off the town center, and often crowded with beach chairs and umbrellas in the summer.
There’s another popular beach down a staircase from the Cinque Terre trail between Manarola and Corniglia, but the beaches in the rest of the towns aren’t much to speak of. In fact, in Manarola and Riomaggiore the sea comes right up to the town’s rocky base, leaving no room for a beach at all. In those towns, people sunbathe on top of the rocks and jump into the water to cool off.
Having said all of that, one of Italy’s nude beaches is in the Cinque Terre, however… Fair warning!
photos, top to bottom, by: Lee Coursey, ezioman, antmoose, Goldmund100, Jess & Peter, trixnbooze, Lee Coursey, Fermented Thoughts, antmoose, chuntera, Aida Photography