Venice Cruise Terminal: Where It Is & How to Get There

Many people in the United States automatically think of islands in the Caribbean when they hear the word “cruise” – but Mediterranean cruises are incredibly popular. Depending on the cruise you pick, you can visit cities in Greece, Spain, France, and Italy in one trip – and without constantly packing/unpacking or moving from hotel to hotel.
When it comes to Italy, one of the most common stops on an Italy cruise is Venice – which makes sense, as it’s a city on water. But as small as Venice is, and as impossible as it is to miss the thousands of cruise passengers who flood into Venice each day, it’s actually quite easy to wander around the city for days without ever finding where all those enormous cruise ships dock. If you don’t drive or take the bus into Venice, you probably wouldn’t have any reason to swing by the sole parking lot in the city. Which means you’d go through your whole visit without seeing the gigantic floating cities at Venice’s cruise port.
If you’re taking an Italy cruise, however, then here’s everything you’ll need to know about the Venice cruise terminal. 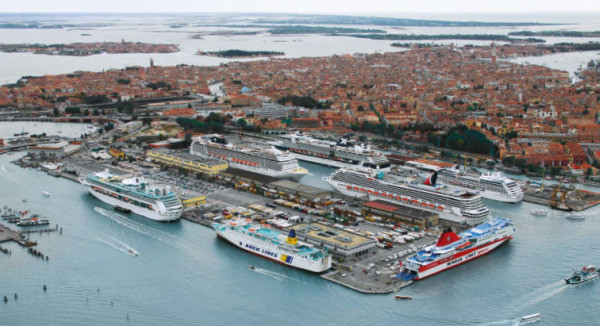 More useful links for visiting Venice on a cruise:

Location of the Venice Cruise Terminal/Port of Venice

As mentioned, the cruise terminal in Venice is near the city’s only parking lot, which is Piazzale Roma. Piazzale Roma is just across the Grand Canal from the Venezia Santa Lucia train station – but it’s the opposite direction most people go. This map shows the location of the bridge from the mainland, the train station, the parking lot, and the two main cruise terminals. 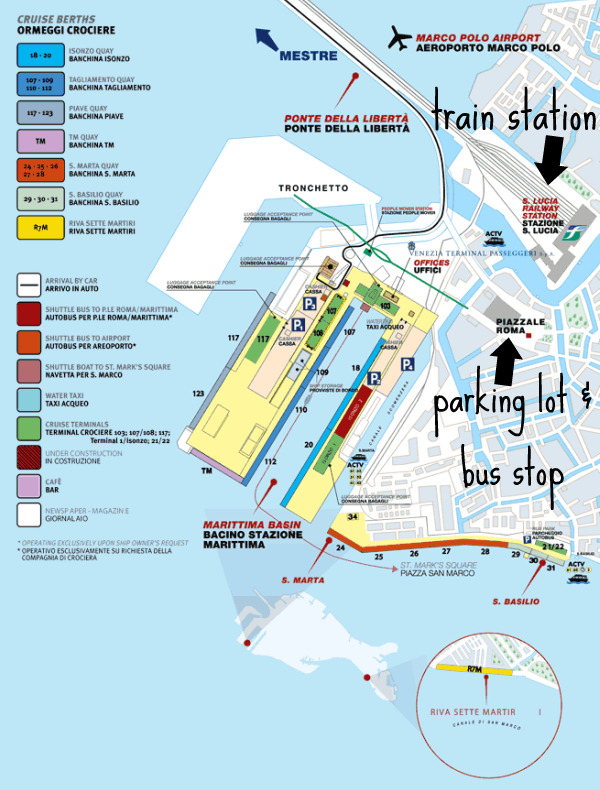 The primary cruise terminal, as you’ll see by its prominence, is called “Marittima.” It’s the color-coded area to the west of the Piazzale Roma parking lot. A smaller cruise terminal called “San Basilio” is located south of the parking lot. There are other places for docking in this area, and another one in the southeastern part of the city past St. Mark’s Square, but those are used for hydrofoils and ferries making regularly scheduled runs to places like Greece or Croatia, rather than big cruise ships on multi-stop tours.

How to Get to the Venice Cruise Terminal/Port of Venice

Now that you know where the Venice cruise terminal is, let’s talk about the best way to get there. Your options will vary depending on where you’re coming from, so I’ll try to outline the most common places you might be arriving from on your way to a Venice cruise.
Arriving at the Venice Cruise Port from Venice Marco Polo Airport
Note: These instructions will get you from the Venice Marco Polo Airport on the mainland to the islands of Venice, but may not get you all the way to the cruise terminal. For instructions on reaching the cruise terminal from the train station or the bus stop, scroll down to those sections below.

>> Here’s more information about how to get into Venice from the Venice Airport.
Arriving at the Venice Cruise Port from the Piazzale Roma Parking Lot/Bus Stop
On the map above showing the cruise terminal area, you’ll see that the Piazzale Roma – where the buses stop and where people park their cars – is not far from the Marittima cruise terminal. If your ship is docked in the Marittima terminal and you don’t mind walking, it takes 10-15 minutes to walk. Otherwise, most of the cruise lines run regularly scheduled free shuttles back and forth from Piazzale Roma to the cruise terminal on certain days of the week. By either the free shuttle or a privately hired taxi the trip is very short, usually only 5 minutes or less.
If your cruise is setting off from San Basilio terminal, on the other hand, a walk – while totally possible – is significantly further. San Basilio is reachable via private water taxi from the Piazzale Roma parking lot, or if you’re more adventurous and have more time, you can take a vaporetto around the islands to the Zattere stop and walk to the cruise terminal from there.
Arriving at the Venice Cruise Port from the Santa Lucia Train Station
The cheapest option for getting to the Venice cruise terminal from the main Venice train station is to walk across the brand new and ultra-modern Grand Canal bridge – the “Constitution Bridge” – that leads to the Piazzale Roma parking lot, and then follow the instructions above. It’s a short walk, and the bridge’s steps are graduated so slightly that you could probably even more or less roll a suitcase over it (although it’d be easier to pick a bag up and carry it).
Another option is to take a private water taxi from right in front of the train station directly to the cruise terminal. If money isn’t a concern, this is an easier transport method to stomach – but if you’re traveling in a group (or meet a group of fellow cruise-goers on the train) and can share the water taxi fare among 4-6 people, it’s a pretty reasonable price to pay for the convenience and comfort.
You can also catch one of the vaporetti that dock right in front of the train station, just make sure you’re getting on one that will drop you off at Piazzale Roma. From there, you’ll follow the instructions above.
Arriving at the Venice Cruise Port from the Mestre Train Station
If you’re coming to your Venice cruise from elsewhere in Italy, you might be confused into thinking that the Venezia Mestre station is the train station you want for your cruise. It’s not. The Mestre station is on the mainland – the last stop on the mainland before trains snake across the long bridge to the islands of Venice – and since the cruise terminal is on the islands, Mestre isn’t where you want to be.
Here’s hoping you’re reading this in time to book the right train tickets – in which case you want to book tickets through to Venezia Santa Lucia station (the station on the islands), and then follow the instructions above for getting to the cruise terminal from the Santa Lucia train station. If you’ve already got your tickets booked and you don’t feel like booking a separate ticket from Mestre to Santa Lucia, there are buses that connect Mestre’s station to the Piazzale Roma parking lot/bus stop on the islands. It’s about a 15-minute trip and only costs a few euro. The directions for getting to the cruise terminal from Piazzale Roma are listed above.

How to Get to St. Mark’s Square from the Venice Cruise Terminal/Port of Venice

Now, let’s just say you’ve checked in as early as you can to your cruise ship, and you want to explore Venice a little bit before you set sail. Or let’s say you’ve docked in Venice as a port of call, and you want to get straight to the most popular place in the entire city because you’ve got limited time to enjoy it. I shall begin by telling you that you’re missing out on the best of Venice by not spending the night, and that you’d do well to treat this brief visit as a “sampler plate” and return for the full five-course menu on a later trip. And now I’ll tell you how to get to St. Mark’s Square from the Venice cruise port.
On the map below, I’ve marked where the cruise port is on the left, where St. Mark’s Square and St. Mark’s Basilica are on the right, and I’ve also put a red marker where the Rialto Bridge is and a green marker where the Santa Lucia train station is for reference. The little blue markers you see lining the islands are vaporetto stops. 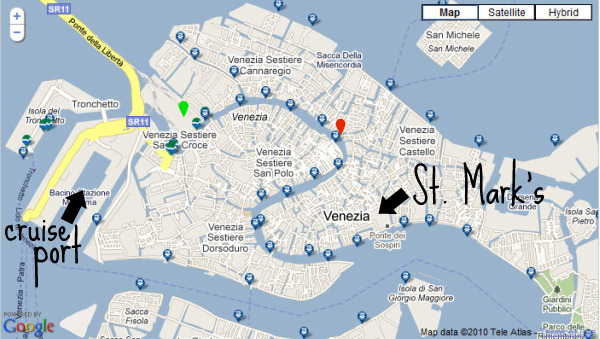 The S. Marta stop is the one closest to the cruise terminal, and vaporetto line 41 runs from S. Marta to the S. Marco-S. Zaccaria stop (with only a few stops along the Giudecca island) daily. The trip is roughly 20 minutes. It won’t take you along the famous Grand Canal, but you can always make a beeline for St. Mark’s Square and then work your way back toward the cruise ship along the Grand Canal in a combination of walking and taking the vaporetti.
>> Here’s more information about riding the water buses in Venice, including how much tickets cost and where to buy them.
>> And for other ideas of what to do with limited time in the canal city, here’s my list of the top 10 things to do in Venice.

Homeport Cruise Ships at the Venice Cruise Terminal/Port of Venice

>> You can also consult the official Venice cruise port website for a list of the homeport ships.
This video shows what it’s like to arrive at the Venice cruise port by cruise ship. It’s an early morning, but the views are worth it.

>> More information about Venice’s cruise terminal is available at the Port of Venice website – in Italian and English – and cruise passengers may be interested in this detailed PDF guide to the Venice cruise port.