Venice Transportation 101: How to Get Around in Venice 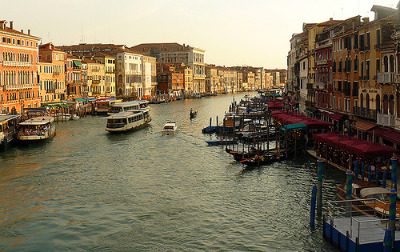 Venice is an ideal city to walk in, but even the most dedicated walkers will probably want to use public transportation in Venice at some point – it’s on the water, after all, and the novelty alone is worth one trip on one of Venice’s famous boats.
The good news is that Venice’s public transportation system is really easy to use – there are very few lines to keep track of in Venice proper, and only a couple areas where you won’t be walking anyway. The bad news is that tickets seem more expensive than they should for what you’re getting, so it’s important to know all your transport options in order to get the most for your money.
Here’s what you need to know to use public transportation in Venice.
>> To get around in Venice, first you’ve got to get there – here’s how to get from the Venice Airport into Venice.

How to Use Public Transportation in Venice

Different Kinds of Boats in Venice

You’ve probably heard the terms vaporetto, gondola, and traghetto – but do you know what they are? Aside from all being floating thingies (yes, that’s a technical term) and all being in Venice, they’re pretty different. Here’s a breakdown of what each one is.

>> And if you’re the adventurous type, you might be interested in kayaking in Venice – yes, you can do that!
On this photo of the Grand Canal, you can see all three – and a few other boats, too. 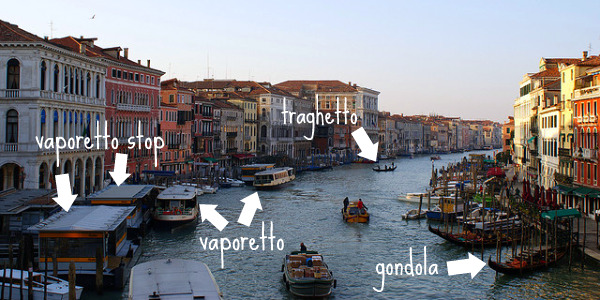 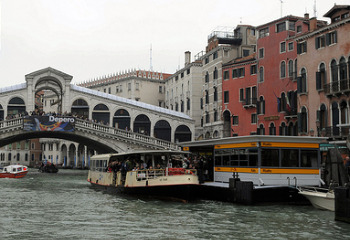 As mentioned above, most people are content to walk around Venice for their entire stay in the canal city. You really can walk everywhere, and in many ways the leisurely stroll from one place to another is part of the attraction of Venice. But taking a boat ride down the Grand Canal – especially at night, if you get a spot with a view – can be a lovely way to spend the better part of an hour. And if you plan on visiting other islands in the lagoon, you’re likely to ride a vaporetto or two in Venice.
Vaporetto Maps
While I’m generally an advocate for pretending you don’t even have a map so you can get good and thoroughly lost in Venice, if you’re going to ride the vaporetti you may want to glance at a map now and then. Most Venice maps include the vaporetto lines, but some only run during the high tourist season and some are for residents only.
Since the vaporetti essentially only run along the Grand Canal and between islands in the Venetian lagoon, you don’t really have to worry about negotiating your way through a complicated network of lines. If you’re on the Grand Canal, it may be easiest to go up to the vaporetto stop you’re closest to and check the list of other stops that particular line serves. And if you’re planning a trip to one of the other islands, you’ll need to find the stop from which the vaporetto you want departs.
>> You can download a ZIP file with a vaporetto map from the website of the company that runs the vaporetti, and my friend Nan of Living Venice also has a very cool vaporetto guide available on her site for $1.75 – it includes easy-to-read maps (in two paper formats and three print sizes) as well as a brief guide for how to use the vaporetto.
Vaporetto Tickets
A single ticket buys you 75 minutes of travel time on the vaporetto for €7 – so if you’re just looking for a quick trip and won’t make another one within that hour, that’s a high price to pay. At that point, I’d suggest you either get a pass that covers you for your whole visit, take a traghetto (if possible), or just walk. [Price and 75-minute validity effective June 1, 2012.]
>> Learn more about the Venice discount cards and passes that might work for your trip – most include both transportation and a few attractions in Venice.
Once you’ve bought your ticket, don’t forget to validate it in the machines available at each vaporetto station just before you walk the plank toward the canal and the vaporetto.
Main Vaporetto Tourist Line
The main tourist vaporetto line, the one that’s recommended if you want a leisurely “cruise” down the Grand Canal that serves as a sort of guide-less tour of the water city’s “main street,” is the #1 vaporetto.
The #1 vaporetto line runs the length of the Grand Canal and stops at every point between the train station and Piazza San Marco. It takes between 45 minutes and an hour to get between those two points, so if you’re in a rush it’s not the vaporetto to take. If you’re looking for a leisurely way to see the sights and the weather is agreeable, however, it’s a great way to spend an hour.
Grab a gelato, your camera, and a list of the sights along the Grand Canal, and squeeze your way into a spot where you can watch the city float by and where you won’t be in the way of the people who have to rope the boats up at every stop. Moving every few minutes to let them pass distracts you from your sightseeing.
How do I get from the Venice train station to Piazza San Marco?
If you arrive in Venice by train, the first thing to be aware of is that there are two stations bearing the name “Venice” – one called “Venice Mestre” is still on the mainland, so don’t get off there. You want “Venice Santa Lucia.” And thankfully the train station spits you out right onto the Grand Canal, and there’s a big vaporetto stop right in front of you. You can’t miss it. Seriously.
The #1 vaporetto is the tourist line and stops at every single stop along the Grand Canal – including San Marco at the other end. It takes awhile, but if you’re sightseeing that’s fine. The #2 vaporetto is faster, stopping at only a few points between the train station and San Marco, but it’s only a seasonal line, so if you’re visiting out of the high season you may not see any evidence that a #2 line even exists. 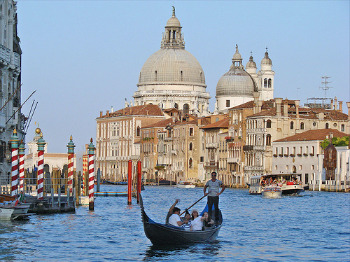 For some people, riding a gondola in Venice is the kind of thing that will make a trip to the canal city complete. You’ve seen pictures of Venice gondolas for so long that you’ve got to ride in one, right?
You’re not alone.
Despite the romantic connotations associated with a gondola ride in Venice, there are some things you need to know before you get in the boat. First of all, learn what the current official gondola fares are (yes, there are official fares) so you know when someone’s trying to rip you off. Second, read about other peoples’ experiences on gondolas – taking a gondola ride at one time of day or in one part of the city can be a very different experience (and very not-romantic) than at other times or from other places.
>> Read more about gondola rides in Venice before you go. 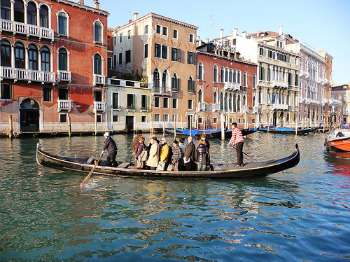 Looking at a map of Venice, you’ll notice that the Grand Canal only has a few bridges crossing it. So what happens if you find yourself midway between two of those bridges and you really don’t want to wind your way to a bridge in order to get across the water? If you’re lucky, you’ve got a traghetto stand nearby.
At first glance, you might think a traghetto was just an undecorated gondola – and to some extent, it is. It’s the same basic boat structure, but instead of ornate carving on the outside and only one or two areas of fancy seating, a traghetto is simpler in design and has a series of bench-like seats along the body of the boat (like a canoe might). Another big difference between a gondola and a traghetto is something you won’t notice until you’re on one and floating across the canal – they’re typically piloted by two gondoliers, not one.
Taking a traghetto from one side of the Grand Canal to the other is something Venetians do every day, and most of the people you’ll see in traghetti aren’t tourists. It’s a very short trip, so there’s no romantic gondola-esque feel here, but at €1-2 per crossing it’s also a bargain.
You won’t need a ticket to ride a traghetto – you simply walk up, give the necessary coins to the gondolier (or sometimes even just leave them in a pile with other coins at the end of the boat where you’re boarding), and file toward the end of the traghetto. They don’t really wait until it’s full, and they don’t have a set schedule, either – but you won’t have to wait long to get across the canal. Note that most people don’t even bother sitting down on a traghetto ride – they simply stand as they glide across the Grand Canal, disembarking quickly on the other side.
>> Learn more about getting around in Venice at the official ACTV website, the company that runs public transit in Venice.
photos, top to bottom, by: Mike_fleming, keepwaddling1, Son of Groucho, dalbera, yellow book