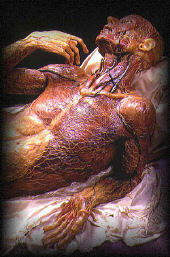 In Florence’s Oltrarno neighborhood, probably the biggest attractions are centered around the Pitti Palace, the former residence of the ruling Medici family. But for something a little less stately (but no less historical), you might want to take a peek into La Specola, the Museum of Zoology & Natural History. It’s right next to the Pitti Palace, but is a tourist sight of a completely different color.

La Specola is a collection spanning more than 30 rooms, with objects like fossils and stuffed animal specimens, but by far the most intriguing part of the museum is the room full of anatomical human wax models which date from the 18th century. Rather than being the Florentine version of Madame Toussaud’s, however, these models served a very specific purpose – they were intended to aid medical students in understanding the human body. Many of the figures have been stripped of their skin, and some are exposing the many layers of nerves, muscle and organs underneath. The displays are entirely made of wax, but the molds for each one were created from actual corpses – so there’s a shocking degree of realism here.

Opened to the public in 1775, La Specola is part of the Museo di Storia Naturale di Firenze and is housed in what was once an astronomical observatory (“la specola” means “observatory” in Italian). While the wax human forms are certainly a highlight for anyone searching for “weird and wonderful Florence,” the rest of the museum is worth a peek as well. There is, for instance, a stuffed hippo which was actually a pet of the Medici family in the 17th century. And the bug lovers will appreciate the extensive collection of insects.

Check out this video of La Specola from GeoBeats:

Check out the other weird and wonderful Florence attractions, too!