Seeing an Italian Football Match at San Siro in Milan 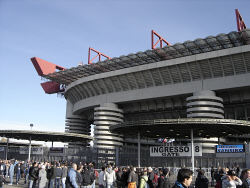 I’m not a huge sports fan, but I’m married to one – so that means I do pay attention. Most of the time I’m only vaguely aware of what’s going on in whatever game I’m watching (regardless of the sport), but it’s hard to be in Italy and not be acutely aware of how much a part of daily life soccer is here. There are two “home teams” here in Milan – A.C. Milan and Inter. The former is a powerhouse of a team, full of stars from Italy and elsewhere, but a team which isn’t having the best season. The latter is currently leading the standings for the national championship, and if they win it’d be for the second year in a row. In other words, Italy in general is a good country to visit if you’re a soccer fan – and Milan is particularly good.

The husband and I decided rather spontaneously to go to an A.C. Milan game the other night, because they were playing a team that isn’t doing so well this year so we figured it’d be easy to get tickets and get in. There’s a tram that’s supposed to stop right in front of San Siro, the stadium where both Milan and Inter play, but the tram we were on stopped long before it got to the stadium. From there, everyone piled onto a waiting bus which dropped us all off in front of San Siro. We’re still not sure why they did it that way, but it worked out.

We jumped in a line at the nearest ticket kiosk – although using the word “line” here is pretty generous. Italians aren’t generally known for their queuing skills. As an aside, this still works out okay in most shops and such, because people just pay attention and know whose turn it is next, so it isn’t generally as unfair or chaotic as you’d think it might be. With a bunch of football fans descending on the ticket windows, the clock rapidly approaching game time, it was exactly as chaotic as you’d expect.

When it was finally our turn we bought two tickets in the second section from the top for €28 apiece, and we had to each present a piece of identification. I think this is true throughout Italy, so there’s a tip if you’re hoping to attend a football match in Italy – bring an ID card. It doesn’t have to be a passport; they don’t write down the ID number or anything, they just type in your name which then appears on your ticket. In our case, an Oregon driver’s license was just fine with the gal behind the counter.

Tickets in hand, we stopped at an elaborate food cart for a quick dinner of sausage sandwiches, which we carried with us into the stadium. After showing our tickets to an official at the outer gate of our “ingresso,” we then went through what I suppose is “security” – they were checking the occasional purse or backpack, but didn’t check us. I guess we look innocent. From there, we then came to a wall of those tall revolving gate things (the kind that look like revolving doors only they’re metal bars instead of glass doors). There’s a slot to one side where you put the bar-code end of your ticket, upon which there’s a loud beeping noise and a green light appears which indicates that you can push through the revolving gate. It’s really incredibly clever, if you ask me.

San Siro is massive, capable of holding more than 80,000 spectators. But this behemoth was well-designed – at least from an entrance/exit standpoint – we went to the entrance number indicated on our ticket, and there was only one stairway that only had one exit point, right onto the level of our seats. Later, when we left the stadium, the exit ramps were extremely efficient and there wasn’t any crowding or bottle-necking at the exits. Of course, the place was only half-full (at best) for the match we attended, so maybe it’s more of an issue when all 80,000+ seats are filled.

At any rate, our section was mostly empty, although our seats were occupied already when we arrived – so we just claimed some nearby seats. The seats themselves are pretty dirty, and many regular fans brought little folding seat cushions with them to the game. People who didn’t have the seat cushions grabbed some of the free newspapers which were being distributed outside the stadium, which they then used as seat covers so as to keep their designer pants clean. The seats also don’t have seat-backs, and the only stairs with handrails are at the ends of sections, so the whole thing has a much more open feel than I’m used to in sports venues in the U.S. Plus, as someone who has a serious (and completely irrational, I know that) fear of heights, the steep stairs to get to and from our seats were more than a little intimidating. But the open-ness of the stadium actually makes it feel more akin to a genuine Roman arena than any other sports venue I’ve ever been in.

L-R: The game in progress; the steep stairs to where we were sitting 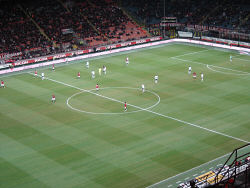 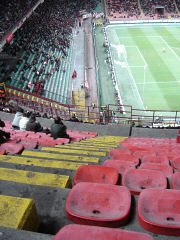 The home team’s most serious fans occupy one of the ends of the stadium, and come to each game bearing huge flags and banners. They also sing and chant team songs throughout the match, none of which I could make out. What doesn’t take an Italian speaker to understand, however, is the passion they have for the game and their team. The opposing team’s fans have a small section on the opposite end of the stadium, only in the very top ring of seats, and the whole thing is behind metal fencing stretching from the floor to the ceiling. I think that section has its own dedicated entrances/exits and toilets. This is a testament to how bad things can get when the most rabid fans of two opposing teams mix, and it’s not just for show. There have been instances of serious injury being caused by the fans of one team on the fans of another, and in at least one stadium I know of in Italy the “away” section is not only behind fencing but has netting over the top of it so the “home” fans can’t throw anything into that section, either. In the case of the game we saw where Milan was playing Lazio, the Lazio fans were vastly outnumbered by the Milan fans – but they were making a concerted effort to be just as loud. And the one chant of theirs that I understood was “culo, culo, vaffanculo!” – which is essentially a long way of saying “fuck you.” This came out, as you can imagine, whenever they thought a call had gone against their team unjustly, or in response to some specific chant from the Milan fans on the other side of the stadium. From our standpoint, it was pretty entertaining. 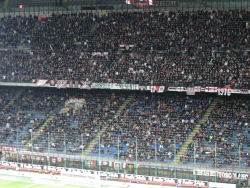 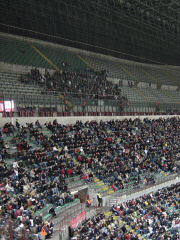 What wasn’t entertaining, on the other hand, was the halftime show. Or lack thereof. Of course, I’m used to halftime productions in the U.S., which are ridiculous in their over-the-top-ness, but I was expecting something during the 15-20 minute break between halves at San Siro. What we saw, on the other hand, was a few guys dragging a big tarp out to the center of the field which, when they unrolled it, just bore the team’s sponsor’s logo. That’s it. What’s more, I’m also used to being bombarded with not only music and sound effects but also information and play calls during sports events in the U.S., in person or when you watch them on television. At San Siro, the only time the announcers made a peep was when a team substituted one player for another. Other than that, it’s quite remarkable just how little information the fans are given in the stadium. This says, to me, that the average football fan in Italy isn’t interested in all the fluff – they just want to go to the stadium and see a game. I can’t help but wonder how overwhelmed they’d be at the SuperBowl, for instance.

You call that a halftime show? 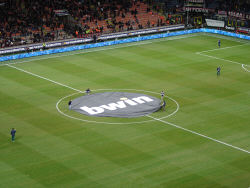 Upon exiting San Siro after the game, there is an army of trams lined up on the tracks outside the stadium just waiting to take away the crowds of fans. The trams are lined up one after the other (it’s all the same tram, route #16, which goes near the Piazza del Duomo) so that when one gets full (and they can get really full) a traffic-cop-type person blows a whistle and away it goes. Then the next tram in line gets full, and so on. It’s amazingly efficient. And I never saw a single person validating a transportation ticket on those rides.

Unfortunately, although the experience of being in San Siro was fun, the game itself was forgettable – A.C. Milan was resting most of their best players for a match they had coming up a few days later against Arsenal in the Champions League (which they subsequently lost anyway, dammit), and only managed to eke out a tie with a team that, in theory at least, they should have beaten easily. What’s more, my favorite player didn’t even set foot on the field. And yes, that kind of thing is important to me. So I’m hoping we get a chance to go to another match before we head home.

UPDATE: We went to another A.C. Milan game. My guy played, but this time they lost. Damn. At the second game we saw, however, we got there early enough to see the Italian national anthem – except they didn’t play it. I was disappointed, because it happens to be an anthem I adore; but I got to hear Milan’s theme song as the team was coming onto the field – and I have to say, it’s got just the right amount of overdone drama, so I was quite content with hearing that instead after all.

The next generation of Italian soccer fans. 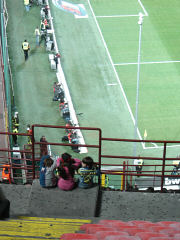 To recap – a couple of tips for people going to San Siro in Milan especially, but this also likely applies to other stadiums around Italy:

There’s more information about seeing a soccer game in Italy, and if you like Italian soccer be sure to check out the Italian site at The Offside soccer blog. Also see more info on San Siro itself (it’s amazing in its huge-ness, but it’s seriously ugly) and here’s A.C. Milan’s official website. I took some video at the game, but I’m waiting to hand it over to BootsnAll’s video expert – so if he deems it worthwhile, it’ll get posted here eventually!