Things to Know About Soccer Games in Italy 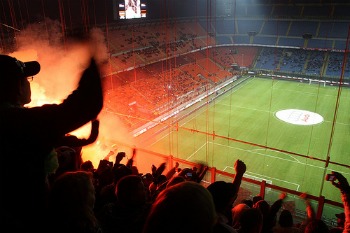 Let’s say you’ve already checked off the major museums and art galleries and Roman ruins in the Italian cities you’re visiting, you’ve got more time on your hands, and you’d like to experience something a bit less art-y. How about a game of Italian soccer?
Now, I’m a big fan of soccer in Italy – I go to games in Italy and I watch them on TV every weekend when I’m at home – but even if you’re not a huge sports fan, going to a game can be a cultural experience as much as a sporting one.
Soccer – called calcio in Italian – is one of the most popular sports in the country, and it’s relatively easy to see a match during your vacation. The main things to know before you go to the stadium on game day are:

Here’s an article I wrote with more information about Italian soccer for the traveler, which has a few more tips – and you can find out which stadiums are best for watching games in this episode of the Eye on Italy podcast with two soccer commentators in Italy: The Italian Culture in Italian Soccer, with Paul Visca & Max Patrick.
>> Find out more about Italian soccer and how to read an Italian soccer schedule
photo by funky1opti