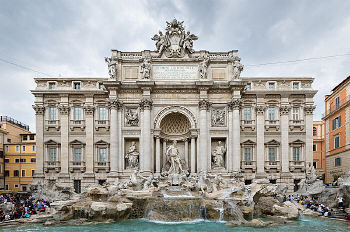 Anyone who’s spent any time in Italy knows that just about every town of even a modest size has a fountain or two decorating one side of a piazza or garden. But very few fountains have the international fame of the Trevi Fountain in Rome – this is a fountain we all know by name, and which tourist hordes make a point to see during their stay in Italy’s capital. So, why all the fuss?

Well, one of the main reasons everyone makes a beeline for the Trevi among all the fountains in Rome is that it’s appeared in so many movies that it’s practically a movie star. From the iconic “Roman Holiday” to the decidedly less so “When in Rome” (yes, the Olsen twins movie), the Trevi Fountain is so instantly recognizable as being part of Rome that it’s been the ideal backdrop for films for decades. Even if you’re not a Fellini fan, you’ve at least seen clips of Anita Ekberg’s famous Trevi Fountain bathing scene from “La Dolce Vita,” and the tradition of throwing coins into the Trevi was the basis for an entire book and movie, “Three Coins in the Fountain.” In short, the Trevi is almost a Roman celebrity in its own right, and even though it’s usually horribly crowded and a haven for pickpockets and trinket sellers, it’s still worth a side-trip when you’re walking through the city.

History of the Trevi Fountain 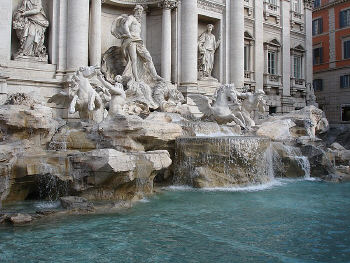 One of the first things you’ll notice about the Trevi Fountain – or Fontana di Trevi in Italian – is that it’s downright enormous. At 85 feet high and 65 feet wide, it’s the biggest fountain in the entire city of Rome. A fountain was originally built on this spot in the mid-15th century, when the tradition of building fountains to mark the end point of an acqueduct was rekindled, but this has always been the terminus of one of Rome’s ancient acqueducts – the Acqua Vergine. The acqueduct was destroyed by invaders in the 6th century, but repaired in the 15th century by order of the Pope when the first fountain was built. The Trevi Fountain you see today, which was completed in 1762, is still served by that same Acqua Vergine acqueduct.

The design of the Trevi changed several times as it was being built, as happens with construction projects that outlive the funding source. In the early 17th century, the Pope decided the existing fountain wasn’t dramatic enough and asked famed sculptor Bernini to come up with a new design. When the Pope died, so did the construction project, although one element of Bernini’s design can be seen in the current fountain – he moved the fountain from one side of the piazza to the other.

The Trevi Fountain project was taken up again in the early 18th century, and this time it continued even after the then-Pope’s death. In this case, even the designer, Nicola Salvi, didn’t live to see the final fountain. Salvi died in 1751 and the fountain was completed in 1762; the design is still predominantly Salvi’s, although another designer was overseeing the work at the end.

Design of the Trevi Fountain

While most people aren’t concerned with the allegories and symbolism of the fountain’s decor (especially since many are facing away from the fountain as they’re throwing coins), to the original builders the meaning was just as important as the water that flowed from the fountain. The star of the show is a figure called “Oceanus,” who is seen riding on a giant clam shell and represents water in all its forms – rivers, oceans, lakes, etc. – although perhaps the name most of us might recognize is that of Triton, Poseidon’s son who’s most often seen blowing on a conch shell. You’ll see him on the right side of Oceanus. 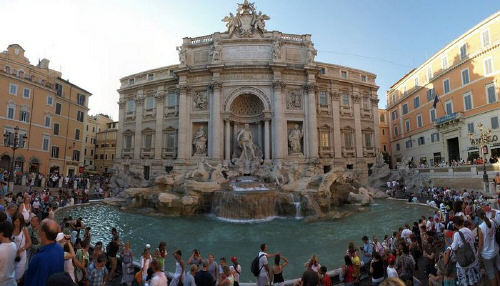 Great panorama shot of the Trevi Fountain & crowds surrounding it

Throwing Coins in the Trevi Fountain 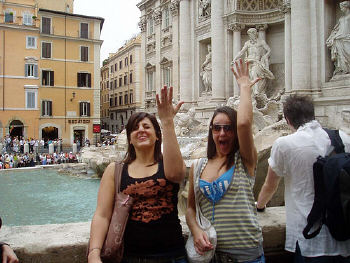 As mentioned, there’s a long-standing tradition about throwing coins in the Trevi Fountain – spend a few minutes watching people at the fountain and you’ll see that this is the main reason many people stop by. The original legend says that if you throw a coin into the Trevi – with your back to the fountain, throwing the coin with your right hand over your left shoulder – that will ensure a return to Rome. Perhaps thanks in part to the film “Three Coins in the Fountain,” a newer story also routinely makes the rounds that says throwing one coin means a return to Rome, a second coin leads to a new romance, and a third coin leads to marriage. You are welcome to believe (or not believe) either one – it all depends on your level of superstition, and the depth of your wallet!

(And clearly the whole thing about the “right hand over the left shoulder” isn’t even widely accepted, as a quick search through Flickr photos of people throwing coins into the fountain is testament to. I have no idea what good fortune the girls in the picture at the right thought the addition of crazy facial expressions might bring them.)

While there are regularly attempts to steal the coins from the bottom of the fountain, you may be pleased to know that the coins are collected every night and the funds have been used to fund a supermarket that serves the poor of Rome, the Italian Red Cross, as well as other local charities. And we’re not talking chump change, either – workers routinely pull roughly €3,000 per day out of the Trevi!

The folks in this video have the right hand/left shoulder thing down: