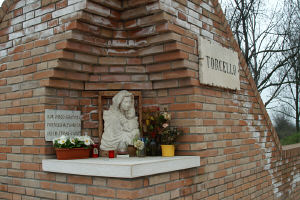 When even your aimless wandering in Venice hasn’t gotten you away from the crowds and you’re looking for a little escape, you can head to the other islands in the Venetian lagoon. Murano, being closest to Venice, is usually almost as crowded as Venice herself (especially in the busy summer season). Burano, being a bit further away, is a safer bet – but the island is famous for its colorful buildings and lace-making traditions, so it even draws a fair number of tourists from the main island. The island of Torcello, on the other hand, is almost always blissfully quiet.

Torcello is the furthest away from Venice of the three main islands in the lagoon that tourists visit at all, but it has a history that’s important to Venice. These days there are probably fewer than 20 people who actually live on the island, which is primarily a nature reserve now, but at one point it was where most of the citizens of the Republic of Venice actually lived. It’s where some of the first inhabitants of the lagoon set up a town after leaving the mainland (the terraferma) to escape Attila the Hun and his marauders. That was back in the 5th century. By the 10th century, the population had swelled to around 10,000 people and Torcello was an important island city.

The island of Torcello eventually turned into largely swampland in the 12th century, which necessitated the island’s residents to leave for more solid islands. Most of the buildings were dismantled long ago, but there are still worthwhile sights on Torcello. The primary attraction is the Cathedral of Santa Maria Assunta, which dates from the 7th century and contains beautiful Byzantine mosaics from the 11th and 12th century. They can’t rival the mosaics in St. Mark’s Basilica for size, but the attention to detail is the same, and you’ll be able to enjoy them in relative peace and quiet on Torcello. Also worth mentioning is a big throne made of stone that sits in the courtyard area outside the cathedral – it’s called “Il Trono di Attila,” or Attila’s Throne (although it has nothing to do with Attila the Hun), and the local superstition is that if you sit on Attila’s Throne you’ll return to Torcello someday. 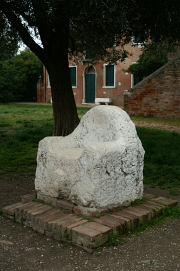 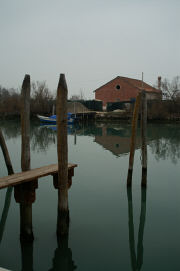 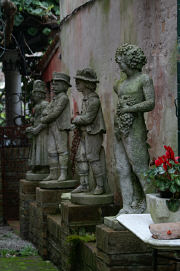 If you’re looking for some serious peace and quiet, you can even stay on Torcello overnight at the Locanda Cipriani. This is no cheap hotel (the cover charge alone for dining in the restaurant is €9!), but it’s sure to be a unique experience. There are a few places serving food on Torcello, too, including the Locanda Cipriani and the Villa ‘600 just across from it.

How to Get to Torcello: From the northern side of Venice, take the “N” vaporetto from Fondamenta Nove to Burano, then change to the “T” vaporetto for Torcello. (The “N” line stopped at Burano and didn’t go any further when I was visiting, but I’ve seen maps that indicate it stops at both. Just be sure to ask if the boat you’re on goes to Torcello or whether you need to change.) Before walking away from the vaporetto stop at Torcello, check to see what times the boat leaves so you know when to get back. You can also catch a vaporetto from the St. Mark’s stop, but it goes to the Lido first and takes much, much longer. If you forget to buy a vaporetto ticket before you board the boat at Fondamenta Nove, don’t worry – even though there isn’t a ticket booth nearby, you can buy your tickets on board the vaporetto.
Where to Stay: As far as I know, Locanda Cipriani is your only bet for an overnight stay on Torcello. And it doesn’t come cheap. You’ll find out more at the official website.
Places to Eat: The two main restaurants are at Locanda Cipriani (website above) or the nearby Villa ‘600 (the English version of that site doesn’t seem to go anywhere), though there’s a casual cafe on the main walk to the cathedral from the vaporetto stop. If you know how to play chess, be on the lookout for the chess board set up outside – and a proprietor who’ll invite you over for a game.
What to See: Cathedral of Santa Maria Assunta (open daily from 10:00-12:30 and 14:00-18:30; entry into cathedral alone is €4, extra fee to climb the bell tower)
Museum of Torcello (open Tuesday-Sunday from 10:00-12:30 and 14:00-18:30; you can buy a combination ticket to the museum and cathedral, or one that includes the museum, cathedral and bell tower)
Church of Santa Fosca (near cathedral, free to enter, same open hours)
Attila’s Throne (in courtyard, free to sit on it)

And if you visit in February, like I just did, you could get “lucky” and see how they do construction on an island without much solid ground! 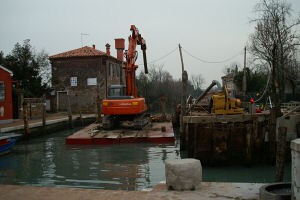