Train from Florence to Rome 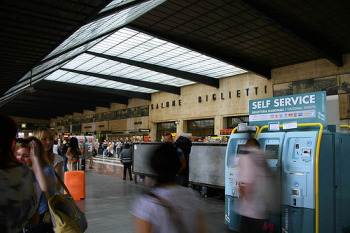 Rome and Florence are two of the most popular cities in Italy to visit, so it’s not surprising that the rail lines connecting them are well-traveled – especially in the high summer season. There are certainly other ways of getting from one to the other, but taking the train from Florence to Rome is by far the easiest and most efficient.

With such a popular train route, there are several trains from Florence to Rome per day – and several types of trains as well, so that you can pick a slower or faster train depending on your budget and the amount of time you have to spare. The fastest Florence to Rome trains can take as little as an hour and 40 minutes to get from station to station, while the slowest can take up to four hours.

Ticket prices on the trains from Florence to Rome vary according to the speed of the train as well as the class of car you choose. And remember that with the faster trains you’re typically obligated to buy not only a ticket but also a reservation for a specific seat on the train, too. The slower trains don’t require reserved seating, which means the overall price of the ticket is cheaper – and also that if you don’t buy a reservation you risk not finding a seat. Standing in the train vestibule is okay for a short trip, but for four hours that can get old really quickly.

>> More information about how to get from Florence to Rome