Train from Milan to Rome 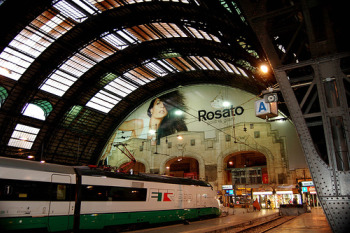 The two primary international airports in Italy are in Rome and Milan – but even though your itinerary may only include one of those cities, the best deals on flights may only be into the other one. Which is why you often find people who have no interest in visiting Milan flying into Malpensa Airport and then having to make their way to another city to really get their trip started. Taking the train from Milan to Rome, therefore, is a fairly common trip for visitors. Not only that, because these are the two main business cities in Italy, it’s a popular route with Italian workers, as well.

All it takes is a quick look at a map of Italy to see that Milan and Rome are a fair distance apart. There are certainly other options when it comes to getting from one to the other, but you’ll be hard-pressed to beat the newest high-speed trains for overall quickness and convenience.

Whereas the train from Milan to Rome used to take 5-6 hours (or more), the new high-speed “Frecciarossa” (red arrow) trains have cut that journey to a mere 3.5 hours. There are usually 2-3 stops along the way, but there are no train changes necessary and stops are minimal on purpose to speed up the trip. Trains leave Milano Centrale station headed for Roma Termini station 1-2 times every hour throughout the day, although the fastest trains run once per hour.

When you start looking at ticket prices for the train from Milan to Rome, that’s when you might start to think, “Hey, six hours doesn’t sound so bad…” A first class ticket on the fastest train from Milan to Rome runs about €115, and a second class ticket on that train is about €90. Slower trains still aren’t cheap, however, as first class tickets on a 6.5-hour train cost about €62 and second class tickets are about €46. And with most of these trains you’ll need to buy a reservation in addition to your ticket – it’s not just recommended, it’s required.

Train trips in Italy like the train from Milan to Rome are ideally suited to people who don’t have much time to dilly-dally on vacation, but it’s definitely an expense. If you’re going to be taking a few train trips on high-speed trains in Italy, or over long distances like this, having an Italy Rail Pass drastically reduces the cost per trip.

>> More information about how to get from Milan to Rome