Train from Rome to Florence 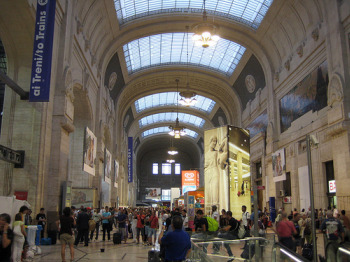 Rome is Italy’s primary entry point for overseas visitors, but very few people stay in Rome for their entire trip. The good news is that Rome is not only a major air hub but also a major rail hub in Italy, making getting from Rome to just about anywhere else relatively easy. But even when you’re talking about a popular and simple trip like getting from Rome to Florence by train, you have some options you need to consider.

Although there are a few ways you can make this journey, taking the train from Rome to Florence is the most straightforward. Even if you’re thinking about renting a car in Italy to meander around the Tuscan countryside once you get into Florence, I’d still recommend you tackle Rome to Florence by train. It can be a quick trip on the newer high-speed trains in Italy, and it’s far less stressful.

There are Rome to Florence trains that leave Rome’s Termini Station about once an hour throughout most of the day, and the length of the journey can range from as little as one hour 40 minutes to as much as four hours if you’re on one of the slower trains. The faster trains are great if you aren’t blessed with an unlimited amount of vacation time, because you’ll spend more time sight-seeing and less time transferring from one city to another.

But there’s a trade-off – the faster trains also cost more. In addition to the higher price of the ticket on a high-speed train, these trains almost always require that you buy a reserved seat – and that’s on top of the ticket price. A first class seat on the fastest trains costs €56 as of this writing, and second class on that same train costs €40. Even the next step down in terms of train speed (which is a 2.5-3 hour trip) costs €35 for first class and €25 for second. The slowest trains, by contrast, take around four hours and can cost as little as €25 for first class, €16 for second class.

>> More information on how go get from Rome to Florence