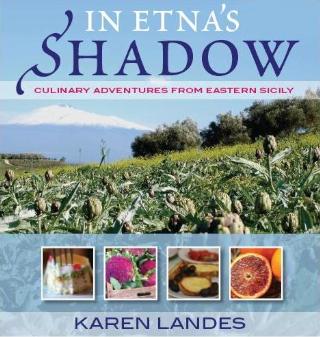 Sometime last year I was contacted by an expat living outside Naples who was interested in contributing some posts to WhyGo Italy. After corresponding with her for a bit, and reading some of her writing on her own blog, I was sold – and I’ve been really happy to put her work up on the website here. So when I heard that she was also waiting for the publication of her first book, and that it happened to be about Italy, I was really looking forward to checking it out. Now that I’ve spent a little time with it, I can definitely say it was worth the wait.

Karen Landes has a deep and abiding love for Italy, especially the parts of the country that are south of Rome. In fact, that’s the name of her blog – South of Rome – where she regularly reminds anyone who’ll listen that there’s plenty to see and do in The Boot besides the northern sights most people concentrate on. She’s currently living near Naples, but before that she lived in eastern Sicily for a couple of years – and that’s the part of the country that she focuses on in her new book, In Etna’s Shadow: Culinary Adventures from Eastern Sicily.

Based on the word “culinary” in the title, and the beautiful food photographs that populate every page, you might assume this was a cookbook. It’s not. Yes, there are a few brief recipes included, but I’d call this book more of a love-letter to a food culture. Even a casual flip through In Etna’s Shadow is enough to demonstrate Karen’s clear affection for both the food and the people of Sicily – and fortunately she’s also been gifted with not just a fantastic eye for photography but also the ability to put her affection into words. 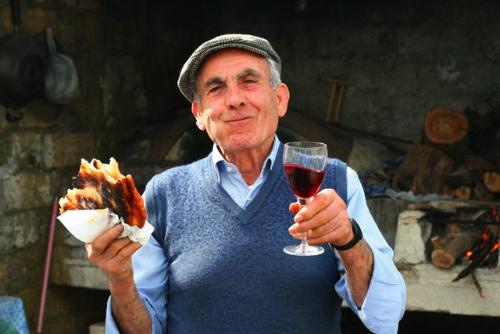 In Etna’s Shadow is broken down into chapters like “Fruits & Vegetables,” “Olives,” “Bread,” and even “Snails.” Each chapter contains gorgeous photographs and some background about each topic, telling the reader about why it’s important to not only the kitchens of Sicily but how that particular food or food group informs the culture or fits into the local history. Additionally, Karen has included a list of the Sicilian street markets and a market schedule, a chapter about Sicilian food festivals, and a look at Sicilian fast food. So while foodies of all stripes will enjoy this book for the information it contains, travelers in Sicily will find it helpful if they want to explore traditional local cuisine. As Karen herself says, “This book is designed so that you learn about the people, the history, and culture through food. I called them ‘Culinary Adventures’ because that’s what they were – a way to get out and track down the foods around me.” 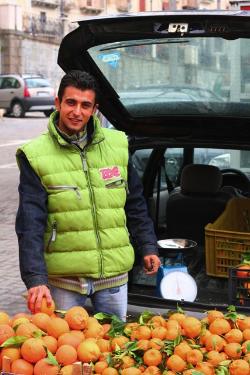 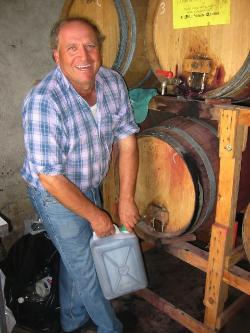 Karen is someone who isn’t content to just do nothing, so when her family arrived in Sicily she began exploring immediately and, she says, was “fortunate to meet a couple that made olive oil and other typical Sicilian products from their small farm” not far from where she lived. She decided to give writing a try, and because of her early introduction to the local culinary traditions, food was an obvious topic. But rather than add yet another Italian cookbook to the bookshelves of the world, she thought she’d focus more generally and give people an introduction to the foods of the region. This way, travelers and expats in the area would have a broader understanding of the cuisine instead of a simple how-to manual. In a way, she’s teaching us to fish – not how to cook a fish.

As you can tell, I’m a fan of this book. It’s page after page of lovely, colorful photos, and it’s informative to anyone who’s interested in food or Sicily. In Etna’s Shadow is a small book, so it’s easy to read the entire thing in one sitting – and would be a pleasure for any foodie to add to their collection. And really, if you’re not a foodie before you sit down with In Etna’s Shadow, I’d be shocked if you don’t fancy yourself a foodie when you’re done. At the very least, it should make you either quite hungry or put you in the mood for a trip to Sicily – or both.

So, well done to Karen on her first book, and I encourage all of you to check it out!

all photographs by Karen Landes & may not be used without permission

Check out some of the other Italy book reviews I’ve done on WhyGo Italy, too.

Full Disclosure & Whatnot: Just so y’know, the author sent me a copy of this book for review purposes.