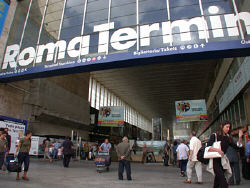 Finding a place to sleep in Rome is not the trouble. There are so many hotels in Rome that finding a vacant bed, even in the high season, probably won’t be an issue. Finding a bed that doesn’t cost you an arm and a leg, on the other hand, could be.

In Rome you have essentially two choices – sleep on a budget or sleep near the sights. If you choose the latter, your options are limitless, because every major tourist attraction is surrounded by hotels. You’ll pay a premium for these rooms, but you’ll also have the advantage of being right where you want to be as soon as you set foot outside your hotel. This is especially nice for the perfect evening passeggiata, and if your time in Rome is limited – provided, of course, that your budget allows for such a splurge.

If, on the other hand, your budget is limited, you’re not completely out of luck. Rome might not be cheap, but there are places to stay that will help you save money. The vast majority of them are concentrated in the neighborhood around the Termini Station, which means that they’re not ideally situated for a romantic evening stroll with the Colosseum as a backdrop, but there are tons of bus lines that run to Termini so you can get to and from where you’re going with ease.

The number of hotels and hostels around Termini is such that if you tripped over a cobblestone and fell three feet in any direction you’d probably land in the lobby of a hotel – and I’m only just barely kidding. All but one of the true hostels in Rome are located in this neighborhood, as well as the bulk of the city’s one- and two-star hotels. There are also three-to-five star hotels in this neighborhood as well, and they will likely cost less than a hotel with a similar number of stars that’s within walking distance of, say, the Pantheon. So you could save a bit of money by staying in a three-star hotel near Termini while avoiding hostels or one-star hotels if you want to.

If you’re visiting Rome during anything but a high season, you could easily walk out of Termini Station without a reservation and find a hotel with a room at a price you’re willing to pay. I’d advise sticking to the North and East sides of Termini, especially if you’re a woman traveling alone, because after dark the Southwest side felt a little more uncomfortable to me. Nothing happened to me, and I was told by the folks who work in the hostels on that side of the station that they and their female guests have never had any problems, but my rule of thumb is that if something doesn’t feel right you should go with your gut. So for my part, I’d prefer to stay North or East of the station. Additionally, these areas are full of foreign embassies, police stations and other government buildings, too, so there’s no shortage of armed guards milling around on various street corners.

Right around Termini there are grocery stores, laundry facilities, internet cafes, countless bars, restaurants and fast-food places – but ambiance isn’t exactly this neighborhood’s forte. No, this is where you come to sleep cheap in Rome, not where you come to fall in love with the city. For that, you have to hop on a bus or a Metro train and get into the historic center. But by staying in a hotel or hostel near Termini, you’ll be saving enough money so that you can spend an extra day or two getting to know Rome.

>> In my book, Rome’s best party hostels all just happen to be a stone’s throw from Termini!

>> If you’d prefer to look further away from Termini for your bed, then these hostels away from Rome’s train station may fit the bill perfectly.