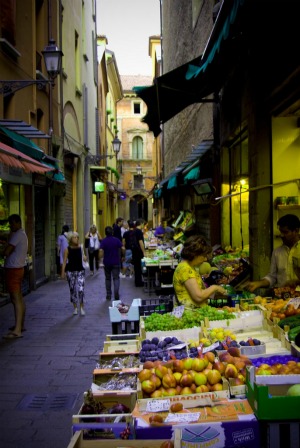 Even in a country like Italy that is an undisputed heavyweight among foodies, there are cities that stand out as being serious food destinations – and Bologna is just such a city. It’s the capital of the Emilia-Romagna region, which gave the world many things we now consider Italian staples. In other words, if you experience nothing else in Bologna, you’ll certainly eat well.

>> Bologna appears on my 3-week Italy itinerary for foodies!

Bologna is home to the world’s oldest university, so although it’s not a popular tourist destination in the same way that other Italian cities of similar size are, it still has a real international feel. You aren’t likely to see vendors selling tourist tchotchkes in every piazza, or find that everyone you meet speaks at least a little English, and these are only a couple of Bologna’s charms.

The new high-speed Italian trains run through Bologna, so it’s not a bad place to use as a homebase for exploring the region – you can even get to Milan and Florence quickly by train. On this page, you’ll find some basic information to help you plan your Bologna trip, with links to other articles for more details.

Where to Stay in Bologna 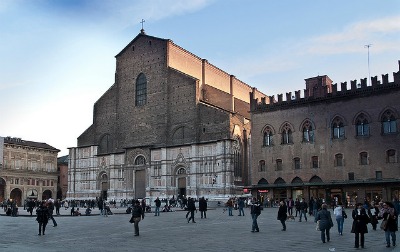 Although the metro area is quite large, the historic center of Bologna is easily explored on foot, as it’s small and flat – so as long as you’re staying in the city center (inside the main road that circles the city) you’ll be close to all the main attractions. Bologna’s main train station, Bologna Centrale, is just outside the city center to the north, so that also makes it easy to get back and forth to a centrally-located hotel.

It’s worth noting that, if you’re driving in Italy, driving in and out of (not to mention parking in) the historic center can be a challenge. Having a car at your disposal can be a perk in this part of the country, as it makes day trips to places like Modena easier, but it also presents some difficulties. A lack of parking especially would be one drawback of a hotel in the city center, so if this is a concern then it’s a good idea to ask about parking when you’re looking at hotels.

Here are a couple resources to help you find accommodation in Bologna:

Quick search for hotels in Bologna:

What to Do & See in Bologna 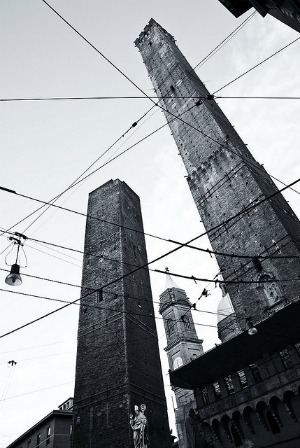 As mentioned above, perhaps the main thing to do in Bologna is eat. You’ll recognize many of the menu items, as the Emilia-Romagna region is where several famous Italian delicacies come from. Local specialties include lasagne, tortellini, prosciutto, mortadella, parmigiano-reggiano, balsamic vinegar, and bolgnese pasta sauce – most of which should be familiar names to anyone who’s eaten in an Italian restaurant. The version you’ll get in Bologna will likely be different than what you’ve had elsewhere, of course, and there are other less-famous dishes that are very typical of the region and shouldn’t be missed. I’m particularly fond of the piadina, which is the name for both a type of flatbread and the sandwiches that are made with it.

Between meals, you can occupy your time in Bologna by visiting the city’s many beautiful churches, wandering through the famous university, climbing the taller of the two adjacent leaning towers, strolling protected from the elements by the sometimes elaborately-decorated arcades covering the sidewalks, and shopping for either food goodies or clothing. Just remember that one nickname for Bologna is “la grassa,” or the fat one – which alludes both to its rich cuisine and its reputation for being expensive.

Outside the city center, there are several excellent day trips, including the factory museums for both Ferrari and Lamborghini, balsamic vinegar makers in Modena, and the pretty city of Parma.

Here are some articles about things to do and see in and around Bologna:

How to Get to Bologna 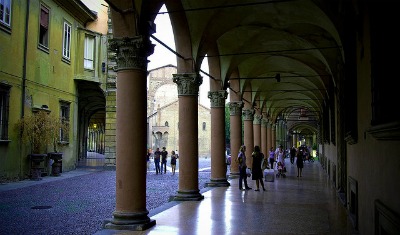 As mentioned earlier, Bologna is a major hub on the newer high-speed Italian rail line, which makes it quick and easy to get in and out of the city by train. The trip from Bologna-Florence is under 40 minutes one-way on the fast train, making Florence a great day trip option from Bologna (or vice versa). And although there’s an international airport near Bologna, you’re more apt to find cheap flights to Milan than to Bologna directly – so it may please you to know that the fast train from Milan-Bologna makes the trip in just over an hour.

The city is also at the intersection of a few major highways in Italy (the A1, A13, and A14), so it’s easy to access via car. Just remember that the historic center wasn’t designed for modern cars, so navigating the sometimes-narrow streets and finding parking in this densely-packed area can be difficult. Check with your hotel for good parking options if you’re driving, and check with the Via Michelin site to get driving directions from address to address. (I still recommend having a GPS unit in your car, along with a good map!)

The closest airports to Bologna are Forlì Airport (FRL) and Bologna-Borgo Panigale Airport (BLQ). The latter is served by both easyJet and Ryanair, among other discount airlines, as well as many major carriers. Still, given the proximity to Milan and the ease of getting back and forth via the high-speed trains, if you find cheaper tickets to Milan’s Malpensa Airport (MXP) that’s a good option, too.