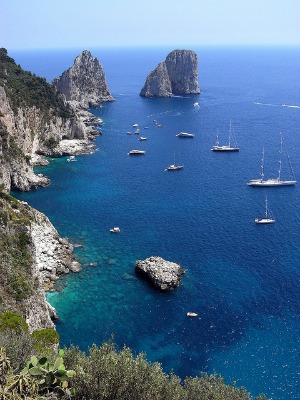 The island of Capri, like the town of Sorrento, is lumped in with the Amalfi Coast despite not technically being part of that famed coastline, and for many reasons it’s easy to understand why. What do these destinations have in common? Sun, sparkling water, gorgeous views, and a reputation for being the playgrounds of the rich and famous. It’s no wonder they remain popular tourist destinations.

I say “remain” because – and the ruins on Capri will attest to this – this island has been considered a vacation resort since Roman times. Capri (pronounced KAH|pree, with the emphasis on the first syllable) lies off the tip of the Sorrentine peninsula and is an easy day trip from Naples, Sorrento, or the Amalfi Coast. Because it’s a boat ride away, it’s the kind of day trip in which you need to pay attention to the time in order to make sure you don’t miss the last boat back. Alternatively, you can alight on the island and plan to stay awhile. Like any great day trip destination, the atmosphere changes when the day trippers aren’t around.

On this page, you’ll find some basic information to help you plan your Capri trip, with links to other articles for further details.

Where to Stay on Capri 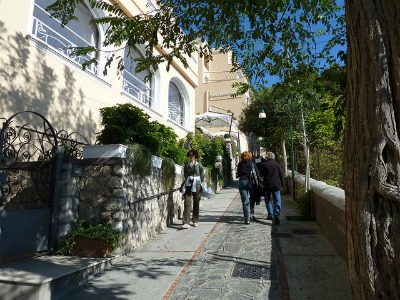 Although Capri is a fairly small island, it’s quite mountainous and getting around takes some effort. There are two “town centers” on the island – one, close to the ports and the water, called Capri and another, atop the mountain that makes up the main part of the island, called Anacapri. There are buses that run regularly between the two towns and to pretty much any point in between (and taxis to take you where the buses won’t go), but when you’re choosing a hotel your main choice should be centered on what part of the island you’d like to call home.

The town of Capri (sometimes even called “Capri town” to distinguish it from the island itself) makes up the central and eastern part of the island. It’s not at water level, but it’s far closer to the water and the two ports than Anacapri. It has the feel of a larger town than Anacapri, with more going on (particularly around the ports).

Anacapri is legally its own town, and comprises the western part of the island, which is where the island’s highest peaks are. The town itself occupies a high point, but not the top of the island – that’s accessible via a chair lift from Anacapri.

Capri and Anacapri are similar enough that it almost doesn’t matter which one you choose for your hotel. If you’re particularly interested in one activity or another during your stay – hiking, swimming, etc. – just keep in mind where your hotel is in relation to said activity. In other words, if your focus is on the water, it might be a good idea to not isolate yourself so much in Anacapri.

Here are a couple resources to help you find accommodation on Capri:

Quick link to search for hotels on Capri:

What to Do & See on Capri 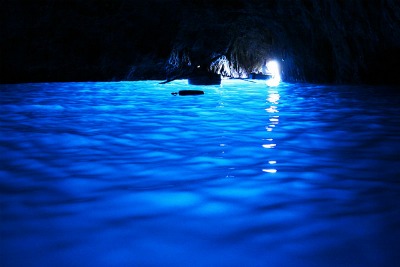 As mentioned earlier, Capri has been a vacation resort destination for more than 2,000 years – so while it may be the kind of place to sit with a cocktail in hand and stare at the water for as long as you like, there’s history on this island as well.

There were 12 Roman villas on the island of Capri, all built from 27-37 AD when Emperor Tiberius actually governed from Capri rather than Rome. The biggest is Villa Jovis in the eastern part of the island. Other villas that are considered tourist attractions are modern buildings – one in Anacapri, Villa San Michele, built in the same spot as one of Tiberius’ former villas.

The most popular activites on the island involve the natural beauty of the place – hiking, boating, and swimming are all common ways to spend a day on Capri. The highest point on the island, Monte Solaro, is accessible via a relatively easy trail. There are interesting rock formations around the island, including the Arco Naturale – a natural arch – on the east coast and a collection of three “stacks” just off the coast of the island. There’s a “philosophical” park on the western coast, established by a Swedish author and decorated with quotes from different philosophers.

The most famous natural landmark on the island, however, is the Blue Grotto – the Grotta Azzurra. When the weather and sunlight are just right, the interior of the sea cave glows with blue light. It’s only possible to enter when the tide and sea conditions permit, and even then the entrance is so small that visitors must lie on their backs in row boats to get in.

Capri, like the towns on the Amalfi Coast, is also noted for its high-end shopping. If you’ve got money to burn, you’ll have no problem spending it here.

How to Get to Capri 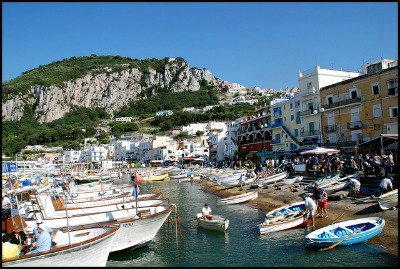 As it’s an island, Capri is only reachable by boat – and the condition of the sea can dictate whether boats are running on a given day. Departures from Naples and Sorrento are more reliable, as the boats are larger and more able to withstand rougher seas. Boats have a limited season from the Amalfi Coast anyway, and even during the sailing season they may be canceled if the weather is bad.

The closest airport to Capri is Naples Capodichino Airport (NAP), which is very close to the Naples city center. To get directly to Capri from the airport, take a taxi to Molo Beverello and buy tickets for the next boat once you get to the port. You can buy them in advance, too, but since you never know if everything will be on time at the airport it’s usually easier to wait until you get to the port.

photos, top to bottom, by: kudumomo, Jessica Spiegel (and may not be used without permission), photographerglen, Kasia!!