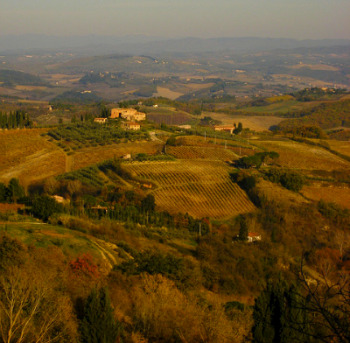 It may be hard to convince someone whose heart is set on sunlit Tuscan hills and sparkling Ligurian beaches that a trip to Italy in November is really a good idea, but anyone who’s on a strict budget will immediately see the appeal.

Weather in November in Italy

If it wasn’t already raining and cold by the end of October in Italy, expect both of those things in abundance in November. In some areas you’ll still get lucky with relatively warm days, but most of the country is headed straight for winter weather.

Since the temperatures pretty much always go up as you head south in Italy, your best bet for finding the last warmth of autumn is to head south as well. Even if you do concentrate your trip in southern Italy, it’s not a bad idea to carry a small umbrella around anyway – and if you’re in the north, an umbrella (not to mention a warm coat) is basically a necessity.

There are enough indoor attractions in most parts of Italy that a little inclement weather isn’t enough to keep visitors away, but if you’d like to focus your trip on something like a biking tour in Tuscany then November may not be ideal. The weather does tend to keep the crowds at bay, however, so that may be enough of a reason to pack a sweater and umbrella and brave the rain.

Temperatures in November vary depending on where you are in Italy, but as a general rule of thumb these are the ranges:

>> Be sure to check a current weather forecast for Italy before you leave home, as the weather can change. Check my Italian weather page for seasonal temperature and rainfall averages in a few Italian cities.

Holidays in November in Italy

While Halloween is only starting to catch on more recently in Italy as a day for costume parties, November 1st has long been a standing holiday on the Italian calendar – it’s All Saints Day (in Italian it’s Ognissanti or Tutti i Santi). This is a day when families honor their dead relatives, often visiting cemeteries to leave flowers and clean up graves. There are also sometimes more public celebrations in town centers. All Saints Day is a national holiday in Italy, so don’t be surprised if more than a few shops and attractions are closed for the day.

There are also more food festivals in November, some of them continuing on from October – like the many truffle festivals in northern and central Italy. November is typically when the vendors who sell roasted chestnuts are out in force in many Italian towns, and some places even have chestnut festivals.

It’s always a good idea to check the local calendar of events for the places you’ll be visiting during your trip to see what’s going on when you’re there – in particular, be on the lookout for any saint’s days, as it’s quite an important celebration when a town honors its patron saint.

>> Check my holidays in Italy page to find out some of the things going on this November in Italy.

Why go to Italy in November?

The onset of colder and wetter weather in November is enough to make many people think twice about planning a trip to Italy at this time of year – but there are a couple of reasons why November can be a good month to visit.

First of all, any budget traveler will appreciate the lower prices available in November. Your flight to Italy will cost far less in November even than in October, and rooms in Italy hotels have dropped to their low season rates by November as well.

In addition to lower prices, less favorable weather also brings with it smaller crowds. Even the folks who stuck it out through October usually want to head home before the November chill takes hold, so there aren’t long lines to get into popular attractions. And again, if you’re at all interested in food or wine, November is the tail end of the country’s main harvest and food festival season.

Keep in mind that some attractions will revert to their low season hours – which mean they’re not open as early or as late – but if you can adjust to that and the unpredictable weather, Italy can be a great place to be in November.