Top 10 Things to Do in Milan 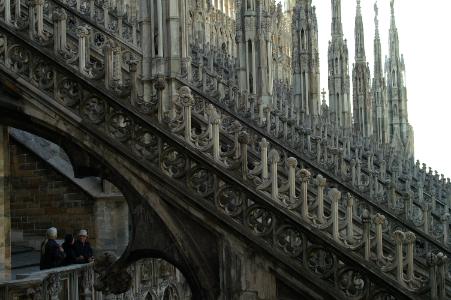 Milan isn’t at the top of most tourist’s must-visit lists when they come to Italy. I understand that. In fact, for a first-time trip through Italy, I don’t even recommend that people spend a single day in Milan. But this bustling city of business, banking, and fashion has captured my heart (no doubt due in part to the friends I’ve made there), so I can’t leave it off the list of cities in my “top 10 things to do in” series. Besides, although there aren’t as many big tourist hits in Milan as there are in, say, Rome or Florence, there are still some great sights and activities in the city to keep you busy and happy. So here are my recommendations for the Top 10 Things to Do in Milan.
Once again, I’ve listed these in descending order from my top suggestion on down, so if your only exposure in Milan is due to a long layover at Malpensa or something like that you can still check off at least the #1 suggestion (and perhaps a couple other quick things while you’re at it). For most tourists, I still don’t think Milan warrants much time – perhaps a day or two – but a well-planned two-day visit to Milan can probably include everything on this list.

Top 10 Things to Do in Milan (According to Jessica)

So, there’s my list of what the top 10 things to do in Milan are. What do you think? What would have made your list that didn’t make mine? What would you take off my list? Let me know!
Note: I updated this list in late 2011, removing something that’s near and dear to my heart – seeing a soccer game at the San Siro stadium. I still think this is a worthwhile thing to schedule into your Milan visit if you’re at all interested in sports or even just seeing how much the Italians love the sport, but I think the things on the list above are better apt to give you a feel for the city of Milan.
>> Find out more about what to do in Milan

original photos: Aperitivo photo by Jeroen Moes, La Scala photo by jovike, Parco Sempione photo by antonioperezrio.es, and Navigli photo by Tearsandrain – all other photos by Jessica Spiegel & may not be used without permission
[display_feed=https://www.italylogue.com/tag/milan/feed;title=Other articles about Milan;items=10;desc=0]