Budget Airlines that Fly to Florence 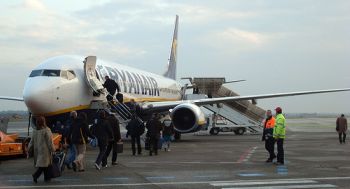 When you start doing research on a trip to Italy, one of the first things many people look for is what airports they’ll fly in and out of. In Italy, the largest and busiest international airports are in Rome and Milan – and those are the two airports most people look up when they’re checking on cheap airfare to Italy. But if your Italy itinerary includes neither Rome nor Milan, then spending your first day in the country in transit to where you really want to be is kind of a pain.
It is, therefore, a very good thing that there are many other airports in Italy you can choose to fly into.
Although it’s often overlooked as an entry point to the country, Florence does have its own – albeit small – international airport. In addition to that, there’s another (and larger) international airport in nearby Pisa. So finding cheap flights to Florence isn’t necessarily as difficult as you might think – especially if you don’t have a direct flight into Italy from your home airport in the first place.
Unfortunately, even if you have the option of flying directly to Italy, it’s not always going to be an inexpensive flight. For no reason I can determine flights into Italy often cost more than flights into neighboring European countries – even when you’re talking about the biggest international gateways into the country. That means if you’re on a tighter budget (or just looking for a way to save money on airfare) you may want to consider what I’ve dubbed the “two step” method of flying to Italy.
This “two-step” method is simply booking the cheapest round-trip ticket you can find into whatever European hub airport will then let you turn around and book a super-cheap flight to Italy. It does require a bit more logistical juggling on your part, but it can save you quite a bit – so if you’re up for it be sure to read my article about how to fly on budget airlines to Italy.

Budget Airlines that Fly to Florence

You’ve got the whole “two-step” method figured out? Excellent – then here are your options for flying into the Florence area. Florence’s own airport is one of two airports considered to be “primary” for the Tuscany region, but the other one – the airport in nearby Pisa – is arguably the main Tuscany airport. It’s worth checking flights into both for the best selection, and luckily getting from Pisa to Florence is quick and easy.

Florence’s airport goes by several names – the offical name is Peretola Airport, although it also goes by Amerigo Vespucci Airport or simply Florence Airport (airport code FLR). The airport itself is a short 15-20 minute bus or taxi ride from the Florence city center.
The budget airlines that fly to Peretola Airport in Florence are listed below, and some of the main cities from which they depart are listed after each airline name:

Although most travelers visit Pisa as only a brief stop or a day trip, the Galileo Galilei Airport (airport code PSA) in Pisa is a major airport for the Tuscany region. Not only is it served by several major airlines that don’t fly into Florence, it’s also a bit more popular with Europe’s budget airlines, making it potentially a very good choice for budget travelers. You can get a bus or a train directly from the Pisa airport into Florence’s city center.
The budget airlines that fly to Galileo Galilei Airport in Pisa are listed below, and some of the main cities from which they depart are listed after each airline name:

How to Fly Budget Airlines to Florence

As mentioned above, hopping on a discount airline from somewhere else in Europe can be a really cheap way to fly into Florence – but combining that flight with the one from your home airport to that “somewhere else” city does mean you’ll have to do more legwork on the planning front. There are several things you’ll need to keep in mind if you’re looking at this kind of trip, and I’ve covered them in a separate article linked below. Be sure to read it in conjunction with this one so you know exactly what you’re getting into.
>> How to Fly Budget Airlines to Italy
photo by a.froese