Getting Around in the Cinque Terre 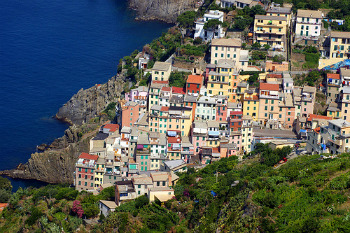 How to Get Around in the Cinque Terre

Hiking in the Cinque Terre 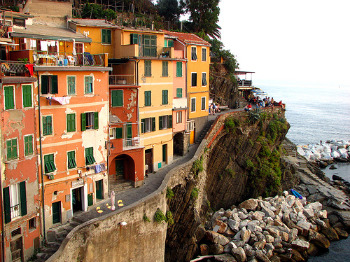 Okay, I said that hiking didn’t count as a method of transportation in my book, so what is it doing on this list? It counts if you’re staying in either Riomaggiore or Manarola (the two southernmost towns), because the trail between them can hardly be counted as a hiking trail – it’s flat and paved, even suitable for strollers.
Now that the hiking trail along the coast of the Cinque Terre is a National Park, access is more limited than it used to be – you can’t count on even that paved trail between Riomaggiore and Manarola being open after you’ve finished dinner in one village and wanted to stroll back to the other one. Not only that, if you’re more industrious and actually did want to do a more difficult hike from your hotel to dinner and back, you’d risk being stuck because the park closed the entrances to the trailheads.
So the bottom line is that while one of the trails is quite un-trail-like, walking from town to town still isn’t a reliable form of transportation at all hours. By all means hike the trails during the day, however – it’s the best way to spend your time in the Cinque Terre.
>> Learn more about hiking in the Cinque Terre

Taking Trains in the Cinque Terre 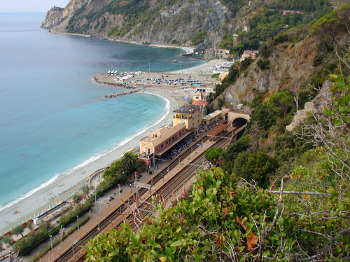 Each of the five towns in the Cinque Terre has its own train station, and although faster trains coming into the area don’t necessarily stop at each one there are slower trains that do stop at each town. These are sometimes referred to as “milk-run” trains, for the fact that they stop frequently. And they might be slow, but getting from the first to the fifth village (or vice versa) takes less than 15 minutes.
The main thing to keep an eye on when you’re hopping from village to village on the train is what stops that particular train will make. As mentioned, some trains don’t stop at every village, and although you’re unlikely to get too far off-course if you get on the wrong train it’s easier to avoid going all the way to – for instance – La Spezia than to have to backtrack once you’re there. 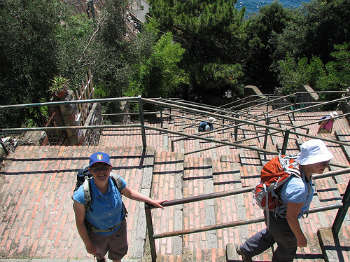 If you’re planning to visit the middle village, Corniglia, then you’ll have to plan on either walking there or taking the train, as it’s not on any of the boat routes. Corniglia is the only one of the five towns that’s not right on the beach – it’s sitting atop the cliff – so it’s not served by the local passenger boats.
The train station in Corniglia is at the bottom of the cliff, but you have a couple of options for getting between the train station and the town center. You can take one of the mini-buses that shuttles people back and forth or you can walk up the switchback-laden staircase (pictured at right). It’s a good workout, and then once you’re in Corniglia you can reward yourself with a hearty meal and some local wine.
Train tickets to get from town to town in the Cinque Terre typically cost €2 or less, but if you’ll be in the area for a couple of days – and especially if you’ll be doing any hiking – it’s usually a good idea to pay an additional few euro and get the Cinque Terre Card + Train pass. It’s your access pass to the trails between the villages and gives you unlimited use of the local trains. You can get them for different durations – from 1-7 days – to suit your needs.

Taking Boats in the Cinque Terre 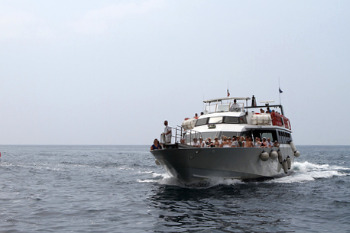 These are coastal villages we’re talking about, so it shouldn’t be surprising that there’s a passenger ferry service that connects most of them. As mentioned above, the middle town of Corniglia isn’t served by these boats, since it’s on top of the cliff rather than at the water’s edge – but you can take to the water to get between the other four. Some of the boats that serve the Cinque Terre also make trips to points further afield on the Ligurian coast, including the cruise port city of Portovenere and La Spezia to the south of Riomaggiore.
While trains tend to run about once every hour to each town throughout the day and evening, boat service is less frequent. There are 7-8 departures from each village in the high season, and that number goes down in the low season. Also, some boats skip more than just Corniglia, so be sure you check the route of the boat you’re boarding before you get on.
You can get a single ticket for a boat ride for as little as €3.50 if you’re just going from one village to the very next one, or pay as much as €15 for a day pass that includes stops at all four villages accessible by boat in the Cinque Terre. There’s a Cinque Terre Card + Ferry pass, however, that’s also worth considering if you’ll be in the area for a few days and want to keep your transportation options open. These passes include access to the hiking trails, unlimited use of the local trains, plus unlimited use of the ferries. These are only sold in one-day increments at €19.50 per day, so you can opt for a Cinque Terre Card + Ferry pass one day and then go for the Cinque Terre Card + Train pass for the rest of your stay if you’ve gotten your fill of the boats by then.
>> Learn more about visiting the Cinque Terre on the official Cinque Terre National Park website (often in Italian despite clicking on the Union Jack).
photos, top to bottom, by: twicepix, Her Own Journey, Fermented Thoughts, NH53, Marcel030NL