Getting Around the Amalfi Coast 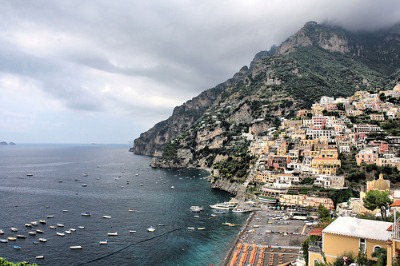 Like the Cinque Terre, the Amalfi Coast is a region that’s thought of as a single unit – people say they’re vacationing on the Amalfi Coast, because although they’ll be based in one town they’ll hop from town to town (and beach to beach) during their trip.
In regions where towns are close enough together that you can have breakfast in one, lunch in another, dinner in a third and still be back to the first within a few minutes of finishing dessert, different villages are treated almost like neighborhoods of one big city rather than the separate entities that they are.
This means that on the Amalfi Coast, like in the Cinque Terre, one of the most important things you can learn before you plan out your itinerary is how to get around within the region.
Here’s a rundown on all the ways to get around the Amalfi Coast – the ones you choose will vary depending on your travel style and budget, and you’ll likely combine a few during your trip. This list will help you explore your options.

How to Get Around the Amalfi Coast

Taking Buses on the Amalfi Coast 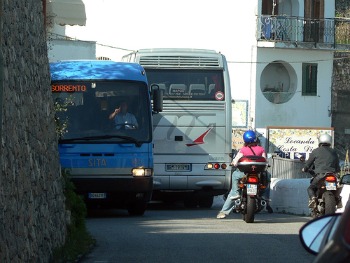 When you think of getting around Italy, trains likely come to mind first – but on the Amalfi Coast, it’s buses that ferry most visitors (and locals) around. Why? You’ll see when you get to the section below on trains.
Buses serve every town on the Amalfi Coast, some connecting just a few destinations along the coast and others connecting the coast with points further away (like Sorrento, Salerno, and even Naples). Most of the towns don’t have a bus station or even a large bus parking lot – instead, they have one (or a few) bus stops alongside the main road that hugs the coastline.
Amalfi is the only town between Sorrento and Salerno with a sizable bus parking lot, so it’s the main turn-around point on the coast. Routes are, therefore, typically listed as Sorrento-Amalfi and Amalfi-Salerno, with each route stopping at the towns along the way. Buses that go up into the towns that are high on the cliffs are separate routes, like the Amalfi-Ravello-Scala bus.
Unico Costiera bus tickets cover all the various buses that run through the Amalfi Coast towns – including SITA, EAVBUS, and even the Circumvesuviana trains – and you can buy them in tobacco shops and bars throughout the region, as well as in the train stations of Sorrento and Salerno. You can get bus tickets that are good for 24 hours (€7.20), or 3-day 3T “tourist travel” tickets (€18), or you can buy individual tickets for each ride (€2.40 for a 45-minute ticket, €3.60 for a 90-minute ticket).
Schedules vary by the season, and also by the time of day, so check with the local tourism office or whatever bar or tobacco shop you’re in buying bus tickets to find out what the current schedule is. (Or you can check the current schedule on the Unico Campania website – assuming it’s been updated!)
A few things you should know about bus travel on the Amalfi Coast: 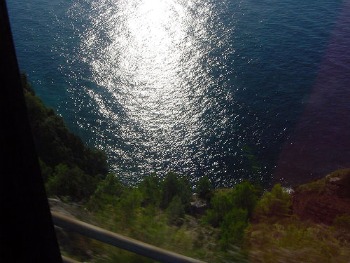 Driving on the Amalfi Coast 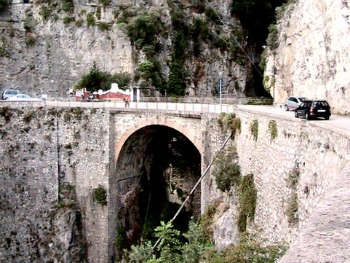 If you’ve done any preliminary research into an Amalfi Coast trip, you’ve probably read cautionary tales about the twisty roads along the coast, the crazy hairpins, and the huge buses that seem to barely slow down in corners. That may have scared you into skipping the rental car and sticking with public transportation – or, if you’re a driving enthusiast, that may have just whet your appetite.
I’ll admit that I’m not likely to ever get behind the wheel on the Amalfi Coast, even if I do get to the point of being interested in driving anywhere in Italy. The bus drivers and Italians have certain expectations of anyone on the road – that they know when to pause and let a car or bus come through from the other direction, when to inch forward in a hairpin as you’re passing another vehicle, when to honk to alert potential oncoming traffic of your existence – and anyone who isn’t in on the local road rules is both an annoyance and the cause of a potential traffic jam (or worse).
I’m not saying you shouldn’t drive on the Amalfi Coast – only that if you do, you really need to pay attention to what other drivers are doing and be able to learn the rules of the road quickly. This is especially true if you’re visiting during the peak season when the roads are more clogged than usual.
One option if you’d prefer to get in and out by public transit but want to try your hand at piloting something in and out of those hairpin curves is to rent a scooter or motorbike for a day. There are scooter rental places in nearly every town throughout the peninsula, including Sorrento, Amalfi, Positano, and Praiano. Be sure to observe the necessary safety rules, of course.
It’s not as critical on the Amalfi Coast to have a great driving map of the area, unless you’re planning to drive up into the hills or venture furthur off the main coastal road. It’s hard to get too far off course here, so usually you won’t need too much detail, but picking up a decent map at the rental car agency or bringing one from home is a good idea just in case.
>> Great news for drivers on the Amalfi Coast – a new parking garage opened in April 2011 between the towns of Amalfi & Atrani. It’s open after 5 years of excavating the mountain – yes, you’ll be parking inside the hills themselves – and it makes finding parking in the area much less of a hassle. There’s even dedicated parking in the garage for guests at one particular hotel in Amalfi.

Taking Boats on the Amalfi Coast 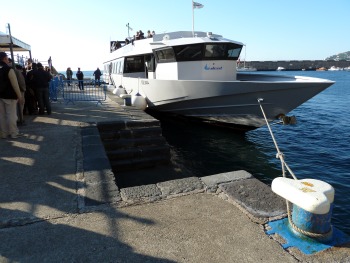 As this is a coastal region, it’s not surprising that one of the primary ways to get around is by boat – but because we’re talking not about a quiet river here but open sea, boat service on the Amalfi Coast is seasonal.
The regular season for boats on the Amalfi Coast is roughly the start of May through the end of October, but the seas have a higher tendency to be rough (thereby keeping boats from running) at the beginning or the end of the season. If the weather isn’t great outside your hotel room window, then you know already there’s a risk the boats won’t be running. Confirmation is the sign in the window of the booth where you’d buy boat tickets saying the boats are canceled for the day. (The people staffing the front desk at your hotel or hostel may know, too.) Boat cancelations don’t mean you’re stuck, however, because the buses are always running.
The Metro del Mare, essentially a bus on the sea, connects nearly every town along the Amalfi Coast and Capri – and even stretches to the northern points of the Bay of Naples and as far south as Sapri. Travelmar boats serve a few points along the Amalfi Coast as well as the island of Capri. Other boat companies that make some stops along the Amalfi Coast include Alicost, Alilauro, and Caremar.
Tickets on the Metro del Mare boats can run in the neighborhood of €9-15, depending how far you’re traveling, and Travelmar boats are in the €8-15 range. Travel times will vary depending on the route as well, but for refrence, Amalfi-Positano typically takes 20-25 minutes and Positano-Capri takes 30-45 minutes.

Hiking on the Amalfi Coast 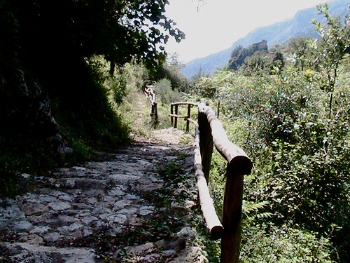 While hiking from town to town on the Amalfi Coast isn’t generally considered a method of transportation so much as an activity to engage in once you’re there, that doesn’t mean you can’t spend the morning hiking from one town to another in order to have lunch – and then hike back!
There are many hikes on the Amalfi Coast, but perhaps the most famous is called the Path of the Gods. It’s a 2.5-hour hike one-way, stretching from Bomerano to the cliffs over Positano. Check with the local tourism office to find out what hikes are in the area, and you can also ask about hiring a local hiking guide, too.
>> Learn more about the best places to go hiking in Italy, including the Path of the Gods

Taking Trains on the Amalfi Coast

This is an easy section, so I’ll make this quick: there are no trains on the Amalfi Coast.
None.
You can get as far as Sorrento or Salerno via train, and from there you’ll need to switch to another mode of transport to get to any of the towns along the Amalfi Coast – either beachside or up in the hills.
photos, top to bottom, by: christine zenino, Jake&Brady, fisticuffs, Rick McCharles, Jessica Spiegel (and may not be used without permission), Rick McCharles