Getting from Milan to Venice (and Vice Versa) 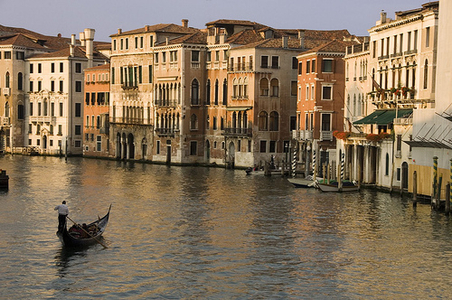 Even though I tell everyone who asks that they should be flying into Venice instead of Milan or Rome, I know that not everyone is going to pay attention to me. So for those of you who have flown into Milan and only then realize that you really don’t want to spend your vacation in this busy, bank-filled city, here’s what you’ll need to know about getting from Milan to Venice.

I’ve talked to people who do this as a day-trip (one way or the other), which should be enough to tell you that it’s not a terribly long train journey. If you don’t mind the idea of a long day, it’s totally possible to do a day trip to Venice from Milan or vice versa – but keep in mind that if you’re only spending a day in Venice you’re missing out on the city’s real charms.

Venice, even being a completely car-less city, is still quite easy to access via train, bus, and even by car. If you’re driving, just know that you’ll just need to leave your car at the one big lot in the city.

Taking the Train from Milan to Venice

This is your best option for getting from Milan to Venice. There’s a train departing from Milano Centrale for Venice just about every hour, and the trip takes between 2.5-3.5 hours. Although most of the trains will stop along the way at cities like Verona, Vicenza, and Padova, I have yet to find a route that requires you to get off at any point and change trains. You just get to sit tight and wait for your Venice stop.

A 2nd class train ticket will cost you between €14-26 depending on how fast your train is, and a 1st class ticket will range from €21-36. The slowest trains don’t usually require a reservation in addition to your ticket, but the ES and EC trains do. If you’re unsure, ask at the ticket counter. And if you’ve already got a rail pass of any kind, that’s your ticket – all you’ll need to find out is if you’ll need a reservation. If you don’t need a reservation, just make sure your railpass is validated, and hop on your train.

It’s important to note here that there are two train stations with the name “Venezia” in them – you want the one called “Venezia Santa Lucia.” If you get off at “Venezia Mestre” you’re still on the mainland. You don’t want that.

>> Learn more about taking the train from Milan to Venice

Flying from Milan to Venice

Even with the plethora of low-cost airlines in Europe, flying from Milan to Venice is going to be cost-prohibitive for most travelers – not to mention a logistical hassle, since you’d have to get from central Milan out to Malpensa for many of the flights, which is almost an hour-long trip in the wrong direction from Venice! The flight itself is around four hours, so you’re talking about a 4-5 hour journey – longer than the train ride.

If the time issue doesn’t discourage you, perhaps the cost will. When I checked prices for this post, they ranged from €250-350 for a round-trip flight, and €130-150 for a one-way flight. So even though I really love the Marco Polo Airport in Venice, I’d recommend you avoid flying from Milan.

Taking the Bus from Milan to Venice 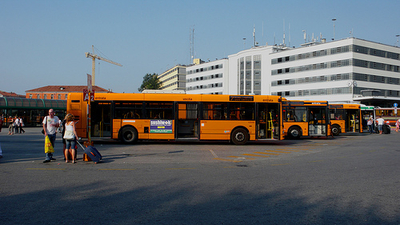 Although Italy lacks a national bus company, each region typically has its own bus company that will get you around to cities and towns within that region – and usually not much beyond that. Because Milan is such a big transportation hub, however, there are buses which cross regional lines. Still, I’m unable to find a single bus that goes all the way to Venice. The closest bus I can find goes to Padova.

So, the short answer to the question, “Can I take a bus from Milan to Venice?” is yes. You can. But you don’t want to. The trip to Padova alone is almost 5 hours, and it only runs three days a week from Milan, once per day. A one-way ticket would cost you at least €22-25 (the prices for bus tickets with this company appear to be based on distance covered, and every 12km over 160km gets an additional €1.50 added on). And at that point, you’re still only in Padova.

In other words, the bus – while available – is a longer trip and, in the end, probably more expensive than just taking the train all the way from Milan to Venice.

Driving from Milan to Venice 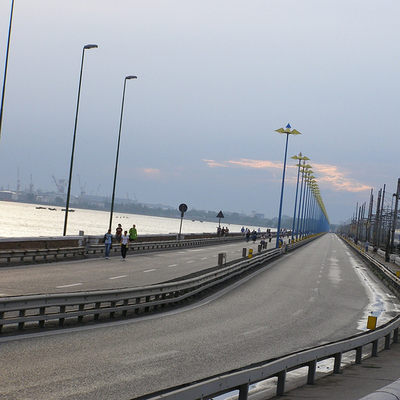 As you might have gathered, I’m a big proponent of taking the train in Italy, and that’s not restricted to destinations like Venice that are blissfully car-free. Milan is full of cars, but it’s also a pain to have a car in such a busy city.

Still, if you’ve got a car and you’re driving your way around the country, you’ll want to get your hands on a really good driving map – I like Michelin maps – and sort out the best route. The A-roads are the biggest, but generally come with tolls, so keep that in mind. Most of the trip between Milan and Venice is on the A4, which eventually even gets the name “Autostrada Padova Venezia.”

After passing Padova, you’ll begin looking for signs for Venezia, and it’s the E70 and then the SR11 which cross the water out from the mainland onto the island. There is one bridge connecting Venice to the mainland, and it’s both a car and rail bridge. Expect delays, especially during peak season. The only car park in Venice is the Piazzale Roma, just across the Grand Canal from the train station. The road will practically lead you there, and there aren’t many places you can get turned around, so don’t worry about driving in circles or getting lost.

In fact, save the pleasure of getting lost in Venice for when you’ve left your car in the parking lot and you’re walking around the most beautiful city on earth.

>> But do your research on driving laws in Italy before you get in the car!

Here are some posts I’ve written which may be handy: