Getting from Rome to the Cinque Terre (and Vice Versa) 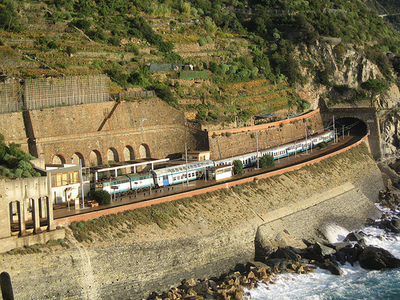 According to statistics, most international travelers enter Italy by way of Rome. I understand this from a “Rome has a gigantic international airport” standpoint, but after a few days in Rome I can also understand wanting to escape the big city for some place a bit quieter. And even if the Cinque Terre is a helluva lot more crowded these days than it used to be, it’s still a helluva lot quieter than Rome. So here are your options for getting from Rome to the Cinque Terre.
For a journey as long as the trip to the Cinque Terre from Rome, you basically have two options – take the train, or drive a car. There are some regional buses in Italy, but none that goes from Rome all the way to La Spezia (because that would cover three regions). There are also boats which serve the Cinque Terre, but not from Rome. And although there are technically two options listed here, there’s really only one that makes sense. Driving to the Cinque Terre, as you’ll see below, is something you’ll want to avoid at all costs.

Taking the Train from Rome to the Cinque Terre

This is, by far, the best and easiest way to get to the Cinque Terre from Rome – or from anywhere else, for that matter. Each of the five towns has its own little train station, and the rail line connecting them cuts through the rocky cliffs in a relatively straight line (which is more than can be said for the roads).
Because La Spezia lies just inland from the Cinque Terre, between Rome and the five villages, pretty much any train you’re on will stop in La Spezia. Not every train that stops at La Spezia and at Monterosso (the northernmost of the Cinque Terre towns) stops at all five towns, however, so if you’re not planning to get off in Monterosso be sure to double-check that the train will stop at your desired destination. If it won’t, you’ll need to get off and catch the next slow train – the “regional” train – that stop at all five. And, of course, if you accidentally get all the way to Monterosso and need to back-track, that’s easy – just hop on the next slow train heading south!
The train from Rome to the Cinque Terre takes on average about 4-4.5 hours, depending on the slow trains. The fastest trains will get you to the Cinque Terre from Rome in about 3.5 hours, but they’re also the most expensive. The slowest – and cheapest – train will take almost 5.5 hours total. And regardless of which train you take from Rome to La Spezia, you’ll be on the same slow train to get from there to any other town in the Cinque Terre. 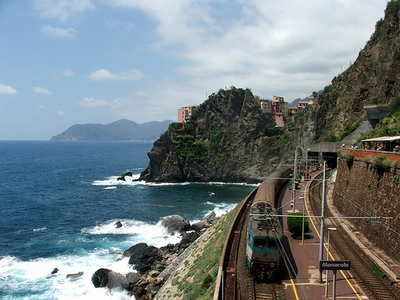 A 2nd-class one-way train ticket from Rome to Monterosso on the fastest train, for instance, will cost just over €41, and you’ll still need to buy a reservation for the trip from Rome to La Spezia. A 1st class ticket will cost almost €63. On the slowest train, a 2nd class ticket will cost just under €35, a 1st class ticket will cost around €46, and once again you’ll be buying a reservation as well for the Rome-La Spezia part of the journey.
There are a couple other train options, but the price range is all roughly the same as what I’ve mentioned here. Remember that if you have a Railpass of any kind that acts as your ticket, so you won’t need to buy a train ticket – but for the parts of the trip that require reservations (i.e., the Rome-La Spezia leg), you’ll still need to buy a reservation to go with your Railpass. Just bring your pass to the ticket counter so they know what you’ve already got and can tell you what else you need to buy.

Driving from Rome to the Cinque Terre 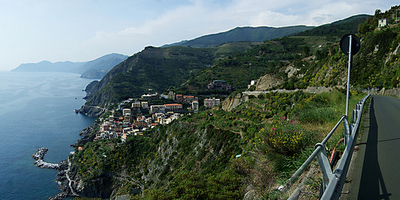 Honestly, if you can avoid driving to the Cinque Terre, you should. For one thing, the roads get narrow, they twist perilously along the coast, and – oh, by the way – you’re sharing said tiny and twisting roads with cars and even buses going in the other direction. The only motorized vehicle that doesn’t seem completely ridiculous to me on those roads is a scooter, but personally I’d stick with the train.
If you absolutely must drive to the Cinque Terre from Rome, however, some information that should help you is below. And don’t forget to read all about the rules of driving in Italy, too.
The journey is nearly 300 miles, primarily on motorways (which also have tolls). If you get lucky and don’t hit traffic, the trip is in the 4.5-5 hour range. You’ll want to take the A-12 Autostrada in the direction of Livorno-Genova and take the Carrodano-Levanto exit. Then follow signs to the Cinque Terre (which may be labeled as Monterosso until you get close enough to distinguish between directions to the five towns).
I’m going to take another moment here to emphasize the windy-ness of the roads you’ll be on once you get off the Autostrada. When I made the trip to the Cinque Terre by car, I made the mistake of looking at the distance on the map and thinking, “Oh, that’ll be quick.” What I didn’t count on was how slow every vehicle on those roads has to go in order to remain, well, on the roads. The trip took almost three times as long as it seemed like it should have.
Once you get to your Cinque Terre destination, your next challenge is where you’re going to park. None of the towns allow cars into the town center – there simply isn’t room – but each one has a parking area at the town entrance. Four of the five towns run regular shuttle buses from the parking areas into the town center (Corniglia is the only one that doesn’t). Expect to pay around €20 per day to park, and then another €1-2 for the shuttle into town. 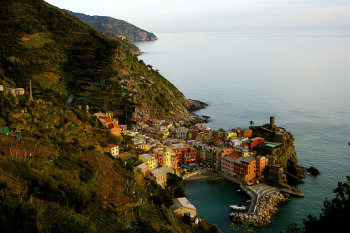 Here are some of the articles and information tidbits I think will help you plan your Cinque Terre trip:

I found this fun video someone took while driving in the Cinque Terre… And while it doesn’t really make my point about how bad of an idea it is to bring a car into this part of the world, I’m sharing it with you anyway. Because even if this guy got lucky and was on the roads when no one else was, it doesn’t change the fact that the roads are tiny and twisting. Just trust me, don’t drive there. Watch the video, but don’t do it yourself.