How to Get from Rome to Naples (and Vice Versa) 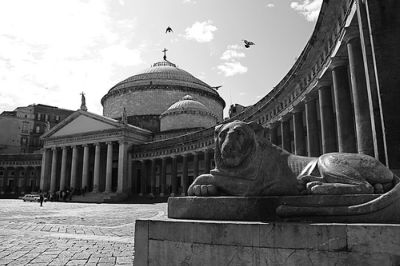 Whether you’re planning a quick stop in Naples on your way to the Amalfi Coast, using it as a base from which to take a day trip to Pompeii, or looking forward to spending a few days in this gritty Italian city, first you’ll have to get to Naples. For many travelers, that means figuring out how to get to Naples from Rome – which is exactly the trip we’re going to explore in this article.
As with just about any other journey between two points in Italy, there are several ways you could make the trip. I have a favorite transportation method, and that method may not be ideal for your particular travel needs. So in this article I’ll go over all your major options for getting from Rome to Naples, so you can pick the one that suits you best.
Keep in mind that although this article is geared primarily toward people starting in Rome and ending up in Naples, if you’re doing the trip in reverse – getting from Naples to Rome – the basics are going to be the same. The names of the train stations you’ll be passing through, the cost of a ticket and reservation, rough drive-times, etc. – all that will be the same no matter which way you’re going. You’ll just need to confirm schedules going either way.

Taking the Train from Rome to Naples

ShowBookingWidget();
To me, the easiest way to connect the Italian capital city with what’s often called the southern Italian capital is to take the train. Taking the train means you don’t have to do any navigating, or park a car, or any number of other hassles – and the new high-speed train lines that run between Rome and Naples make the trip so fast these days that it’s a convenient and quick option.
The fastest trains from Rome to Naples are the Alta Velocita trains, which make the trip in about 1 hour 15 minutes one-way. Not surprisingly, these trains are the most expensive – a first class ticket is around €60 and a second class ticket is around €44. Slower trains on the Rome-Naples route can take from 2-3 hours, but they’re much cheaper, so if budget is more of a concern than time you can pick one of the slower trains. The slower trains cost as little as €27 for a first class ticket and €20 for a second class ticket.
The Rome-Naples trains depart from Rome’s Termini Station and arrive into Naples’ Centrale Station. Depending on the time of day, there may be as many as five trains leaving Rome and headed for Naples every hour (not all of them are the high-speed trains, however).
It’s important to note that with some of the faster trains – including the Alta Velocita trains – you’ll need to buy a reservation in addition to your ticket. So although €44 for a one-way second class ticket may be within your budget, be sure to find out how much a reservation will cost on top of that €44 before you commit to the high-speed train. Some of the slower trains don’t require reservations in addition to tickets, so they’re an even better deal. If you already have an Italy rail pass, that acts as your ticket in any case – so the most you’d need to purchase in addition to that would be a reservation if it was required.
>> Learn more about taking the train from Rome to Naples

Driving from Rome to Naples 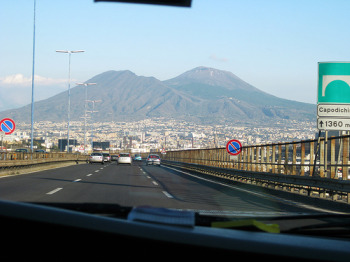 Many people who make their way to Naples do so because it’s a good stop on the way to a longer stay in one of the towns along the beautiful Amalfi Coast. Not only that, there’s a significant percentage of people for whom an opportunity to drive along the Amalfi Coast is not to be missed. It’s a stunning drive, partly for the views and partly for how it’ll occasionally shock you into wondering how such a narrow and winding road can possibly accommodate so many motor vehicles. Even if you can’t wait to get behind the wheel and work your way down the coast, however, you might want to wait until you get to Naples to pick up a car.
Driving in Italy can be great fun, and when you’re talking about driving through some of the country’s most congested cities it can be anything but. If you’re not coming from central Rome and you’re staying outside Naples (rather than in the city center), driving from city to city might not be an issue. But if your route will take you through either city center I’d recommend against driving just to avoid the headaches of navigating unfamiliar cities where the local drivers are impatient, not to mention the hassle and expense of parking.
Still have your heart set on driving down the Amalfi Coast? No problem – when you’re done with your time in Naples, arrange to pick up your rental car at (for instance) the Naples airport or another location outside the city center, and off you go.
If you already have a car and you’ll be driving from Rome to Naples, I recommend looking up the specific addresses you’ll be traveling between on the Via Michelin site to get specific driving directions. Generally speaking, the drive will take at least 2.5 hours.

Flying from Rome to Naples 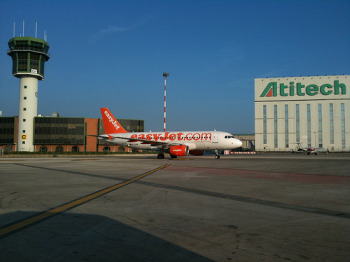 Both Rome and Naples have international airports serving them – Rome, in fact, has two – and you can fly from Rome to Naples. Is flying from Rome to Naples the best option for your trip? It might look like the ideal choice (especially if you’re crunched for time), but you want to make sure you’re taking a few things into account. Here’s what you need to know.
Direct flights from Rome’s Fiumicino Airport to Naples’ Capodichino Airport usually take just under 1 hour. Believe it or not, for such a short route, there are flights you can book that aren’t direct and include one stop along the way (in Turin, way up north and out of the way) – these can take more than 3.5-4 hours, and I don’t recommend them. In both cases, the airline you’ll be looking at for flights is Alitalia.
The direct flights can cost less than €100 for a one-way ticket, so may be comparable with a first class ticket plus reservation on the high-speed trains when it comes to cost and time spent in transit. But because both airports are a ways outside the city centers, you’ll need to take into account the cost of getting from the airport into the city in both cases (not to mention how much time it will take). Plus there’s also the modern requirement of getting to the airport at least an hour before your flight and (if you’ve checked a bag) waiting at the other end for your luggage. Add all of that time up and your less-than-one-hour flight is suddenly a several-hours journey.

Taking the Bus from Rome to Naples 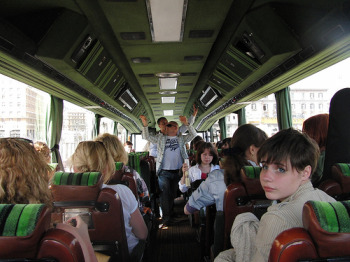 As train travel in Italy (and elsewhere in Europe) gets faster and sometimes, therefore, more expensive, serious budget travelers look for other options for getting around in Europe that cost less than the high-speed trains. There are a couple kinds of trips in Italy where taking the bus can be a great money-saving choice – one of those trips is if you’re traveling between two cities within one Italian region, and the other is if you’re traveling from a city in Italy to a city in another country in Europe. Unfortunately, neither of those describes the trip between Rome and Naples.
Rome is in the Lazio region and Naples is in the Campania region, so there isn’t a bus network that connects the two cities. There’s the well-known Eurolines bus network that connects big cities in Europe – taking you from Amsterdam to Paris to Rome – but they don’t do short routes within any one country.
In other words, although taking the bus in Italy can sometimes be a good (and cheap) way to get around – getting from Florence to Siena, for instance, is best done by bus – for the trip from Rome to Naples the bus isn’t a viable option. If you’re on a strict budget, take one of the slower (cheaper) trains.

And now that you’re in Naples… 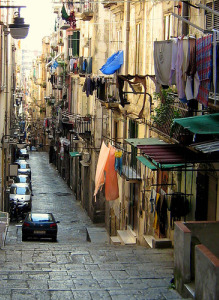 I love Naples, but it’s not necessarily the kind of place you’d want to go without doing a little research. Here are some articles that should help you plan your stay in Naples: