How to Get from Rome to Pisa (& vice versa) 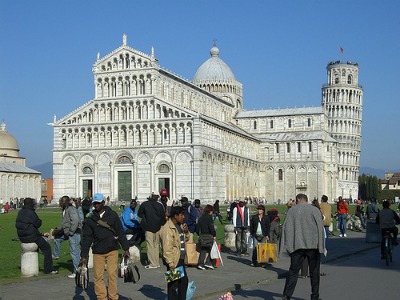 In an ideal world, we’d have all the time we wanted to travel and not feel rushed on vacation to hit one world famous attraction after another. In reality, however, most of us travel at least somewhat according to checklists – and many of the major sites on an Italy checklist can be found in Rome. But you’ll have to venture outside the capital city to find one of the most popular structures in the entire country – the leaning tower of Pisa.
While a visit to see (and climb) Pisa’s leaning tower is better done from a home base of nearby Florence, Pisa can be done as a day trip (albeit a long one) from Rome. Additionally, although most people stay in Florence and only see Pisa as a day trip, Pisa can be an ideal place to use as a base from which to explore Tuscany. Whatever your reasons for needing to get from Rome directly to Pisa, here’s the information you’ll need.
Note that you can also use this information to get from Pisa to Rome at the end of your day trip, or if you’re traveling in the other direction on your itinerary. The ticket prices and trip durations will be the same, you’ll just need to look up departure times.

Taking the Train from Rome to Pisa

ShowBookingWidget();
You have a few options for trains between Rome and Pisa, from the high-speed AV trains that take 2.5-3 hours one-way to the slower trains that take 4 hours one-way. Many of the trains (including all of the AV trains) go from Rome to Florence, and then you’ll change trains to get from Florence to Pisa. I generally recommend opting for the fastest train your budget will allow, since most of us don’t have gobs of time to spare – and if you’re doing Pisa as a day trip from Rome, a fast train is even more important.
If you can, take one of the AV trains that makes the trip in 2.5 hours. They leave Rome’s Termini station every couple of hours, and they all require a connection in Florence. A regular 2nd class ticket on these trains is about $75, and these are trains that require reservations. In other words, if you’ve got a rail pass of any kind, that’s your ticket – but you’ll still need to purchase a reservation for a specific seat on a specific train.
If you’re not making Pisa a day trip and you don’t mind leaving a little later in the day, there are ES City trains that take about 2 hours and 50 minutes, require no train changes, and for which you can sometimes find tickets for as little as $25 in 2nd class (this is if you book ahead online). These trains also require reservations.
Remember that if you’re visiting Pisa as a day trip from Rome, it’s important to check the return train schedule before you leave the station in Pisa so you know when to get back to the station for the return leg. Also note that if you’re using a rail pass for this day trip, you’ll get both tickets included on one “travel day” (which is an excellent bargain). You may have to purchase reservations for both legs of the trip, however.

Driving from Rome to Pisa 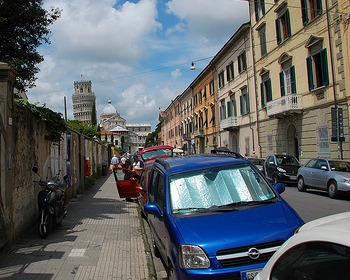 Many trains that connect Rome with Pisa are routed through Florence, and the main highway connecting these cities is as well. Using the Via Michelin site to get rough driving directions, the “recommended” route is to take the A1 northwest to Florence and then west to Pisa. This route is about 365km, most of which is on the highway, and is estimated to take about 3 hours and 45 minutes (barring traffic or other issues).
If you read the information above about taking the train, you’ll note that the train trip is faster in most cases – so if you’re wavering between the two options, that’s definitely a big factor to consider. Also remember that driving and parking in Italy’s major cities (including both Rome and Pisa) can be a hassle if you’re not used to it.
For those of you who are planning lots of day trip excursions into Tuscany from a base in Pisa, a car will be handy – so I’d suggest at least finding a car rental office on the outskirts of Rome for your car pickup (so you don’t have to navigate through Rome’s busy city center) and asking your hotel in Pisa about parking arrangements for when you arrive. It’s also a good idea to get an idea of drive times and directions using Via Michelin (typing in specific addresses) – but don’t rely on that as your only means of navigation. If you can get a GPS unit for your rental car, that’s a great thing to have; and buy a good driving map, too, just in case.

Taking the Bus from Rome to Pisa 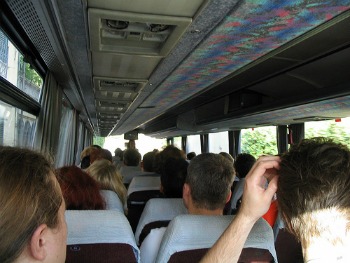 Bus travel within Italy is cheap and do-able if you’re sticking to one region, but as soon as you cross regional borders things can get more complicated. In some cases, there aren’t even buses that connect the city you’re in with the one you want to go to (at least not without a change or two along the way). Getting a bus from Rome to Pisa falls into the complicated category.
There are buses you can find from Rome to a few cities in Tuscany, including Florence and Siena. Then there are buses you can take from Florence and Siena to Pisa. Because these are different bus companies operating these routes, you can’t book one ticket that gets you from Rome to Pisa – you’ll need to book your first leg and then book the second one separately.
There may be others, but the company I found that operate bus service from Rome-Tuscany is SENA Autolinee:

From either of those cities, you can make your way to Pisa – but not always by bus. Florence-Pisa is so well-served by train that there isn’t a bus connecting the two cities (unless it’s from one or the other airport). The TRA-IN bus company serves Siena-Pisa, but again it’s just to Pisa’s airport. So if you get to Florence or Siena by bus from Rome, your best bet is likely to be to take the slow (and cheap) train from there to Pisa.
(Or just take the train to begin with…) 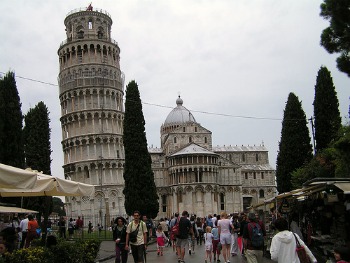 Whether you’re just taking a day trip to Pisa or you’re moving from Rome to Pisa on your itinerary, here are a few more resources to help you better plan your trip.