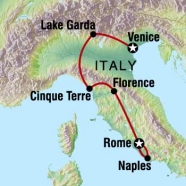 The fine folks at BootsnAll (who host this website) are into lots of travel-related things, including an entire division of the company that puts together package tours to destinations all over the world – it’s called BootsnAll World Adventures. Most of these trips are geared toward adventure travelers who may have once been hardcore backpackers but who have gotten to the point where they’d like someone else to take care of the details now, thank you very much. Because of this focus, BootsnAll World Adventures (BWA for short) doesn’t tend to focus on places like Italy. Their bread and butter is more in places like Africa, Asia and South America.

To their credit, however, they’re trying to branch out and include places like Italy – even though they’re definitely on the beaten path – because, let’s face it, there’s only one Rome on earth, and even most hardcore backpackers will eventually want to see the Colosseum! There’s an Italy tour available through BWA right now, with departure dates stretching from now through November, which I thought I’d take a moment to highlight.

Called “Italy Basix,” this tour lasts 14 days and includes Venice, Lake Garda, the Cinque Terre, Florence, Naples and Rome – in that order – and starts at $1,605 per person (not including airfare). This isn’t the kind of trip where you get booked into 3- or 4-star hotels and shuttled from attraction to attraction in a big air-conditioned bus, though. Instead, the accommodation is in really basic hotels or hostels, some of which aren’t private rooms and don’t have private en suite bathrooms, and transportation is on local trains and buses. Essentially, what you are paying for (aside from the actual costs of things like the hotels and trains) with this tour is the luxury of someone else planning everything for you.

I say the “luxury” of having someone else do the planning because anyone who has planned their own trip from start to finish and served as their own tour guide knows that as fun as it is, it can also be really exhausting. When you book an Italy tour like this, you get someone shepherding you to the right train, navigating directly to the hotel or museum without losing time to wrong turns, and directing you to out-of-the-way local restaurants and shops. All you need to do is follow along and push the shutter on your camera.

In many respects, I think this particular Italy tour is nice – it’s a good mix of the things every Italy traveler sees and a few things that many people miss, and the itinerary allows for lots of free time when you can do what you want and you aren’t forced to follow the group everywhere like so many sheep. I’m pleased that the itinerary calls for an overnight in Venice, because too many people end up hating the city (which I, as someone who loves it, find terribly sad) because they only see it during the crowded midday. And although the Cinque Terre is really over-touristed these days, most tours that I’ve seen head straight to the towns of Vernazza or Monterosso al Mare, so I like that this one makes Riomaggiore its homebase instead.

However, I’m not someone who doesn’t nitpick, so if I ran the world (or at least this tour) I’d probably change a few things – first among them being the name of the tour itself. “Italy Basix?” Really? With an “x” in it? I feel like that kind of purposeful mispelling is reserved for the people who name skateboards or chewing gum, and on a broader level I’m not even sure it really represents what this trip is offering. Yes, the “basix” are there – Venice, Florence, Rome – but there are a few fun extras that most tourists (especially first-time tourists) to Italy don’t even consider including.

In terms of the itinerary, while I really like that it’s sort of encouraging you to fly into Venice and out of Rome (rather than wasting a travel day getting back up to Venice to fly out of the same airport), and I understand that the cities are in the order they’re in because Rome is the departure city, it does seem a little weird to make such a long train journey from Florence down to Naples only to head North to Rome a few days later. I get it, it just looks odd to me. Instead of adding another city to an already-heavy itinerary, however, to break up the trip between Florence and Naples, I might substitute one of the cities listed. I might also swap some of the days around so that there’s more than one overnight in Florence (a travesty!).

But the bottom line is that while I might think this trip is trying to accomplish too much in one short two-week time period, and I might construct a different kind of trip (not to mention travel differently myself given the same amount of time), this Italy tour is a helluva lot better than the big bus atrocities that herd air-conditioned tourists from museum to Roman ruin. This trip will allow you to see the same sights, and it gives you the freedom to do your own thing quite often as well – essentially, this trip treats you like an adult, not like a toddler who needs to wear the same hat or t-shirt as everyone else in your group lest you get lost in the big, bad city. That kind of thing seems to me to be overly condescending, and wholly unnecessary. Italy isn’t that scary. You don’t need a chaperone, you need a guide. And that’s what the Italy Basix tour provides.

If you want more information about this Italy trip, check out the itinerary, details and departure dates. Other Italy trips are available, too, if you’d like to see your other options.