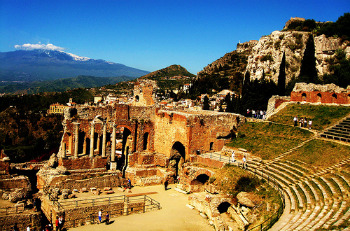 There have been songs written about “April in Paris,” but it’s easy to argue that April in Italy is just as worthy of a musical tribute. This is a month that’s still firmly in Italy’s spring shoulder season, but it often also includes some of the last shoulder season perks travelers will see in Italy until the fall returns again.

Weather in April in Italy

There may be a saying about “April showers bringing May flowers,” but April in Italy is more often marked by sun than by rain. Like any shoulder season month, of course, April weather is more unpredictable overall than the summer or the winter – but you’re far more likely to exprience mild temperatures and sun instead of rain.

As is always the case in Italy, the temperatures rise as you head south. In April, this can mean that parts of northern Italy are still getting a bit of rain and cooler nights when it’s warm enough in southern Italy to have the locals worrying aloud about how hot the summer will get.

April weather, by and large, isn’t usually warm enough to warrant lots of beach time, but it’s usually sunny enough that you’ll be happy you packed your sunglasses and you’ll get plenty of use out of your walking shoes. Just don’t be surprised if a freak rainstorm requires an unexpected purchase of a little umbrella, or a moment taking refuge inside a bar for a quick espresso.

Temperatures in April vary depending on where you are in Italy, but as a general rule of thumb these are the ranges:

Holidays in April in Italy

Easter doesn’t fall on the same day each year, so it sometimes occurs in March – but it’s often in April, and since it’s one of the biggest holidays on the Italian calendar it’s important to know whether it’s happening during your planned visit. It can be a great deal of fun to see how Italy celebrates Easter, but if you’re trying to get from place to place during Easter weekend you may experience more than a little frustration.

April 25th is another major holiday on the Italian calendar – it’s Liberation Day, and there are often parades and demonstrations in cities and towns throughout the country. On the other end of the seriousness spectrum, April Fool’s Day in Italy may not be as big of a deal as it can be in some other countries, but it’s definitely recognized by some.

Even if your travel plans don’t coincide with Easter or Liberation Day, it’s a good idea to check the local calendar of events for the various places you’ll be visiting in April – you never know when a town’s patron saint’s special celebration will occur, or any number of other local festivals occur. For instance, April 25th is Saint Mark’s feast day, and since he’s Venice’s patron saint that’s a big celebration in Venice. Additionally, April 21st is considered to be the birthday of the founding of Rome, so there are often special concerts and exhibits in the capital on that day.

>> Check my Italian holidays page to find out some of the things going on this April in Italy.

Why go to Italy in April?

As mentioned, April is still very much in Italy’s spring shoulder season – and shoulder seasons are widely thought of by frequent travelers to be the best time to visit almost any destination. The combination of relatively good weather and relatively low prices makes them appealing, and April in Italy often delivers on both of those fronts.

Sure, you’ll pay less on a plane ticket to Italy if you visit in January or February, and your hotel in Italy may cost more in April than in March, but the prices are still lower in April than the highs they’ll reach during the summer. Not only that, if you’re paying attention far enough in advance you can often score winter-rate travel deals to Italy for dates in April simply by booking your trip a few months in advance.

Visiting Italy during the winter is appealing to anyone who likes avoiding peak crowd levels, but even though there are more tourists in Italy in April than in January the number of visitors is still smaller than it will be in the summer.

The unpredictable weather in Italy in April is one of the main drawbacks to an April trip, but travelers who are able to keep their plans flexible and switch from a day spent visiting the outdoor ruins of the Roman Forum and Colosseum to a day spent enjoying the indoor attractions of the Vatican Museums and St. Peter’s Basilica are well-suited to shoulder season trips in general.

Keep in mind that it’s important to find out when Easter is occuring, because traveling during Easter weekend can be troublesome with trains and buses running on a slower holiday schedule. Also note that in some places the Easter celebrations create a minor spike in the cost of hotel rooms – they don’t tend to be as high as the cost can be in the summer, but they’re often higher than the weekends directly before or after Easter weekend. Liberation Day also means closures at many attractions and shops.