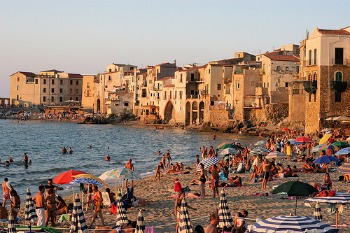 The sad statistic about how little vacation time Americans get is regularly trotted out, so next time you hear it you can add to the misery by realizing that Italy in August is one big vacation for many Italians.

Weather in August in Italy

August is when quite a bit of Italy hits its highest point on the thermometer – and this is especially true in southern Italy. While some of the north reaches its peak temperature-wise in July, in the south the mercury keeps climbing well into August, so it’s a particularly good thing that so much of the south is known for its beach resorts.
As mentioned, August is often when Italians take their month-long holidays – called “ferie” – and anyone who has the means escapes the heat and humidity of the cities for cooler climes like the mountains, countryside, and beach. In fact, visitors to Italian cities in August may sometimes feel like they’re seeing more tourists than Italians – and some cases that’s true.
Air conditioning isn’t a standard fixture in buildings throughout Italy (some Italians still believe that cool air moving over them while they sleep will make them very sick), so visitors to Italy in August would be smart to confirm with their hotel or hostel that the rooms are air conditioned. This is especially true because high temperatures in Italy often go hand in hand with high humidity, making a cool refuge even more important.
Temperatures in August vary depending on where you are in Italy, but as a general rule of thumb these are the ranges:

Holidays in August in Italy

As mentioned, August is a month-long holiday for many Italians – but the biggest holiday of the month is Ferragosto, or Assumption Day, on August 15th. It’s a national holiday marked by most people in the country, and is often celebrated by fireworks displays as well as local celebrations throughout the country. Since so many Italians are on vacation in August, you may not notice the additional closures on Ferragosto, but even shops and attractions that are open in August will generally close up shop on August 15th for the holiday.
August is also when the second running of the Palio horse race in Siena, on August 16th, and the Verona Opera Festival is still going during August. Despite the heat, there are other local festivals and events that take place in August, so be sure to check the calendar of events for the various places you’ll be during your trip to find out what’s going on when you’ll be in town.
>> Check my festivals in Italy page to find out some of the things going on this August in Italy.

Why go to Italy in August?

The stories of high temperatures and Italians fleeing the cities for the beach may make you question your sanity in planning a trip to Italy in August, but there’s one very good reason to go to Italy in August – the prices are, for the summer at least, not as high.
Summer travel in Italy is, overall, the most expensive season in which to visit – but because both Italians and European tourists tend to avoid the cities in August that often means the prices on hotels in Italy and hostels in Italy drop a bit in August as compared to June or July. Of course, if the hotels and hostels you’re looking at are in beach towns, those prices will be at their peak – and the cost of an airline ticket to Italy doesn’t typically go down much in August as compared to July or September.
As is the case with July, if you don’t deal well with heat, August may not be the best time to be in Italy. Budget travelers who are sticking to the cities can sometimes find bargains in August, but the popular beaches are going to be extremely crowded (with Italians more often than foreigners) as well as expensive.
Of course, if it’s a choice between going to Italy in August and not going at all? I think you know where I’d come down on that argument.
photo by Simon Welsh