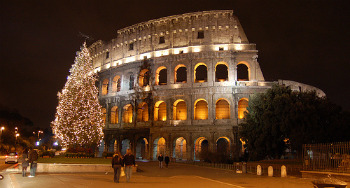 While most tourists dream of visiting Italy during the summer, there are some who would visit at no other time than in December – and it’s not just because of the Christmas holiday, either.

Weather in December in Italy

There’s no denying that Italy in December is cold – there’s snow in the mountains along the northern border of the country and in the mountain ranges that run down the length of the peninsula, and there’s even sometimes snow in the cities that aren’t up in the mountains. Where there isn’t snow, there tends to be rain, and the temperatures have usually dropped quite a bit from November.

As is almost always the case, southern Italy remains warmer than northern Italy even in the country’s coldest months – but that doesn’t mean December is beach weather in Sicily. The good news is that throughout Italy, there are lots of reasons to duck into bars and cafes for a little something to warm yourself up with – in addition to the usual quick espresso you can get year-round, winter brings out the Vin Brule, Italy’s version of hot mulled wine. It’s especially common in northern or mountain towns.

December isn’t the time to plan hiking trips through Tuscany, but it is the time to plan the ski season’s first trips to the slopes. When the ski resorts in Italy really get going depends a bit on the snowfall that year, but skiers may want to check with the ski areas nearby during a December visit. Also note that many ski resort towns are home to natural hot springs and spas – and you don’t have to spend a day skiing to enjoy a restorative dip in a hot spring on a cold December day.

Temperatures in December vary depending on where you are in Italy, but as a general rule of thumb these are the ranges:

Holidays in December in Italy

The biggest holiday during December, and the one around which some travelers plan their trips, is Christmas. It’s only fitting, with Italy being home to the Vatican, that Rome becomes a focus for so many people during the Christmas season – and Christmas (Natale in Italian) is an important national holiday throughout Italy. The more important date on the calendar during the winter holidays is Epiphany on January 6th, but you can definitely enjoy seeing Italian towns decorated for the Christmas season starting as early as November.

December 8th is another national holiday in Italy, marking the Immaculate Conception, and the day after Christmas is celebrated in Italy as Saint Stephen’s Day (it’s not Boxing Day, as some other countries celebrate). New Year’s Eve is also a fun time to be in Italy, especially as the Italians are so fond of their fireworks.

There are other holidays and festivals during December, including a wild boar festival in Tuscany and Milan’s patron saint’s feast day. It’s always a good idea to check the local calendar of events for any place you’ll be visiting during your trip, as this allows you to find out what’s going on when you’re in town. Even if all you hope to do is avoid crowded trains or public squares, it’s information that’s good to have.

>> Check my page about holidays and festivals in Italy to find out some of the things going on this December in Italy.

Why go to Italy in December?

For some, the appeal of seeing Italy decked out for Christmas or hearing Christmas mass in one of the many beautiful and historic churches in the country is enough of a reason to plan a December trip. For everyone else, there are still good reasons to go to Italy in December.

Even though the Christmas holidays draw more visitors to Italy than might otherwise be in the country during the low season, the crowds are still overall much smaller than during the high season. If you’re going to Christmas mass at St. Peter’s Basilica, prepare for crowds – but if you’re visiting smaller towns and cities and you just happen to be there around Christmas you’ll find Italy much quieter than it is at its peak tourist season.

As far as the expense of an Italy trip goes, December is a mixed bag. Early in the month can be a very budget-friendly time to visit – the country is in its low season, and the cost of air tickets to Italy and hotels in Italy fall as a result. As Christmas gets closer, however, hotels and hostels in Italy in particular raise their rates back up a bit because of the increased demand. It’s a bit of an exaggeration to call Christmas a mini-high season in Italy, but there’s definitely an upward spike in the cost of accommodation in the more popular cities.

The primary drawback to visiting Italy in December is the weather. It’s cold and often wet, and that’s not exactly conducive to strolling through medieval cobbled streets or slowly exploring the ruins of Pompeii. For anyone who’s on a budget and who doesn’t mind adapting an Italy itinerary as the weather changes, however, December can be a good month to visit.

Keep in mind that although most of Italy is in its low season in December, its ski resorts are just beginning their high season – so if you’re thinking about a ski vacation in December in Italy, remember that the prices will be raised accordingly and you’ll need to book in advance to get the best deals on accommodation.