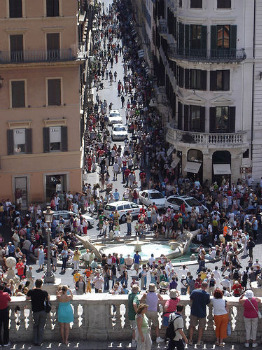 Summertime in Italy can be glorious, so it’s no wonder that in the month of July in Italy it feels like the country is absolutely overrun with every last tourist on earth – despite the higher cost and higher temperatures.

Weather in July in Italy

July weather in Italy is hot from the top of the boot to the toe – there’s no getting around it. Temperatures typically go up as you go south in Italy year-round, but July is a bit of an aberration in that regard – for some reason, July is often the hottest month of the year in northern Italy. Now, that’s not to say that it won’t be hotter in southern Italy in July than it is in the north, but the south still has August up its sleeve…
Beaches in Italy get more and more crowded starting in June (and sometimes May), and by July they’re packed every weekend and during many weeks with both locals and foreigners. Italians are likely to be getting out of the hot cities every chance they get, taking advantage of any long weekend (or even short weekends) to spend a few days in the mountains, the countryside, or on the coast – so you may be competing with not just foreign tourists but also Italians for hotel space and seats on trains.
With the high heat of July also comes humidity, making the heat more uncomfortable overall. Keep in mind that while many hotels these days do have air conditioning, it remains more of a luxury than a standard amenity in cheaper accommodation and especially in Italian homes. In other words, it’s a good thing to confirm whether your hotel or hostel has air conditioning for a July visit.
Temperatures in July vary depending on where you are in Italy, but as a general rule of thumb these are the ranges:

Holidays in July in Italy

While there aren’t any nationwide holidays on the calendar in July, there’s a very famous local festival that occurs each July 2nd – it’s the first running of the Palio in Siena, the city’s medieval horse race.
There are other local festivals and events going on in July throughout Italy, including the Verona Opera Festival and Saint Rosalia’s feast day in Palermo. Regardless of where you’re traveling in Italy in July, check with the local tourism office to find out what’s on their calendar of events. It’s good to know whether you’ll have the opportunity to see a town honor its patron saint, or whether you’ll need to reschedule a visit to a particular cathedral because there’s a local celebration going on inside.
>> Check my holidays in Italy page to find out some of the things going on this July in Italy.

Why go to Italy in July?

With the high cost associated with a July visit to Italy, not to mention the thicker crowds, it’s easy to see why some people avoid Italy during this month.
Anyone on a budget will see their vacation funds eaten up quickly by the cost of Italy airfare, hotels in Italy, and even the normally-cheap hostels in Italy during July. The cost of an Italian gelato may not go up in July, but you’ll have fewer euro leftover to spend on the sweet treat.
The higher number of visitors in Italy during July means longer lines to get into things like the Uffizi and the Vatican Museums, and even some less-popular sights seem overstuffed with tourists. Not only that, the higher temperatures mean waiting in those lines – always outdoors – can get quite uncomfortable.
Of course, there’s a reason why so many people head for Italy in July, and that’s the weather. What may be too hot for some tastes is ideal beach weather for others – as Italy’s packed beaches are a testament to. And since the summer is often the only time families can all take vacation time together, it’s not likely that tourism numbers for July will drop anytime soon.
Those on a budget and those who don’t deal well with heat or crowds would be smart to avoid Italy in July, but those who are making a beeline for the beach or going hiking high in the Dolomites will find July to be just about ideal.
photo by ryarwood