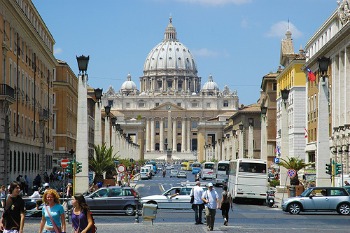 June in Italy is the peak of the tourist season, when crowd numbers and prices are at their highest point. The temperature will climb later in the summer, but throughout Italy it’s plenty warm already in June.

Weather in June in Italy

Although the weather in May in recent years has felt like summer, the high summer season doesn’t technically start until June – and the word “high” applies to the temperature in June, too.
No matter what time of year you’re talking about, the mercury typically rises as you head south in Italy. In June, that means that if it’s hot in northern Italy then it’s even hotter in the south. June isn’t quite the time when Italians with the means to do so abandon the cities for the cooler mountains or beaches, but it’s definitely common for locals to take off for weekends in the countryside more often starting in June.
If you hadn’t already been taking advantage of the beach-friendly weather of May, then you will be in June. This is when beach resorts up and down both coasts (and around all of Italy’s major islands) start to get crowded with Italians and foreigners alike.
It’s worth noting that in many cases, humidity comes along with the higher temperatures throughout Italy. High humidity can make an otherwise-reasonable 85°F feel more uncomfortable, especially when you’re spending a lot of time outdoors. Even if you don’t think you’re susceptible to problems with hot weather, you may want to confirm that your hotel has air conditioning just in case.
Temperatures in June vary depending on where you are in Italy, but as a general rule of thumb these are the ranges:

>> Be sure to check a current weather forecast for Italy before you leave home, as the weather can change. Check my information about Italian weather for seasonal temperature and rainfall averages in a few Italian cities.

Holidays in June in Italy

The main holiday that takes place in June in Italy is Republic Day, or Festa della Repubblica on June 2nd. It’s a national holiday throughout the country, honoring the founding of the republic of Italy, and is usually marked by parades and fireworks (especially in bigger cities). Many things will be closed on June 2nd, even including major attractions.
June marks the beginning of the summer-long opera festival that takes place in the Roman amphitheatre in Verona, which can be a treat even if you’re not a huge fan of opera. There are also other festivals and celebrations that occur in June throughout Italy, so it’s always worth checking the calendar of events for any town or city that you’ll be visiting during your trip. Pay special attention to any saint’s days – every place has a patron saint, and when that saint has his or her feast day it’s a very important (albeit localized) holiday.
>> Check my list of holidays in Italy to find out some of the things going on this June in Italy.

Why go to Italy in June?

The crowds that fill Italy’s most popular cities (and many more besides) are enough to keep some travelers away in June, and it’s easy to understand why.
The influx of visitors means higher prices on everything – including airfare to Italy, hotels in Italy, Italy tours – even the cheap hostels in Italy don’t seem so cheap come summer. Not only that, it’s the sheer number of people trying to get in to see the same attractions that causes those notoriously long lines outside things like the Vatican Museum or the Uffizi.
Still, there’s a reason why so many people visit Italy in June, and it’s also easy to figure out – the weather is often outstanding. There’s nothing like seeing Tuscany’s rolling hills, still green from spring rains, glowing on a summer afternoon – or the way the white marble Duomo in Milan seems to be lit from within on a bright day. And if beaches are your thing, it’s tough to beat spending a holiday on an Italian beach in June.
Budget travelers will have trouble making their money last on a June trip to Italy – but if budget isn’t your primary concern (and especially if summer is the only time you can get the whole family together for an Italy trip), then there are plenty of things to love about traveling to Italy in June. Just remember that higher demand means you’ve got to be a smarter traveler – do your homework in advance so as not to pay a fortune for your vacation or miss out on hotels in the prime locations.
photo by Elliott P.