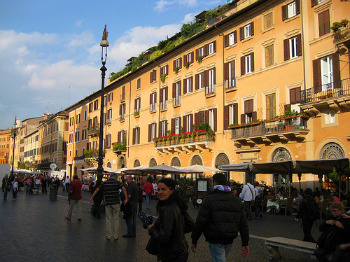 Italy’s “shoulder seasons” have grown shorter as its high season has expanded, but October is still generally considered the start of the fall shoulder season in Italy. October remains, however, quite popular with some visitors, so don’t expect prices and crowd levels to drop as quickly as they went up back in May.

Weather in October in Italy

You’ll find that the average temperature drops quite a bit from September to October (in some places by around 10 degrees F), so this is the month that really feels like autumn even if September was still summerlike. Rain is also more prevalent in October, although you can sometimes still enjoy sunny and warm days followed by cool nights.

It may still be warm enough to spend some time at the beach during October, especially early in the month, but beach weather is far less reliable in October – if lying on the beach is your main goal for an Italy visit, then October isn’t the month to go.

The temperature in October is generally mild enough that spending lots of time exploring outdoor attractions is enjoyable, and you won’t feel like you need to take breaks from oppressive heat. Of course, it’s not unheard of for it to rain more often than not throughout the month – so this is one of those months when you may get equal use out of your sunglasses and umbrella.

Temperatures in October vary depending on where you are in Italy, but as a general rule of thumb these are the ranges:

Holidays in October in Italy

Like September, October isn’t a big month for national holidays and festivals – but the calendar is still chock-full of festival fun, especially if you’re even remotely interested in food.

October picks up where September left off in terms of harvest- and food-related festivals, including the famous white truffle festival in Alba as well as other truffle festivals in central Italy, but arguably the best-known food festival in October is Perugia’s EuroChocolate. The town is completely packed with chocolate demonstrations, sculptors, and vendors (not to mention all the tourists), and on a warm October day during the festival the very air can smell of cocoa.

Aside from food festivals, there are saints days in October that are important to the towns whose patron saints are being celebrated, and lots of other local and regional festivals and events that can add a unique charm to any vacation in Italy. Be sure to check out the calendar of events for the places you’ll be visiting during your trip to find out what’s going on when you’re in town.

>> Check my Italy holidays & festivals page to find out some of the things going on this October in Italy.

Why go to Italy in October?

Foodies tend to see the immediate appeal of being in Italy during its harvest season, but an October trip isn’t just for food-centric travelers.

Since Italy’s high season lasts longer than just the summer months, it’s a relief to budget travelers when the high season ends and prices start coming back down again – and that usually happens in October. September is a great month to be in Italy, it’s true, but it’s much cheaper to visit if you wait about a month and go in October. Crowd levels begin to drop off in October, as well, although there’s some holdover from September so it’s not like the country empties of tourists as soon as the calendar flips to a new page.

The good news is that you will find better deals on things like airline tickets to Italy, hotels in Italy, and hostels in Italy during October. In some areas where the high season lingers longer into autumn – places like Tuscany and Umbria, to name a couple – you may still see higher rates on accommodation, including agriturismo options, but prices are apt to be lower than they were even a month before.

October’s weather is slightly more unpredictable than September’s, which is part of the reason why it’s a shoulder season month, but that can mean more than just carrying an umbrella in your backpack next to your sunglasses. Stormy weather can mean rough seas, and rough seas can mean boats aren’t running, for instance. Shoulder seasons, in other words, reward the flexible traveler who’s able to adapt an itinerary to fit changing weather circumstances.