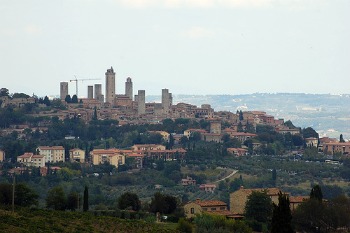 I know I’m not supposed to play favorites, but all things considered, September is – at least so far – my favorite month in which to visit Italy. The reasons are both weather-related and festival-related, as you’ll see below.

Weather in September in Italy

By the end of August, all of Italy has typically hit its peak in terms of temperature – and that means September often includes gloriously hot days followed by cool nights. In the latter half of the month, it’s even starting to feel quite fall-like, and it’s not unheard of for there to be brief rainstorms (complete with thunder and lightning) during September.

Whereas August was vacation month for many Italians, September is back-to-work and back-to-school month – so it’s business as usual when it comes to open hours for attractions and shops, even though the weather remains summerlike in many places throughout the country. That means foreigners can take advantage of beach weather after the Italians have left Italy’s beach towns.

Temperatures in September don’t generally climb to the uncomfortable peaks of the summer months – more temperate conditions overall make this a fantastic month for outdoor pursuits like hiking or exploring Roman ruins, but the occasional short rainstorm makes an excellent excuse to duck into a museum now and then, too.

September is technically part of the autumn and therefore might be considered part of Italy’s fall shoulder season, but prices tend to remain stuck at high season levels in much of the country – especially popular spots like Tuscany – for the entirety of September. In the south, however, prices will drop faster in September even though the mercury takes longer to fall.

Temperatures in September vary depending on where you are in Italy, but as a general rule of thumb these are the ranges:

>> Be sure to check a current weather forecast for Italy before you leave home, as the weather can change. Check my Italian weather page for seasonal temperature and rainfall averages in a few Italian cities.

Holidays in September in Italy

There aren’t any nationwide holidays in Italy in September, but there are several local festivals and events that are well-known.

Venice’s Regatta Storica is a day of historic boat races through the Grand Canal, and while it’s certainly not put on specifically for tourists it’s great fun to witness if you’re in town. Naples’ patron saint, San Gennaro, has his feast day during September, and there’s usually a week’s worth of celebrations associated with it. The International Film Festival in Venice often begins in late August, but stretches into early September – if you’re into celebrity-watching, then the Venice Lido is the place to be during the festival.

September also marks the beginning of the food festival season in much of Italy, as it coincides with the harvest season. You’ll find the calendar stuffed with festivals celebrating everything from truffles to prosciutto to wine, and it’s not hard to see why that kind of agenda would be popular with foodies and travelers alike.

There are other local events and festivals that take place throughout the country in September, so be sure to check the local tourism office’s calendar of events for any city or town you plan to visit. It can be fun to take part in a local festival, but only if you know it’s happening – getting caught in the middle of something unexpected is sometimes fun and sometimes not-so-fun.

>> Check my holidays in Italy page to find out some of the things going on this September in Italy.

Why go to Italy in September?

You don’t have to be a food-centric traveler to see the appeal of visiting Italy when it’s celebrating its harvest. In this country so famous for its food, being a part of local festivals honoring a local food is a reminder not only of how proud Italians are of their cuisine but also how regional Italian food really is. Not only that, it’s a pretty tasty way to travel.

Besides the food festivals, of course, there are other reasons to love Italy in September. The holdover of some of the August heat coupled with slightly cooler nights make it far more pleasant to be outside – and there’s something about the color of the light in Tuscany in September that’s hard to explain but beautiful to witness.

As mentioned earlier, however, September is still considered part of Italy’s high season in most parts of the country – notably the most popular places tourists visit. That means the high prices of June and July don’t start coming down for good until late September (at the earliest). Some places may begin to drop their rates in early or mid-September, but you’re still going to pay more in September for the big-ticket items for your trip – your Italy airfare and Italy hotels – than you will even a month later.

Despite the fact that a September trip to Italy will cost more than a shoulder season trip would typically cost, this is a month – much like May – when a trip is often worth the extra money you’ll spend on it.