Itinerary for 2 Days in the Cinque Terre

This is part of my perfect Italy itinerary series – it’s the second stop on the tour. If you missed the first one, go back and see what to do with two days in Venice!
If you’re following along on my suggested 2-week Italy itinerary and you’ve arrived on this page, that means you’ve just left the lovely canal city of Venice and you’re ready for the next stop on the tour: the Cinque Terre. This collection of what seem like cobbled-together villages stuck like so many barnacles to the Ligurian cliffs is a must-see stop for many visitors to Italy – especially anyone who’s ever heard of Rick Steves.
Steves has talked about the Cinque Terre for years, and some credit (or blame, depending on who you’re talking to) him for their popularity. But even though the days when the Cinque Terre were off the beaten path are long gone, that doesn’t mean they’re any less beautiful. So here are my suggestions for how to spend two days in the Cinque Terre.
Quick search for hotels in Vernazza & Monterosso, two of the more popular Cinque Terre towns:
Vernazza Hotels:
Monterosso Hotels:
>> Learn more about where to stay in the Cinque Terre, with details about each town and what to expect from accommodation in the area.
>> Find out all your options for getting around in the Cinque Terre and why you shouldn’t bring a car.

Two Days in the Cinque Terre 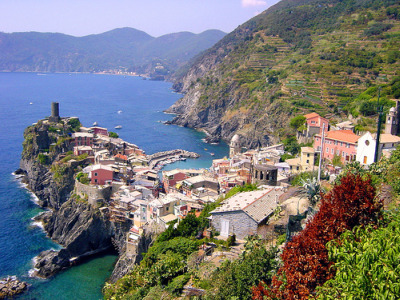 I have a confession to make at the outset. To be perfectly fair, this itinerary doesn’t call for two full days in the Cinque Terre. In fact, it calls for one full day and another part of a day, and two overnights. Assuming you’re following my suggested 2-week itinerary to the letter, this is what you’ll have in these five tiny villages – and if you’ve got more time in Italy than just two weeks, then you can extend your time here to explore even more of the hiking trails and beaches.
The Cinque Terre, while most often described as one place, are actually five villages on the coast of Liguria that are connected by hiking trails, a slow-moving train, and a ridiculously windy road. The villages are, starting from the northernmost one, Monterosso al Mare, Vernazza, Corniglia, Manarola, and Riomaggiore. Monterosso is about 1.5 hours from Genoa by train, and the closest city of any size to the Cinque Terre is La Spezia, just south of Riomaggiore, at about 15 minutes by train.
Thankfully, the Cinque Terre is just remote enough that most people don’t plan on visiting as a day-trip – but some people assume that since it’s a relatively small area they can do it with only one overnight. It’s technically possible to do this, but you miss out on a bit of the quieter elements of these delightful villages if you try to cram too much into 24 hours. By just adding one more night in the Cinque Terre to your itinerary, you get a glimpse of what makes this place so special.

Day One in the Cinque Terre

Whether or not you’re following my 2-week itinerary and coming in from Venice, if you’re coming from further away than Genoa or Florence you’re likely to arrive in the Cinque Terre at least around mid-day (if not a little later). There was a time, even in the high season, when there would be older Italian women on hand greeting most trains with signs declaring they had rooms for rent. Making advance plans wasn’t important, you’d just pick the Italian face you liked best and make yourself at home in your temporary abode.
This is no longer the way things go in the Cinque Terre.
Sure, there may be times when business is slower and you’ll still find a few people bearing “affitacamere” signs (rooms for rent) when you get off your train, but for the most part this little part of Italy is popular enough year-round – and especially during the shoulder and high seasons – that booking in advance is highly recommended. (Also highly recommended? Bringing some kind of mosquito repellent with you.)
So, assuming you’ve booked your room in advance, you’ll arrive in the Cinque Terre town you’ll be staying in for two nights and check in. Unless you’ve gotten an ungodly early start and can get settled before 11am, I’d suggest putting off any of the longer hikes until your second day. There’s one “hike” that’s easy enough that you could do it in sandals before dinner on your first night, however. 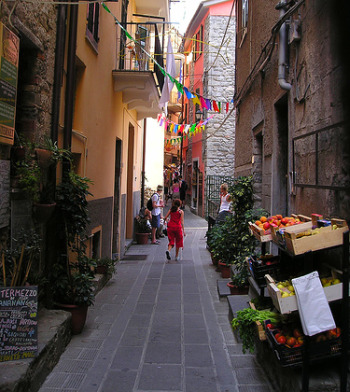 For the most part, I’d recommend spending whatever time you have on your first day just enjoying the rambling streets of the town you’ll be based in, soaking in the views overlooking the water, and figuring out where you’ll eat dinner that night. It’s also a good idea to sort out the necessary Cinque Terre hiking passes for accessing the trails – the Cinque Terre is now a National Park in Italy, so you’ll need a pass to hike from town to town. You can get passes that also include train and boat rides between the villages, which is really convenient and leaves you mobile enough to not feel forced to have dinner in the same village your hotel is in.
In warmer weather, your first afternoon in the Cinque Terre is a perfect excuse to slip into your swimsuit and wash off the morning’s travel sweat with a dip in the sea. The beach in Monterosso (the northernmost town) is the largest and most typical, but there are smaller, rockier, and more inaccessible beaches in some of the other towns. If you’d like to split up the hikes so that you’re not doing all of them in one day, the hike from Riomaggiore (the southernmost town) to Manarola is flat, paved, and even accessible to baby strollers. It’s called the “Via dell’Amore,” or “Lover’s Lane,” so it’s a lovely option for an early evening stroll before dinner.
Have a leisurely dinner (seafood, of course) in one of the many Cinque Terre restaurants that spills out into the streets and squares of these little towns in nice weather, don’t forget to throw a few scraps (when the watier’s not looking) to the town cats that hover underneath the tables, and then later fall asleep with the windows open and the sound of the water (as well as late-night chatter from the restaurants below) filling your room.

Day Two in the Cinque Terre

I know you’re on vacation, and I am the most anti-morning person on earth, but I do recommend getting up bright and early on your second day in the Cinque Terre to get on the trail. If you’re visiting in cooler weather, this isn’t as critical – but in warm weather the hike can get extremely hot and uncomfortable at mid-day and the early afternoon. Even if you’re only planning to hike between a couple of the towns, it’s still a good idea to get up early so you don’t get stuck on a cliffside with no shade for protection from the noon-day sun. Trust me – I speak from experience. 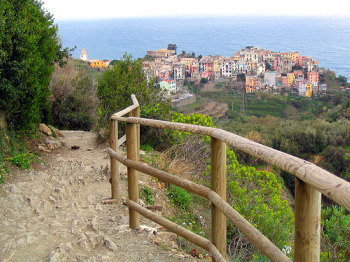 Since you’ve bought your Cinque Terre hiking pass the day before, you’re all set to get hiking as soon as you’ve had your morning coffee and pastry at the nearest corner bar to your hotel or rented room. You’ll find more information about doing the hike between the five villages on my Cinque Terre hiking guide – it also includes information about less-well-known hikes through the area that may tempt you into staying longer, which is never a bad thing in my book.
Whether you’re a hard-core hiker who wants to just keep going once you’ve started or more of a slow-paced walker, I do think it’s well worth it to stop in each town along the hike and poke around to see what’s different about that one. The towns are similar, to be sure, but each one has a unique feel. I like to get something to eat – even if it’s small – in each town, and scope out which one I might want to stay in next time I visit. I also keep my eye out for people selling things along the trail – like homemade olive oil. I have a very soft spot for buying things like that from the people who made them.
Starting the hike early means that even if you’re hiking all four trails connecting the five towns in one day you should be done by around lunchtime. So even if you’ve stopped in each town for a bite to eat, reward yourself post-hike with a feast in another of the Cinque Terre’s many restaurants. Then indulge in an early afternoon glass of Sciacchetrà, the local sweet wine (with a biscotto cookie for dipping), before heading back to your room to get cleaned up.
This leaves you with the rest of the afternoon and evening to relax. Head back to the beach, find a sunny rock from which to read or write or just stare at the sea, explore the towns a bit more fully (using the slow train to get from one to another, thanks to that train-plus-hiking pass you bought), pick up a few souvenirs, or take a nap. Then it’s time for another dinner, more scraps for the cats, and a good night’s rest. You’ll head out the next morning, back to the train station and on to your next stop on your tour of Italy.
>> Following along on my recommended route through Italy? Then that next stop is four days in Florence! Find out how to get from the Cinque Terre to Florence, including a brief stop in Pisa. It’s a great train trip, and by booking train tickets in advance using the box below you can get Trenitalia’s best rates. 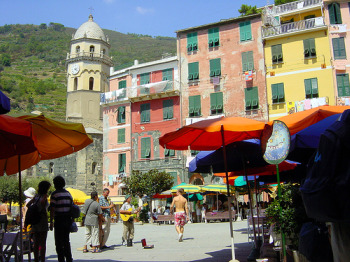 Here’s a bit more information you’ll find handy in planning your trip to the Cinque Terre, regardless of how long you’re spending there.