Things You Should Know About the Amalfi Coast 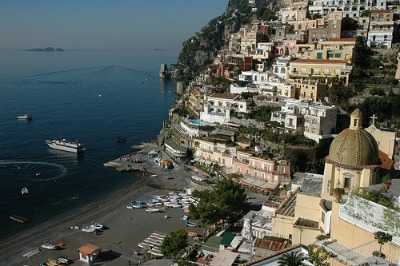 Some places in Italy are so well-publicized that you feel like you know them intimately before you arrive. Even if the first sight of Venice or Rome or the rolling Tuscan hills does take your breath away, that may be because you can’t believe all those pictures you saw weren’t somehow faked – that this place really does exist.
That kind of breath-taking beauty is on the Amalfi Coast, too, along with the hundreds of thousands of photographs out there in the world of this famous stretch of coastline south of Naples. When you step off the bus or the boat, it’s probably just like you imagined it would be – but that doesn’t mean everything on the Amalfi Coast is as you’d expect.
Before an Amalfi Coast vacation, have a look through this list of things you should know about the Amalfi Coast. You might already have read some of this information, but my goal here is to get past all the glowing talk of how spectacular the views are and deliver pointers to help you make your trip a success.

Sorrento isn’t on the Amalfi Coast. 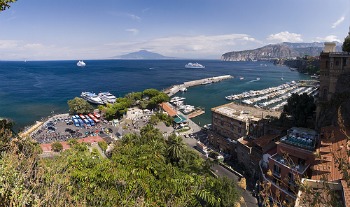 There’s actually a town called “Amalfi” on the Amalfi Coast. 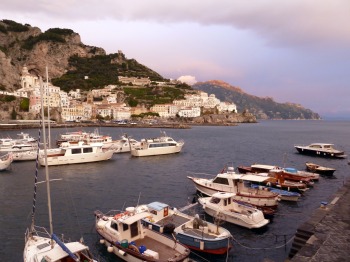 As if the whole “Sorrento isn’t part of the Amalfi Coast” thing wasn’t confusing enough, there’s a difference between saying you’re going to Amalfi and going to the Amalfi. The former means the town of Amalfi, the latter means the Amalfi Coast as a more general area – of which the town of Amalfi is a part.
This tidbit of information isn’t just for impressing friends at cocktail parties, either – it can be quite useful if you get on a bus in (for instance) Sorrento and ask if it goes to Amalfi (meaning the whole area) – many of the buses leaving Sorrento for the Amalfi towns do stop in the town called Amalfi, but not all of them do. Know your Amalfis – it will help you immensely.
>> This list of random/weird facts about the town of Amalfi is pretty fun – more food for cocktail party conversation!.

There are no trains serving the Amalfi Coast. 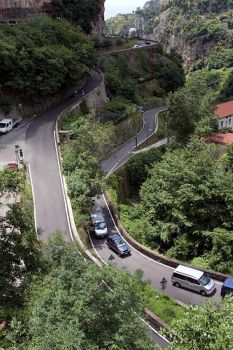 Many readers of WhyGo Italy may be accustomed to me recommending train travel in Italy whenver I have the opportunity to do so, but you probably also recall that there are times when I say the trains aren’t the best or most efficient option. When it comes to the Amalfi Coast, they’re not an option at all.
There’s no train service along the Amalfi Coast. You can get as far as either Sorrento or Salerno by train, but then you have to take a bus, take a boat, or rent a car. Buses are the primary mode of transport between the towns of the Amalfi Coast, especially because they run year-round – as you’ll see below, relying on the boats only works when the weather is good.
And although people who love to drive may salivate over the twisting curves of the Amalfi Coast road, I strongly encourage you to learn more about driving in Italy and see if you can find a good guide to driving in the Amalfi area – the bus drivers who dominate these roads don’t have much patience for drivers who don’t know what they’re doing.

Boats only run “in season” (and even then, not always). 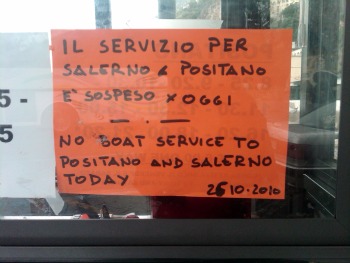 Most of the towns on the Amalfi Coast have ports, and any town that has a port has boat service connecting that town with the others in the region. But the weather on the Amalfi Coast isn’t sunshine and rainbows 365 days a year, and the water isn’t always calm – so it’s not surprising that those boats don’t always run.
The regular boat season in and out of most of the towns along the Amalfi Coast runs roughly from May through October, although boats will often start as early as Easter weekend (depending on when Easter is that year). The season is weather-dependent, as well, so even if it’s technically during a month when the boats should be running there can be days when all boats are canceled because of inclement weather and rough seas.
If you’re planning boat excursions (especially during the shoulder seasons), keep an eye on weather reports to see if you might need to change your itinerary a bit. Boat service is usually canceled first thing in the morning, and a sign will be posted where you would go to buy boat tickets.

The Amalfi Coast is expensive. 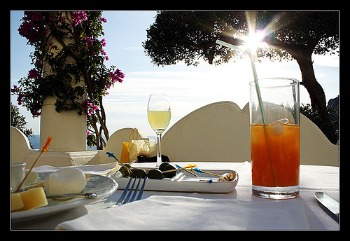 This won’t surprise anyone who has read even a little bit about the Amalfi Coast, but it bears repeating – this is an expensive area to visit. During the high season restaurants and hotels can be very steeply priced, but even in shoulder seasons and the off-season you’ll find high prices.
Avoiding the most popular towns in the high season will help save you a bit of money, but the Amalfi Coast is small and there are only so many places you can go. If you’ll be visiting for any length of time you might opt for a vacation rental instead so you can cook for yourself. Shopping in the markets for provisions isn’t nearly as costly as eating out, especially in the Amalfi Coast.

Not all towns along the coast have much in the way of a “local” population. 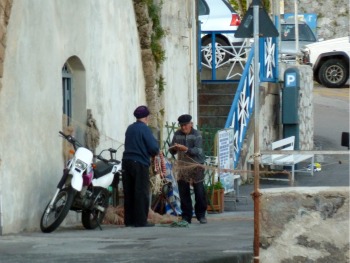 Probably the most famous town on the Amalfi Coast is Positano, that many-layered town known as much for its thousands of stairs as its stunning views. But Positano is almost entirely inhabited by tourists in the high season, and therefore far quieter during the rest of the year than some of the other Amalfi Coast towns.
Amalfi is one of the only towns right along the coast that has a substantial “local” population year-round (in fact, many of the people who work in Positano live in Amalfi), making it a good base if you’re visiting the area in the off-season. There won’t be as many tourists, and yet shops and restaurants will still be open to cater to the people who live there.

English is practically the default language. 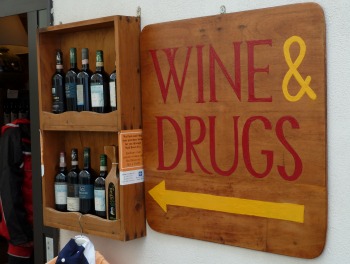 In my experience, you don’t need to be a fluent speaker of Italian in order to learn a few polite phrases that will make people appreciative that you’ve made an effort. On the Amalfi Coast, however, you may never get a chance to use even those few phrases.
The Amalfi Coast was around long before the tourist crowds, but they know who’s buttering their bread these days and they make every effort to be welcoming. English is the default language of the majority of the waitstaff in restaurants, shops, hotels, and at the boat terminal. I never noticed the bus drivers speaking English, but I think that’s because they were generally surly.
Even during a late October visit – a time that should be well outside the usual tourist season – I was greeted with English almost everywhere I went. I didn’t see a single menu that wasn’t translated into English, and everyone involved in the tourist industry either directly or tangentially spoke at least a little English. I’d still suggest that you learn a few niceties, but don’t be surprised if you never really get to use them.

Just because a street looks pedestrian-only doesn’t mean it is. 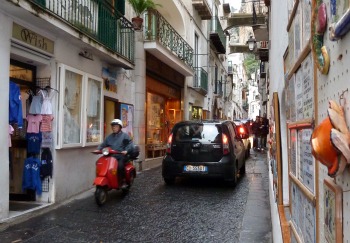 The Amalfi Coast is so famously laid-back, the kind of place you imagine there’s nothing to do but lie on the beach, where movement is only required when you need to walk to and from where you’re staying to get to the beach itself. But remember, not everyone here is on vacation – some people do live here, and they aren’t necessarily the meandering sort. Not only that, most of them have cars.
Cobbled central squares are common throughout Italian cities, and they’re so often pedestrian-only that you’d be forgiven if you looked at (for instance) Amalfi’s cathedral-facing square and assumed it was off-limits to cars. You’d be wrong, though. The whole main artery of Amalfi is a street used by cars, despite its narrow width. It’s one-way traffic only, switching off as the lights at opposite ends of town go from green to red and back again.
What this means is that there’s a long lull between bursts of car and scooter traffic, but when it comes it’s not moving slowly. Those folks have waited a long time for that green light, and they don’t hesitate when they get it.
The lesson here is to be alert when you’re in the Amalfi Coast – that sweet cobbled one-lane street may not be so quiet after all.

Not all of the Amalfi Coast is beachside. 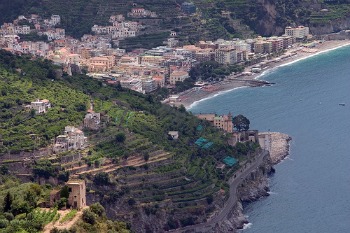 We hear the word “coast” and we think “beach” – which makes sense, until you see the Amalfi Coast and all those high cliffs. Yes, some of the Amalfi Coast towns are on the water and have beaches, but some of them are perched high above those beaches. There are merits to both, but it would suck to book a holiday in a town atop the mountain if your primary goal is to lie on the beach.
The towns on the water with beaches include Amalfi, Atrani, Cetara, Furore, Maiori, Minori, Praiano, Positano, and Vietri sul Mare. Towns higher up on the cliffs include Agerola, Ravello, Scala, and Tramonti.

There’s more to do on the Amalfi Coast than lie on the beach. 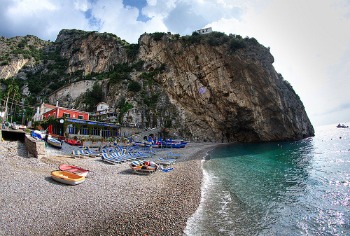