Where to Buy Italy Train Tickets

We’ve covered lots of train-related topics here at WhyGo Italy, but one that’s been overlooked – until now – is where to buy your Italy train tickets. In some countries, you can buy train tickets from newsstands and whatnot, but in Italy that’s not the case. You do have a few options for where to buy Italy train tickets, however, and they’re outlined below.
>> Learn more in my master guide to Italian train travel

ShowBookingWidget();
Not long ago, buying tickets online for Italian trains wasn’t easy, because the official Trenitalia site only let those with Italian credit cards make purchases. There were one or two sites that made it possible, but always at the highest ticket prices – which always looked expensive next to the discount fares you could see (but not buy) on the Trenitalia site.
Now, WhyGo Italy has a partnership that allows anyone to buy Italian train tickets at the same prices available on the Trenitalia site, whether you’ve got an Italian credit card or not. You can buy tickets up to about 90 days in advance (although some people have trouble buying more than 60 days in advance), and the tickets we sell are e-tickets – so there’s no delay in receiving them.
You can search for the tickets you need using the box on the right. Keep in mind that any routes that aren’t entirely within Italy will be paper tickets and will need to be shipped to you – so make sure there’s enough time for you to receive the tickets before you leave home.
Why buy tickets online in advance?
Buying online before your trip gets you access to the discounted fares Trenitalia offers for advance purchases, and eliminates the need to wait in lines at the train stations. If your itinerary is entirely fluid, however, with no planned stops whatsoever, buying in advance won’t work for you.
>> Learn more about how to buy Italy train tickets 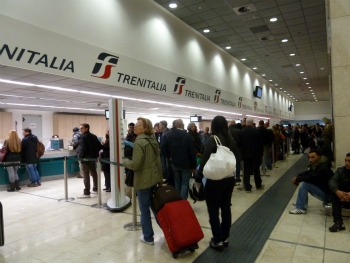 The tried-and-true method of buying train tickets from the people who staff the ticket windows in train stations all over Italy has worked for decades – and it still works today. No matter how big or small a train station is, there will be someone on hand selling tickets (as long as you’re there during the open hours, that is), and in bigger cities and more touristy areas the chances are pretty good there will be someone who speaks a little English, too. It’s still a good idea to know the key phrases you’ll need in Italian – a phrasebook comes in handy when buying train tickets.
While buying tickets at the station just before you travel is easy to do, it’s not always a quick process. During the high season and in touristy areas especially, lines to buy tickets can be incredibly long. It’s daunting to arrive at the station a half-hour before the train you want is scheduled to leave, only to be faced with a line that’s clearly taking more than 30 minutes to get through.
Keep in mind that you can buy tickets at any ticket window, no matter whether you’re traveling from that city. In other words, if you get lucky with an English-speaking ticket seller at the ticket counter in Florence and there’s no line behind you, you can buy tickets for your Rome-Naples train ride later in your trip – as long as it’s a Trenitalia train, they can print out and sell you the tickets.
Why buy tickets at the station’s ticket window?
Buying train tickets in Italy at train station ticket windows is reliable – it’s something you know you’ll always be able to do. It’s also the only option that lets you ask questions, so if you’re trying to decide between a couple of routes or you need more clarification on which trains require reservations then going to the ticket counter is your best bet. Finally, if the automated machines won’t take your credit card because it doesn’t have an electronic chip in them, the ticket windows may be your only option. If you’re pressed for time before your train leaves, however, you might find the potentially long lines more than a little irritating.
>> Learn more about how to validate an Italian train ticket 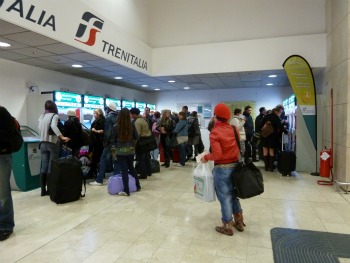 Most train stations throughout Italy now have automated ticket machines in addition to the usual ticket windows. There are a few variations on the ticket machines, and you’re apt to find that one is pretty much always out of order, but these machines let you make last-minute travel decisions and don’t require waits in super-long lines.
The most common ticket machines you’ll find in Italian train stations say “Biglietto Veloce” (Fast Ticket) on the top. The transaction can be done in several languages, so just choose the UK flag for English to get started (or whatever language you like) – then it’s easy to go through the steps necessary to buy whatever tickets and reservations you’ll need.
The automated ticket machines take credit cards (Visa and MasterCard), and sometimes take cash if you’d rather go that route. You may still need to validate your ticket after buying it at the machine, but if it comes with a specific date and time then it’s likely you don’t need to validate it. When it doubt, ask… Or just validate it anyway – because that’s a fine you’d be smart to avoid.
Why buy tickets at the station’s automated machines?
Buying train tickets at the automated machines in Italian train stations is great for anyone who doesn’t have questions about the tickets they’re buying. If there’s a line at the machine – not uncommon at rush hour, during high season, or in busier stations – it will always move faster than the line at the ticket windows. Just be conscious of the line forming behind you – be prepared to make your purchase at the machine when it’s your turn. If you’ve got questions about what to buy, it’s better to get to the station early enough to wait in the ticket window line and talk to a ticket agent. Also note that newer machines – and, presumably, all machines eventually – don’t always accept credit cards that don’t have an electronic chip in them. Cards from the US don’t have this chip, so if your card isn’t working in the machine, you’ll need to go to the ticket window.
>> Learn more about buying train tickets in Italian train stations 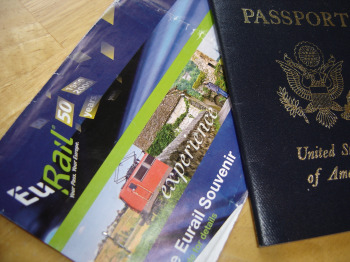 Many years ago, the common wisdom was that buying an Italy Rail Pass before an Italy trip wasn’t a good value – buying city-to-city tickets as you traveled was always going to be the better deal. That’s still true sometimes, depending on the routes you’re traveling, but most of the people I talk with these days would benefit from buying an Italy Rail Pass for their trips. Basically, anyone who’s taking only high-speed (i.e. expensive) trains and taking (usually) 3+ train trips would likely save money by buying a rail pass.
The trouble is that you can’t buy an Italy Rail Pass in Italy – you have to do it before you leave home. So it won’t do you any good to realize that you’d be better off with a rail pass once you’ve touched down in Italy and you’re looking at train fares. The nice folks at the ticket counters in Italy’s train stations won’t be able to help you out.
Do your research before you leave home – it takes a bit of math to figure out whether an Italy Rail Pass is a good deal for your specific trip – and make sure to allot enough time to receive your pass, since it has to be mailed to you.
Why buy an Italy Rail Pass?
Buying an Italy Rail Pass is a great option for travelers who know they’ll be taking enough train rides on the expensive trains in Italy, even if they don’t know specifically where they’ll be going (passes aren’t route-specific). For anyone who’s got more time than money, however, and will be sticking to the slower – and cheaper – trains, it may not be a good idea.
>> Learn more about when to buy an Italy Rail Pass
Here’s a video showing you a bit more about what to expect from Italian train stations. Be warned, it’s a hand-held video, and a little jarring to watch, but the information is good!